SYRIA: Anybody except Islamists

HRWF / Le Vif/L’Express (10.10.2017) – During Ignatius Ephrem II Karim’s recent visit to Belgium, where he met King Philip, he stated that the solution to the Syrian crisis must come from within the country. During his interview with Gerald Papy for the Belgian weekly magazine Le Vif/L’Express, he further argued that in the meantime, it is better to have the secular regime of Bashar al-Assad than a religious government under Islamist rule.

On 19 June 2016, Ignatius Ephrem II Karim, a resident of the city of Damas in Syria, escaped a suicide attempt that took place at a Christian event in Qamishli, located in the north-east of the country. This same attack resulted on the death of three people, as well as five injured individuals. 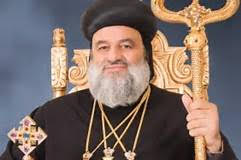 The Syriac Orthodox Church was constituted from the first Christian communities, and its apostolic seat was established in 37 by Saint Peter. Ignace Ephrem II Karim is the 122nd successor to the head of the apostles.(*)

See below a section of the interview, translated by Human Rights Without Frontiers.

Their daily life is improving but Syrian Christians continue suffering due to incessant violence. To provide an example, our district, located in the ancient part of Damas, remains under the threat of a small group of rebels entrenched two kilometers from our district. From time to time, they fire mortars on our street.

Concerning the life of Christians, it is no different from the life of others.: everyone is trying to regain control of their life.

What is the current situation outside Damas?

The situation is improving. New areas, such as Deir ez-Zor, have been regained from the terrorists’ yoke. Other areas which have been retrieved from terrorist control include regions along the border with Lebanon, as well as the cities of Aleppo and Homs, among others. In fact, the territories under the control of the Syrian army have more than doubled.

A number of Christians who live in the north-east of the country, which is under the rule of Kurds, are also in a difficult situation due to the unilateral management of these regions by the local powers. These Christian communities are also under pressure concerning military service and school education. For example, Kurds try to impose their school programs in our private schools.

Do you not trust Kurdish leaders?

We believe in a unified Syria with both a strong government and a strong army to protect us all. Kurds are a small minority in the north-east of the country. Even in Qamishly and Hasakah, two big cities in the region, they only constitute a minority: merely 30% of the population. This is why we do not believe there is a future for a federal state in Syria.

What do you think of the possibility of acquiring some autonomy?

We are in favour of a united Syria. Not even all Kurds agree on the idea of pushing forward a project of autonomy.

How important is the recapture of Deir ez-Zor by the governmental troops for the future of the conflict?

This is a political and military issue. It is, therefore, not my position to comment on this issue.

I will only sustain that the liberation of Dei res-Zor complicates the projects of those who wish to divide Syria. The governmental army now controls the whole region from west to east. Therefore, it is very important.

Do you support the action of the Syrian Democratic Forces, who are mainly composed of Kurds and are supported by the West? They expelled the ISIS terrorists from a part of the city of Raqqa.

I support any action against terrorism, against ISIS, AL-Nusra Front (the Syrian branch of Al-Qaeda) and all the other groups. Since there is a legitimate government and army, we should all unite to combat this common enemy. The Syrian Democratic Forces should fight in coordination with the governmental army.

What do you expect from Europe?

Europe has an important role to play for the future of Syria, a role it has, unfortunately, not fulfilled since the beginning of the conflict. The EU has not always worked in the interest of the Syrians. Now that a new Syria is emerging, the EU can act positively to ensure that all Syrians are treated equally, regardless of their political orientation, their ethnic identity or their religious beliefs, and a new Constitution should reflect this ambition. This policy must however be implemented in accord with the legitimate Syrian government.

Do you think this new Syria would be prosperous under the rule of Bashar al-Assad?

I envision this new country under the leadership of a president that the Syrians themselves will elect. Bashar al-Assad has always said that if the people no longer wanted him, he would be ready to leave. It is up to the population to decide, not to an external player. The solution must come from inside.

Are free elections possible in Syria?

Yes. In 2014, Bashar al-Assad was elected for a second mandate. Thousands of Syrian refugees in Lebanon went to the embassy to re-elect him. Nobody forced them to do so.

Is there a future for the Eastern Christians?

Christian presence in the Middle East is seriously threatened. Iraq has lost 80% of its Christian population. In Syria, the loss is estimated at 50%. The future of Christians is also particularly obscure. We must do everything we can to keep all those who stayed. We are glad that some Europeans help us with the reconstruction or the maintenance of our schools, our churches, our monasteries… There must be a Christian presence in the Middle East. It is here where our church was founded 2000 years ago. I am convinced that our community will survive but our influence will be reduced, depending on the number of Christians remaining.

What is the Christian contribution to the Arab society?

Since the expansion of Islam in Syria and throughout the region, Christians have helped newcomers to integrate within the state structures, school education… In the 19th and 20th centuries, most schools were actually run by Christians. It was necessary to reach a balance in society. A mono-confessional society is by nature closed and intolerant to others. In Syria, we never had any major problem between Christians and Muslims. Christians had always been well-treated, as we deserved since it is our native land. We were there before anybody else. We have all the religious freedom we need. However, it is a fact that not too long ago, just before the war started, we missed opportunities of political liberalization and freedom of expression. Yet, all Syrians suffered from this, not only Christians. (…)

What do you say to the Christians who opted to join the rebellion?

At the beginning of the conflict, a number of Christians, as well as many others, believed that the demonstrators were sincere and were simply asking for reforms that most of the population wanted. Yet, when they realized that the protests were being abused for other ends by foreigners and religious extremists, they withdrew their support. There are still a few Christians supporting the opposition to the regime but they only represent themselves. They do not represent the majority of the Syrian Christian community.

Full interview published by Le Vif/ L’Express on 29 September 2017 and posted on internet on 4 October: http://www.levif.be/actualite/international/en-syrie-mieux-vaut-tout-sauf-les-islamistes/article-normal-729667.html

(*) According to the last annual report of the U.S. Department of State, the total population of Syria is estimated at 17.2 million, although media reporting suggests this figure is continually declining as large numbers of people leave the country to escape the ongoing civil war. Approximately 74 percent of the population is Sunni Muslim. Other Muslim groups, including Alawites, Ismailis, and Shia, together constitute 13 percent while Druze account for 3 percent of the population. U.S. government estimates put the Christian population at 10 percent of the overall population, although media and other reports of Christians fleeing the country as a result of the civil war suggest the Christian population is now considerably lower.

Most Christians belong to autonomous Orthodox churches, the Eastern Catholic (or Uniate) churches (in full communion with the Roman Catholic pope), or the Assyrian Church of the East and other affiliated independent Nestorian churches. Most Christians continue to live in and around Damascus, Aleppo, Homs, Hama, and Latakia, or in the Hasakah Governorate in the northeast section of the country.