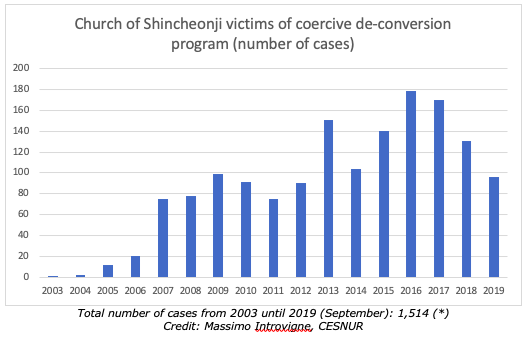 HRWF (19.12.2019) – From 29-30 November 2019, the Center for Studies on New Religions (CESNUR) from Italy and Human Rights Without Frontiers (HRWF) from Belgium hosted a seminar in Seoul titled: “Intolerance and Discrimination Against New Religious Movements: An International Problem.” It highlighted the practice of forced change of religion by non-state actors that occurred in the United States (US) and in Europe during the 1960-1980s, in Japan until recently and is currently occurring in South Korea.

On this occasion, victims of forced change of religion attempts were invited by prominent professors and scholars from the US and Europe to share their experiences (**).

The case of Kim Hyun Kyung, confined during 44 days for a coercive de-conversion program

At the time of the incident, Kim Hyun-Kyung was 23 and was living in Seoul.

It is by a former member of the Shincheonji Church that her parents were told she was attending the religious services of the Shincheonji Church. Her mother consulted a so-called Cult Counseling Center in Guri for advice. A Presbyterian pastor taught her to abduct her daughter and how to confine her ‘safely’ before beginning a de-conversion program.

It took Hyun-Kyung’s mother five months to put all of the details of the operation into place. During the planning and implementation of this confinement, her husband took leave from his job and their younger son interrupted his theological studies for a few months.

A lot of expenses

Hyun-Kyung’s family already had a lot of debt accumulated, and the financial burden of this operation brought them to the verge of bankruptcy. The costs included: a lack of income while the father was on leave, properly equipping a place for the forced de-conversion (which is worth hundreds of thousands of won***), counseling fees, travel expenses (taxi fares), and religious offerings. On many occasions, her mother wanted to give up this project. However, she was always dissuaded by the assistant administrator Shin Hyun-ja of the Guri Cult Counselling Center run by Presbyterian staff who said: “If you give up, your daughter will go to hell, and she will ruin her life…”. This was a clear abuse of weakness when the family was in distress and in a vulnerable position.

The detention house Hyun-Kyung was confined in was situated in the mountains of Anseong. It was a very remote private property covering a large area owned by her grandfather. Steel bars were fixed to windows and toilet doors, and warehouses were built nearby to store supplies for several months. Nobody had access to this property and there was no cell phone coverage.

When the house was ready for the forced de-conversion, the abduction began according to plan. On the night of 20 June 2016, Hyun-Kyung’s mother gave her some fruit. After eating it, Hyun-Kyung partly lost consciousness as she could feel she was being moved to another place but was unable to wake up and resist. Most probably, some sleeping pills had been injected in the fruit. The next morning, she woke up and found herself in a remote house in the mountains. There was no phone, besides one in a locked room. Hyun-Kyung was not allowed to leave the small room she was imprisoned in and there was no sunshine.

To combat suspicion from her friends and future inquiries from police, her mother posted a picture of the family in front of the front door with a message saying they were on a family trip, an instruction from the Cult Counselling Center.

After some time, Hyun-Kyung planned an escape. One day, she seized her opportunity to run away while her family was taking a nap. She ran in the wilderness for about 15 minutes but was finally caught by her father. She screamed, but there was no one to hear her.

One day, a man named director Song, who had forcibly de-converted his daughter through the Guri Cult Counselling Center, brought three people who had also been de-converted to the house. They showed Hyun-Kyung video clips that slandered the Shincheonji Church, claiming it was a necessary step before the intervention of the de-conversion assistant.

On several occasions during this process, Hyun-Kyung’s parents voiced wanting to leave the space of confinement, but the de-conversion assistant coerced them into staying by saying, ‘you don’t know what’s going to happen, so never leave the confined room.’

After some time, de-conversion assistant Shin Hyun-ja considered that the confinement place was too far away for the implementation of the de-conversion program and convinced the parents to move to a location closer to Seoul. Before moving, Shin Hyun-ja requested Hyun-Kyung’ agreement in the form of a voice recording in which she was to state that she was willingly asking to be de-converted. This is a means to avoid future court prosecution. Under the coercion of her family, Hyun-Kyung felt forced to sign.

However, her absence did not go unnoticed. At one point, Hyun-Kyung’s mother filmed a video of Hyun-Kyung telling the police that she was safe. The Cult Counseling Center planned the script that she was forced to say for this video.

After 40 days, the de-conversion assistant Shin Hyun-ja arrived at the new confinement location and spent two days with Hyun-Kyung, pressuring her to leave the Shincheonji Church. Hyun-Kyung knew that the only way to escape was to convince Shin Hyun-ja that she was de-converted, and so she pretended to be. However, Shin Hyun-ja didn’t believe her at first. He tested her by telling her to persuade acquaintances at the Shincheonji Church to contact the Cult Counseling Center.

Against her will, Hyun-Kyung did what she was told, but she suspected that the so-called ‘cult exit counseling’ was fueling a lucrative business. One week later, she was released, but on the condition that she attended follow-up training at the Guri Cult Counselling Center.

On 2 August 2016, while she was going to Guri Cult Counseling Center with her mother for a follow-up training, she met a friend of the Shincheonji Church. With her friend’s help, she called local law enforcement. The police separated her from her family.

Over the next few months, she did not feel safe and was in constant fear of another abduction. She experienced nightmares of being abducted and confined almost every night and she suffered from emotional distress for a long time. Her family struggled after the forced de-conversion as well. Her mother was traumatized by the whole situation, and her father was unemployed for months because he had taken leave for the 44 days of her confinement.

Now, Hyun-Kyung and her parents have restored their relationship. Her mother’s health has improved and her father is back at work. Hyun-Kyung is also doing well in her social and religious life.

However, she regrets that the actors responsible for so much damage to herself and her family cannot be prosecuted and have continued their deceptive and immensely profitable activity. Worse, in their propaganda aimed at other families, “they attribute the failure of their operation to my parents, saying that my parents failed to strictly follow their instructions,” she said at the end of the hearing. 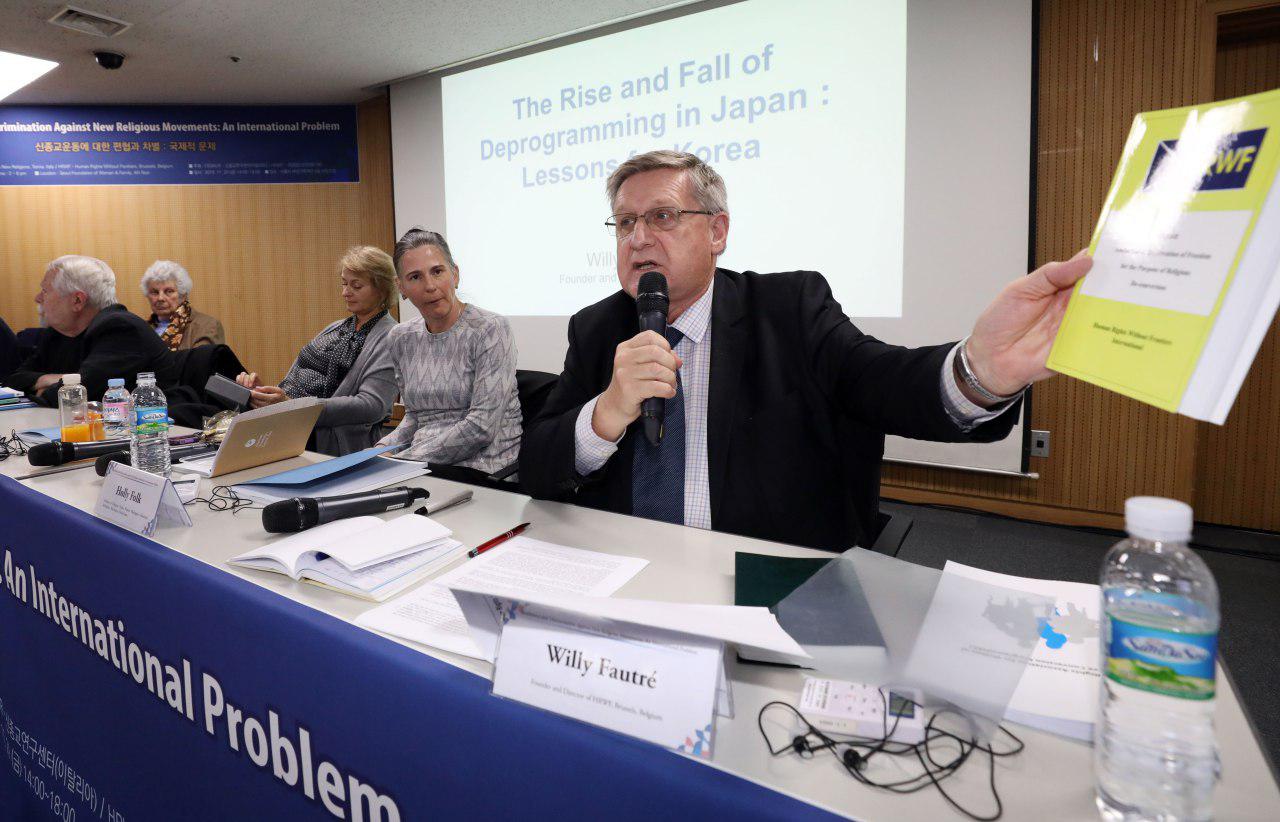 Willy Fautré speaking in November 2019 at the seminar “Intolerance and Discrimination Against New Religious Movements: An International Problem” in South Korea.

(**) Eileen Barker, Professor Emeritus of Sociology with Special Reference to the Study of Religion at the London School of Economics (LSE), UK.

Holly Folk, Associate Professor of Religious Studies at Western Washington University, in the US.

Massimo Introvigne, founder and managing director of the Center for Studies on New Religions (CESNUR) in Turin, Italy.

Gordon Melton, Distinguished Professor of American Religious History at the Institute for Studies of Religion at Baylor University in Waco, Texas, US.

Rosita Sorytè, co-founder and head of the International Observatory of Religious Liberty of Refugees (ORLIR), Lithuania.