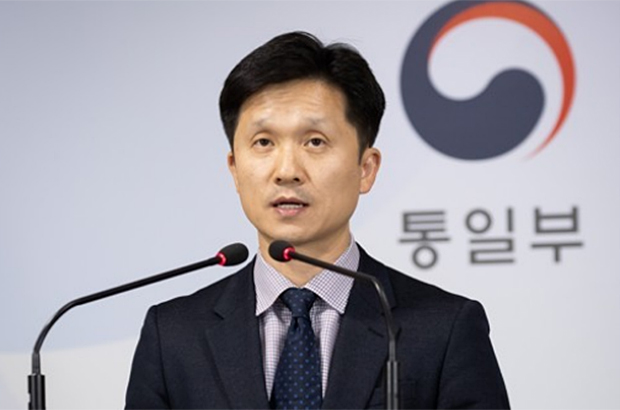 At a press briefing, South Korea’s Unification Ministry spokesman Lee Sang-min reports that two North Korean fishermen that authorities picked up at sea were deported to North Korea on November 7, 2019.

Radio Free Asia (07.11.2019) – https://bit.ly/2KzmgPr – South Korea deported two North Koreans accused of murder to North Korea Thursday, an act that experts and rights organizations criticized as a troubling decision that could send the wrong signal to future asylum seekers from the North.

According to Seoul’s Ministry of Unification, the fishermen killed 16 crew members on their fishing boat prior to being picked up Saturday near the Northern Limit Line, the maritime border between North and South, in waters east of the Korean peninsula.

They were sent back to North Korea at about 3:10 p.m. Thursday through the joint security area in Panmunjom, a first for deportations.

“We decided to deport them after determining that accepting them to our society could pose a threat to the lives and safety of our people and that such criminals cannot be recognized as refugees under international law,” said Ministry of Unification Spokesperson Lee Sang-min, at a press briefing.

South Korean officials said that the two fishermen confessed that they and another crew member killed the captain of the fishing vessel in late October because of his harsh treatment. They then killed the other crew members one by one, dumping their bodies overboard.

According to their account, they tried to return to North Korea, but when they entered a port on the North’s east coast, the other crew member was detained by police.

The other two fled to the South on the fishing boat.

Human rights experts and lawyers told RFA’s Korean Service that deportation was not the way South Korea should have handled the situation.

“I am deeply troubled and deeply disturbed by this development. For more than 20 years, the South Korean government and the people of South Korea, the taxpayers of South Korea, have extended help and naturalization programs to about 33,000 North Koreans,” said Greg Scarlatoiu, executive director of the Committee for Human Rights in North Korea (HRNK).

“What’s really, really troubling is that the South Korean authorities took only three days to issue these two men a death sentence,” he said.

HRNK also issued an official statement Thursday saying that it was deeply concerned over “the first deportation of North Koreans by South Korea since the 1953 Korean War Armistice.”

The statement pointed out that the men were returned to the North against their will, an act that “undermines” the South Korean constitution, which recognizes all North Koreans as citizens of the Republic of Korea, “granting them the right to live in the South and be protected by its legal system.”

Meanwhile, Phil Robertson of Human Rights Watch (HRW) criticized the lack of transparency on the part of the South Korean authorities in determining the pair’s fate.

“The whole story doesn’t quite make sense because the South Korean government at this point should really make available the full information about whatever investigation and questioning they engaged in with these North Korean men before they sent them back,” said Robertson.

“There should be a full review of the investigation that was done to make sure it was, in fact, thorough and impartial,” HRW’s Asia Division deputy director said.

A Washington, DC-based lawyer criticized the deportation, saying that Seoul should have simply tried the men in a South Korean court.

“South Korea claims jurisdiction over all of the South Korean peninsula in its constitution. While I am critical of South Korea’s legal system, because I’ve represented clients who are in that system, it is far fairer and far more humane than the North Korean system, in which there is torture, a complete lack of due process, and where these men can expect the most brutal treatment imaginable,” said Joshua Stanton, who was a member of the U.S. Army Judge Advocate General’s Corps stationed in South Korea between 1998 and 2002.

Stanton said that South Korea might even be in violation of international law by returning the men to North Korea.

“It sounds like a violation against the U.N. convention on torture. Article III of that convention says you’re not supposed to send people back to places that torture people,” he said.

He maintained that the men should be deemed innocent until proven guilty.

“You don’t know that someone is a danger to society or a murderer until you give them a trial. You can never assume a person’s guilt,” he said, adding, “Arrest them. Indict them. Give them their day in court,” he said.

“You have legitimized a system in North Korea that routinely tortures, that denies due process, that punishes with extraordinary brutality. South Korea has now implicitly recognized that that is a legitimate justice system and it is not.”

Robertson was very critical of the South Korea’s president Moon Jae-In, saying the deportation was yet another example of the administration’s poor record in dealing with North Korea on human rights issues.

Jung Gwangil, a former official at a North Korean trading company who now runs a human rights organization based in South Korea, told RFA that he believed that Seoul gave the men up so quickly to placate the North over other issues in the fractious inter-Korean relationship.

“It doesn’t make sense at all. I think the [South Korean government] offered them up to North Korea as a sacrifice, since North Korea is so adamant about the Mt. Kumgang issue,” said Jung, referring to Kim Jong Un’s recent order to demolish South Korean buildings at an inter-Korean tourist resort.

Experts see the controversial demolition order as Kim’s deliberate lashing out at the South over its unwillingness to decouple itself from the United States’ push to get North Korea to dismantle its nuclear weapons program.

CORRECTION: An earlier version of this report incorrectly attributed some of Robertson’s comments to Scarlatoiu.