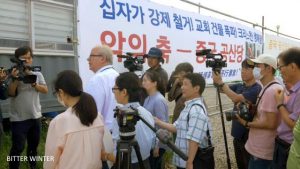 Mr. Zoehrer between demonstrators and journalists

Bitter Winter (05.09.2018) – https://bit.ly/2NPBQ9b – Bitter Winter has reported in the last few days about false “spontaneous demonstrations” organized in South Korea against The Church of Almighty God (CAG)by Chinese Communist Party (CCP) executives who came from China for this purpose, with relatives of CAG asylum seekers they had “persuaded” to join them and local anti-cultists led by pro-Chinese activist Ms. O Myung-ok. For a fortunate coincidence, the Austrian journalist Peter Zoehrer, secretary of FOREF (Forum for Religious Freedom Europe), was in Seoul for collecting material about CAG members who suffered torture in China, and was able to document and photograph the events for Bitter Winter.

On September 4, 2018 at 10:00 AM, thanks to the mediation of the police, Ms. O and her colleagues had to allow the CAG members to meet their relatives. As they reported to Peter Zoehrer after the meeting,  the CAG members explained to their relatives that it was their own free decision to flee to South Korea, where they can practice their religion openly, because of the Chinese Communist regime’s inhumane persecution of the CAG in China, and that they are totally free to come and go as they please. When in turn CAG members asked their relatives questions, for instance, who told them they were held against their will by the CAG, why the relatives came to Korea now, and who brought them there and paid their tickets, and so on, they just dodged the questions.

At the same time, Ms. O kept making trouble outside the premises of the CAG under the pretext of “seeking for relatives.” On September 4, 2018, at 1:15 PM, led by Ms. O, about twenty demonstrators drove to the CAG worship building located in Chungcheongbuk-do. They hung up banners along the roadsides in front of the Church building and got ready for another demonstration against the CAG. Simultaneously, KBS and CBS, the two leading Korean media, were also on site to follow up and report the demonstration. Unlike the one in Onsu on September 2, this demonstration was not attended by any Chinese relative of the CAG asylum seekers.

At 1:48 PM, a middle-aged demonstrator (male, in his 50s) jumped onto the rear of a truck and yelled, while some others echoed his shouting with sporadic words (in Korean). During the time, Ms. O walked up to the man and kept whispering to him. Then the man took out a prepared paper and shouted out the texts.

Shortly after the demonstration had begun, others came in a vehicle and joined the demonstrators. The women among them were in headscarves, while the men were of tanned skin. They didn’t look like Korean. The police officers asked why they were there, and they answered they were “called to come” but didn’t know what to do next. The police told them a demonstration was in progress there and that they’d better leave. They quickly left.

At 1:53 PM, a lawyer representing the CAG went out of the building to remind the demonstrators that they had crossed the legal limitations of their demonstration and trespassed on the premises of the CAG. He requested the demonstrators to move away from their truck that was parked in front of the CAG building together with their banners. The leading demonstrator became hysterical and began to yell. He refused to move the truck under the pretext of not having the key and angrily confronted the lawyer. Having no choice, the CAG members had to call the police to solve the problem.

A few minutes later, the police arrived to deal with those demonstrators and asked them to leave.

At 2:21 PM, Ms. O and her people had to move away from their truck and banners. The demonstrators marched to the west. At that time, only a handful of demonstrators remained in front of the CAG building and they were scattered along the roadside opposite the CAG premises. The entire demonstration lasted half an hour only and ended in failure.

At 2:50 PM, Peter Zoehrer appeared at the entrance of the Worship Building. KBS, CBS and other TV stations asked to interview him. Ms. O saw the reporters invited by her surround Mr. Zoehrer for the interview, and soon packed up and left. The presence of a foreign journalist was not part of her, or CCP’s, plans.

At 3 PM, the reporter and the producer of KBS Cheongju conducted an in-depth interview with Mr. Zoehrer at the security office of Worship Building. The reporter raised questions such as, whether the CAG is persecuted in China, whether CAG members fled to South Korea because of the persecution, and what Mr. Zoehrer knows about the human rights situation of CAG refugees. Mr. Zoehrer explained that nobody can seriously dispute that the CAG is persecuted in China and that its members fled to South Korea to escape persecution. Their families were disrupted, but this was the fault of the CCP rather than of the CAG. When he was asked about how he learned about the persecution of the CAG, Mr. Zoehrer replied that he learned it through his studying the CAG for more than a year. He also mentioned that, during his personal interviews with several CAG members, he found their persecution stories very credible. He also explained that CAG members are preparing affidavits about the abuse and torture they suffered in China. Mr. Zoehrer also mentioned the leaked internal document from CCP published by Bitter Winter on how to conduct demonstration against CAG in South Korea, and how his script was faithfully executed by Ms. O. He added that, as an eyewitness to the events, it was pretty obvious to him that most demonstrators were hired thugs with no knowledge whatsoever of the CAG.

Zoehrer concluded: “The Founding Fathers of the US were European Puritans who went all the way to America because they couldn’t have religious freedom in Europe. This is why, especially in America, they never forget the importance of religious freedom. This is no different, CAG members come to South Korea under very difficult circumstances, for the sake of finding freedom, religious freedom, finding their human rights.” The entire interview lasted for an hour and a half. 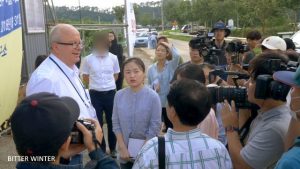 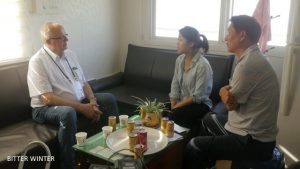