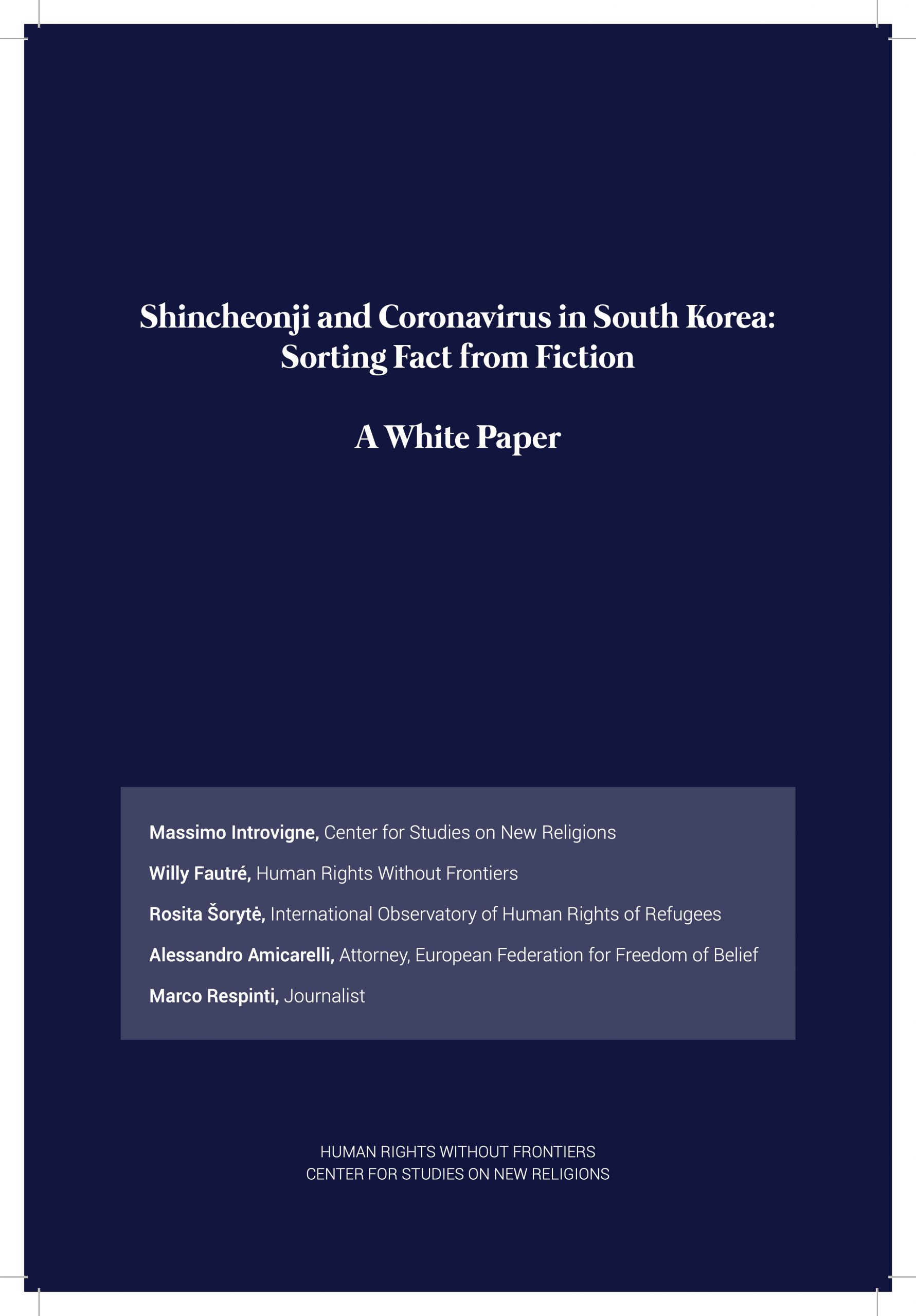 “ We are scholars, human rights activists, reporters. and lawyers, all with a substantial experience in the field of new called “cults” by their opponents). Some of us have studied the Korean Christian new religious movement known as Shincheonji Church of Jesus, the Temple of the Tabernacle of the Testimony (in short, Shincheonji).

We are concerned with the vast amount of inaccurate information circulating about Shincheonji and its involvement in the coronavirus crisis in South Korea. We have interviewed members of Shincheonji and Korean scholars, and examined documents from both the South Korean government and Shincheonji. We have prepared this white paper to help international organizations, the media and other concerned parties to better understand the situation. None of us is a member of Shincheonji, nor do we adhere to its theology. But theological criticism should not be confused with discrimination or violation of human rights.

South Korea: Was the Shincheonji Church really responsible for the spread of COVID-19? CESNUR and Human Rights Without Frontiers publish a study

Brussels, 17.03.2020 (CESNUR/ HRWF) – With a virtual press conference (due to the restrictions to public events in Belgium), CESNUR, the Center for Studies in New Religions directed by Italian sociologist Massimo Introvigne, and Human Rights Without Frontiers, the Belgian NGO led by Willy Fautré, presented a white paper on Shincheonji and Coronavirus in South Korea: Sorting Fact from Fiction. The study is signed by

“It was a new experience, explained Introvigne, due to the virus we had to interview members of Shincheonji and scholars of Korean new religions via Skype. Personally, I was the only Western scholar who had published about Shincheonji and felt a responsibility to correct inaccurate information that spread from one media to the next. Shincheonji’s theology is certainly distinctive, as it believes that some of the events described in the Bible’s Book of Revelation already happened in South Korea and that its founder, Chairman Man Hee Lee, is the ‘promised pastor’ who will guide humanity into the Millennium. However, it is not distinctive in its theology of the Millennium, a thousand-year kingdom without illness or death, an idea shared by millions of conservative Protestants. And it teaches that, since we are not yet in the Millennium, hospitals, doctors, and medicine are needed. Some members of Shincheonji work in hospital themselves, and it is totally false that Shincheonji’s devotees regard themselves as invulnerable to sickness or refuse modern medicine or medical tests when needed.”

Šorytė and Fautré stated that Protestant fundamentalism is strong and politically active in South Korea, and very much disturbed by the growth of Shincheonji, a movement they regard as “heretic” and that grows mostly by converting Korean Protestants. “Well before the coronavirus, Šorytė explained, they have tried to have Shincheonji banned in South Korea.” “And they have taken the law into their own hands, added Fautré. Parents have kidnapped and detained their adult sons and daughters, and fundamentalist pastors have tried to ‘deprogram’ them and ‘de-convert’ them from Shincheonji. The practice attracted international condemnation when, in 2018, a female Shincheonji member was killed by her father when she tried to escape the deprogramming.” Fautré also introduced a book he just published on the practice of forced conversion in South Korea.

Amicarelli explained that what is certain about Shincheonji and the virus is that Patient 31, a female Shincheonji member from Daegu, was hospitalized after a minor car accident on February 7, diagnosed with a common cold, and sent to her normal life, where she attended several Shincheonji services and set in motion a chain of events leading to thousands of her church’s members being infected. Only on February 18, as her symptoms got worse, she was hospitalized again and tested positive to the virus. “Patient 31, Amicarelli said, claims that nobody told her about a possible virus infection before February 18, and that the claim by the hospital’s doctors, who understandably try to cover themselves, that she was offered the test twice before and refused, is false. The doctors could have forcibly quarantined her before February 18, but didn’t. At any rate, in hours after it learned about Patient 31, Shincheonji closed all its churches in the country.”

The White Paper also goes into details about the lists of more than 200,000 members of Shincheonji that the government requested from Shincheonji and that were handled within six days. It quotes the statement by Korean deputy minister of Health, Kim Kang-lip, that there is “no evidence that Shincheonji supplied incomplete or altered lists,” although they did include some mistakes, as it is normal in such huge compilations.

“It is also true, Fautré stated, that some members tried to hide their affiliation with Shincheonji, although the movement’s instructions were to cooperate with the authorities. But we should consider that in South Korea admitting that you are a member of Shincheonji may get you beaten or fired from your job.”

“Did Shincheonji make mistakes? Introvigne concluded. Yes, and Chairman Lee admitted them publicly. Shincheonji may have been slow to realize the magnitude of the problem, that threatened its very existence as well as Korean public health. But these mistakes do not amount to criminal negligence, and scapegoating an unpopular movement for an epidemic is something we have already seen in history.

Fundamentalist Christians hope that the virus may do what they failed to achieve for decades, put a halt to Shincheonji’s growth that happens at their expenses.”

The authors noted that the U.S. Commission on International Religious Freedom expressed yesterday similar concerns about the scapegoating of Shincheonji.