HRWF (26.11.2019) – Earlier this year, HRWF interviewed a young man and his mother in Seoul about a kidnapping attempt for the purpose of forceful de-conversion. After this attempt, Tae Kyun KIM ran away from home and did not contact his family for two months. His mother shared with HRWF the technical and financial details of her involvement with the Presbyterian Church masterminds of the whole operation.

A painful confrontation between a son and his loving mother

Tae Kyun was very close to his parents before he was kidnapped in 2013. He is tall and athletic, and he was a boxer at that time boxing. 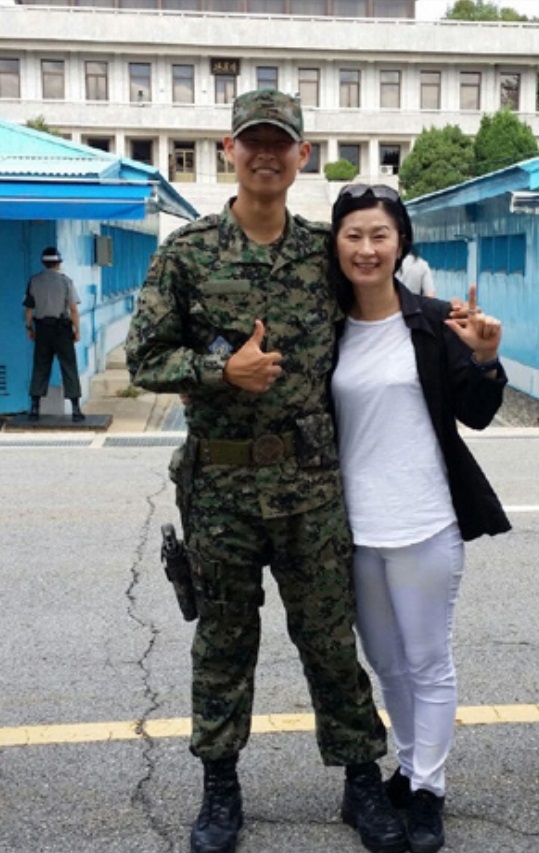 Tae Kyun Kim and his mother at the DMZ

Tae Kyun was 19 when he started to attend the Shincheonji Church. He followed the required Bible classes from December 2012 until June 2013 and passed an examination that qualified him as a registered member. At that time, he was a student at the police academy and was supported by his mother but she did not know what type of church her son was in.

After some time, she became suspicious and even aggressive with her son. Tae Kyun was very disturbed by his mother’s behavior because she had never acted this way before.

His mother then sued the evangelist of the Shincheonji Church in charge of the Bible studies on the grounds that he was still under age. Eventually she dropped the charges and sought an alternative strategy. She contacted a deacon of the Presbyterian Church, Mr. Yong Su PARK (of Bethel Church, Gwangju).

During this conversation, the deacon recommended that she have her son kidnapped and confined until he recants his new faith, which is an illegal and prosecutable offense.

Deacon Yong Su PARK promised to recommend a number of strong men for the abduction since Tae Kyun was a boxer. He advised her to rent an apartment far from home and to confine her son during the de-conversion session. However, before starting his program he needed Tae Kyun to sign a statement that he was willingly asking for so-called ‘exit counselling’.

Deacon Yong-Su PARK informed her that it would take about 70 days to plan and carry out the kidnapping and the confinement of her son.

After much preparation, the attempt took place in July 2013. While traveling to a family dinner by car, Tae Kyun became suspicious that he was being abducted. He escaped once the vehicle stopped. After this incident, he decided to live with some friends and cut off ties with his family. He only revived communication with his mother 1 or 2 months later.

By that time, Tae Kyun’s mother greatly regretted the decision to attempt a kidnapping and forced de-conversion. She asked for forgiveness and they were able to restore their good relationship. Tae Kyun is now a blue-collar worker, while also busking and performing in musicals.

“My name is Mi-Jeong PARK. I am a mother who tried to force her beloved son into a coercive de-conversion program.

When my son began attending the Shingcheonji Church, I respected his decision and our family lived happily without any problem. However, one day, I heard rumors from my acquaintances regarding this Church. I was shocked and alarmed by those rumors. I was introduced to a pastor under the Christian Council of Korea and he referred me to a so-called ‘cult counseling center,’ which I visited.

March 2013: Instructions about the kidnapping, confinement and de-conversion procedure

At the ‘cult counseling center’ in Buk-gu Samgak-dong, I had a meeting with three people: Pastor Gang, who claimed to be a ‘cult counselor’, evangelist Im and another female evangelist.

The ‘cult counselors’ maliciously slandered Shincheonji Church and uttered shocking personal attacks. They planted anxiety and fear in my heart and made it impossible for me to make a rational decision. After hearing all of that, any parent would have been desperate to do anything ‘to get back’ their beloved child. I too trusted the ‘cult counselors’ and decided to have my son de-converted.

The de-conversion fee was between 1-3 million KRW (770 – 2310 EUR) minimum, but they proudly stated that they had received 5 million, 10 million and even 20 million KRW from other parents.

Their de-conversion business was planned meticulously. They said that the program was comprised of a total of 45 subjects and would take 1 to 3 months to complete successfully. They said that the location of the de-conversion process must be a studio or a pension in a desolate area no more than 2-3 hours roundtrip from the city of Gwangju, such as Suncheon, Hwasun, Gokseong or Gochang.

I conveyed that I would like to de-convert my son at home. However, they told me about a recent case where a young woman who was in the process of de-conversion jumped off the 4th floor of a building. Her father also jumped in an attempt to catch her. Since the my apartment was on the 16th floor, the ‘cult counselor’ said the program cannot happen there. They told me to find a studio or a guest house that has no more than three floors.

They also informed me of the case of the kidnapping of a female college student from Chonnam National University.

The cult center reassured me that they provde phone assistance 24h a day, and that I would receive assistance to overpower my son if necessary. They also recommended that I open a new landline with a different number when calling instead of using my current cellphone.

They explained to me how to physically kidnap my son. They recommended forcing him into a car, taking away his cellphone and searching him thoroughly, from his outwear to his undergarments, in case he is hiding a location tracker. They explained that when we reached the confinement place, we should tie my son’s arms and legs together with my and my husband’s arms and legs during the sequestration period. They emphasized that I must harden my heart as if he is not my child even if he cries and begs to leave.

Finally, for their legal safety as “cult exit counselors’, they needed a contract form signed by the parents. I understood it was a guarantee for the payment of their services. Then, they also needed the person who was to be de-converted to sign a declaration stating that he or she willfully was asking for the assistance of the de-conversion task force (self-proclaimed ‘exit counselors’).

They shared that parents have occasionally sued them in the past, but they triumphantly boasted that they are always released if they are summoned because they have good friends in the police force.

May 2013: Executing the instructions of the ‘cult exit counselors’

I loaded one month’s quantity of food in the trunk of my car, chose a day for the kidnapping and did everything I had been instructed to. My family and the ‘cult exit counselors’ decided to execute the 70-day kidnapping and confinement plan.

I enticed my son into the car with a meeting with the evangelist he was studying the Bible with. Then, we headed to a pension in Boseong. After my son got in the car, his uncle forcefully took his phone, as had been suggested. My son tried to open the locked door several times, screaming to let him out.

When we arrived at the pension, he started to run as fast as he could. At one point he turned around and said, “Mum, don’t follow me”. I was frozen there. My heart broke as I watched him run further and further away.

As a result of this first phase of the de-conversion program, my son rejected me. I called the ‘exit counselors’ to update them and their callous response was: “oh, he is done now”.

The next day I received a call from my son. He was crying and said, “why are you listening to others instead of listening to a single word your son has to say? You are not like that, Mum.” After his phone call, I was filled with immense regret about what I had done.

I went back to the Shincheonji Church that my son attended. After seeing the teachings of the Church, I realized that the ‘cult exit counselors’ had lied to me the whole time. They use religion and their positions as religious leaders for the sole purpose of deceiving people and filling their pockets. They exploit the love parents have for their children, instill fear and anxiety in their minds, and push them to perpetrate illegal acts that destroy their families.

I almost lost my son and gave a significant amount of money to these ‘cult exit counselors’.

At this very moment there are parents who are preparing to send their adult children to a forceful de-conversion program. As someone who has attempted this and deeply regrets it, I would like to tell them this: “Look at your children straight. Listen to them sincerely. They are your children. You raised them properly. They did not change all of a sudden. Engage in a conversation with them and treat them as the adults they are.” 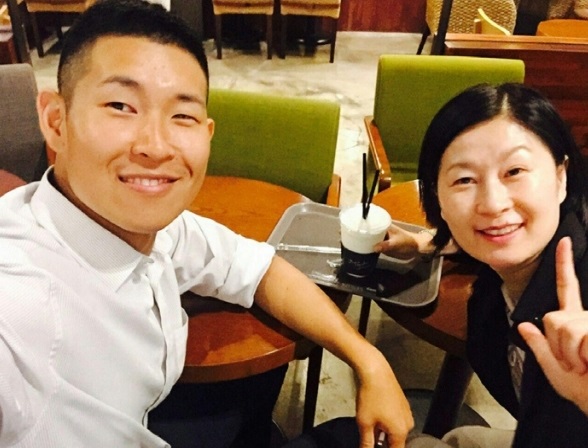 HRWF does not defend any religion or belief system, but defends the right of a person to have the beliefs of her/his choice as is guaranteed by Article 18 of the UN Universal Declaration.

ANNEX: What is the Church of Shincheonji?

Shincheonji Church of Jesus Temple of the Tabernacle of Testimony (Shincheonji in short) is one of the largest Korean Christian new religious movements. The Church was founded in 1984 in South Korea by Chairman Man Hee Lee and currently has more than 200,000 members in 29 countries.

Shincheonji teaches that it is the promised church in the Bible, destined to appear during the fulfillment of the Revelation prophecies. It also teaches that, when the prophecies are fulfilled, the messenger of Jesus, i.e. Chairman Man Hee Lee, will start a new religious world to spread the gospel of the fulfillment of Revelation and to heal all nations. Because of its original theology and rapid growth, the Church encountered hostility from traditional Christian denominations.

On 25 May 2013, Chairman Man Hee Lee established the Heavenly Culture, World Peace, Restoration of Light (HWPL) and proclaimed The Declaration of World Peace.

On 18 September 2014, HWPL organized the World Alliance of Religions’ Peace Summit in Seoul.

In 2017, HWPL was granted special consultative status at the United Nations Economic and Social Council (ECOSOC).

Willy Fautré: “I interviewed Tae Kyun Kim together with his mother in Seoul.
Several years ago, I interviewed about 30 victims of parental kidnapping, confinement and forceful de-conversion attempts during long sequestration periods in Japan. I interrogated a lady belonging to the Unification Church in Japan together with her father who had kidnapped her for the purpose of de-conversion. I asked the father if he regretted what he done. He answered that he did not. I asked his daughter if she could forgive her father for what he had done and she answered ‘I am trying to.’