HRWF (10.02.2020) – The Republic of Korea has committed to abide by the International Covenant on Civil and Political Rights (ICCPR), which says in article 18.2: “No one shall be subject to coercion which would impair his freedom to have or to adopt a religion or belief of his choice.”

Consequently, the South Korean authorities are legally bound to prohibit any type of coercion exerted by a group or an individual forcing converts to a new religious movement to recant their faith. They are bound to prosecute anyone who is:

The authorities must also ensure that there are appropriate remedies available and accessible for victims of such cases.

However, for two decades now political and judicial authorities in South Korea have turned a blind eye to forced change of religion operations masterminded almost exclusively by Presbyterian Churches.[1] The purpose of these Church-backed programs is to combat what they label ‘heresies’ and ‘heretics,’ by any means, including illegal ones, and at any cost. Under cover of this doctrinal conflict, a theological cleansing campaign has been gaining momentum since the beginning of this century.

How did Human Rights Without Frontiers (HRWF) become involved with the issue of forced change of religion in South Korea?

HRWF became involved in South Korea’s issue of forced change of religion in 2018 when it received a call for assistance. Someone in Seoul had discovered HRWF’s report “Japan: Abduction and deprivation of freedom for the purpose of de-conversion” which was published in the early 2010’s. This report described a similar phenomenon of coercive de-conversions that had affected thousands of members of the Japanese Unification Church (UC) over the course of 40 years. This is what scholars in religious studies labeled ‘deprogramming.’

Through intensive advocacy efforts, HRWF was the main contributor to the eradication of this evil practice despite the passivity of Japan’s legislative, executive and judicial authorities, and the silence of the Japanese media and international human rights organizations.

In 2019, Willy Fautré, director of HRWF, traveled twice to South Korea to meet with about 15 former Presbyterian Protestants who had converted to the new Bible-based religious movement of the Shincheonji Church.

Statistics about the extent of this phenomenon in South Korea are non-existent. The only available numbers are those of known victims who escaped from their confinement and de-conversion program or confirmed their beliefs in Shincheonji after pretending to be de-converted to escape. The Shincheonji Church has collected their testimonies over the years, but it is safe to say that there are likely a large number of victims who have never been identified. The infographics that follow were published by the Shincheonji Church and provide some clarity as to the extent of the phenomenon. 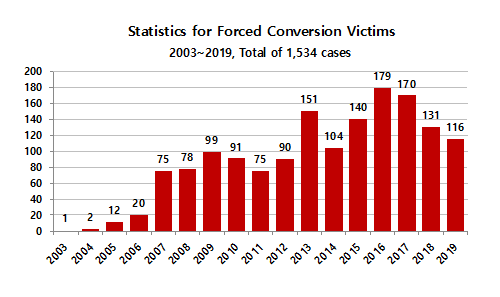 It is evident that the pattern of family kidnapping and confinement for the purpose of coercive de-conversion is now well established.

When family members research the Shincheonji Church online they find ‘anti-heretical’ and ‘anti-cult literature’ demonizing the Shincheonji Church and other new religious movements. They are then filled with anxiety and fear, and often look for help. They can easily find ‘cult exit counseling centers’ online that are organized by Presbyterian evangelists, missionaries and pastors. These individuals are working to bring ‘lost sheep’ back to the Presbyterian Church because there is a lot of competition between religions in South Korea.

This misinformation fuels panic in the minds of family members and, consequently, they begin preparations for a de-conversion program. Information sessions are held to train the parents on necessary steps, which include illegal activities such as kidnapping and confinement. These services are not free.

During the first phase of the operation, parents are informed that they will have to organize the kidnapping of their son or daughter and choose a well-equipped place where no escape is possible. Afterwards, they will have to extort a signature from their son or daughter on a statement declaring that they have willingly asked for the de-conversion services of a ‘cult counseling center’ and are voluntarily joining a so-called ‘religious de-conversion program.’

The Presbyterian activists working within this national network of ‘cult counseling centers’ have a policy to never intervene if the individual has not signed this agreement.

The Presbyterian Church adopted this policy after the Shincheonji Church started to sue some of their de-conversion activists. They now train their evangelists to organize meetings and consultations with parents so as to distance themselves from legal liability. Sometimes the de-conversion sessions are conducted with former Shincheonji members.

In concrete terms, Presbyterian pastors at a higher level are THE masterminds behind the scenes of these kidnapping, confinement and coercive de-conversion operations. They never participate directly in these activities, which are illegal and prosecutable under the criminal code. They leave this to family members.

The agreement that must be signed before beginning a de-conversion program is also left to family members to obtain. The pastors turn a blind eye to the way this is accomplished, which can include: blackmail, threats, psychological and physical pressure, violence, and detention.

When the de-conversion program can ‘officially’ start, the work is assigned to lower-ranking activists specifically trained for that purpose. The higher-level masterminds of these operations ensure they cannot be prosecuted.

Why is forced change of religion ‘tolerated’ in South Korea?

The first reason is religious. Shincheonji has been a fast-growing movement at the expense of the Presbyterian Church since the beginning of the century. The fight against a ‘heretical’ group by Evangelical and Pentecostal pastors was first tolerated and then encouraged behind the scenes by the leaders of their denominations.

The second reason is cultural. Parents in South Korea, and in other countries in East Asia, feel entitled to some level of authority and control over their adult children, despite their age, competency or social status.

The third reason is political. The Presbyterian Church is politically conservative and opposed to the Communist regime of North Korea. The weight of Presbyterian voters in elections in South Korea is significant. Turning a blind eye to the illegal activities of a number of their leaders is politically safer than challenging them publicly.

In light of international human rights law, the individual right to freedom of thought and conscience, freedom of religion or belief, and freedom of movement have been and still are grossly violated on this issue in South Korea.

The religious, cultural and political context cannot justify actions such as kidnapping, confinement and forced change of religion of adults. The argument of so-called ‘family discussions’ to justify such actions or of ‘protective custody’ to de-convert them under physical and psychological coercion has been unambiguously condemned as incompatible with human rights principles.

In 2012, the Concluding Observations of the UN Human Rights Committee (HRC) about Japan’s Universal Periodic Review played an important role in conveying a strong message to the authorities in Tokyo. The same practice had enjoyed total impunity for four decades, resulting in thousands of victims. The HRC declared that: “The State Party should take effective measures to guarantee the right of every person not to be subject to coercion which would impair his or her freedom to have or to adopt a religion or belief.”

HRWF therefore recommends a multi-dimensional strategy to eradicate this phenomenon in South Korea:

HRWF does not debate the merits of religions or beliefs, or align with any specific religion, theology or worldview. HRWF defends the right of all people to have the beliefs of their choosing as guaranteed by Article 18 of the UN Universal Declaration of Human Rights.

The pastors, evangelists and missionaries active in the “Korea Christian Cult Counselling Association” are mainly from the conservative Hap-dong and Kosin Presbyterian Churches.

[2] There are also cases when the husband organized the kidnapping and confinement before the de-conversion program. See the chapter “10 Case Studies” for specific examples of this.