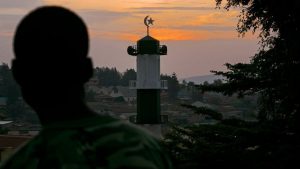 BBC News (15.03.2018) – http://bbc.in/2FHdPgn – Rwanda has banned mosques in the capital, Kigali, from using loudspeakers during the call to prayer.

They say the calls, made five times a day, have been disturbing residents of the Nyarugenge district, home to the capital’s biggest mosques.

But an official from a Muslim association criticised it, saying they could instead keep the volume down.

Last month, around 700 churches were closed for not complying with building regulations and noise pollution.

The majority of Rwandans are Christian. Muslims make up around 5% of the population.

The government says the Muslim community has complied with the ban.

“I have found that they have begun to respect it and it has not stopped their followers from going to pray according to their praying time,” Havuguziga Charles, a local official from Nyarugenge told the BBC’s Great Lakes service.

Most of them were small Pentecostal churches, and one mosque was also closed.

The government says the reason is that some preachers “deceive their congregation with misleading sermons”, AFP reports.

But some preachers have accused the government of trying to control their message to congregants in a country accused by human rights groups of stifling free speech.