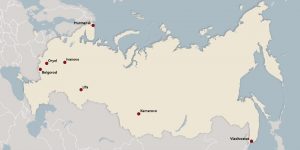 JW.org (02.05.2018) – https://bit.ly/2FHACIo – Police in at least seven cities across Russia have conducted aggressive raids against Jehovah’s Witnesses. In what appears to be a coordinated campaign, special police forces (OMON), at times wearing masks and carrying machine guns, raided Witnesses’ homes, pointed guns at them, and detained both young and old for interrogations.

Over the past year, authorities have launched at least ten criminal investigations and jailed five Witness men, including Dennis Christensen, who has been in pretrial detention since May 25, 2017. Another Witness, 69-year-old Arkadya Akopyan, is currently on trial in the Republic of Kabardino-Balkaria. All could face prison sentences of from two to ten years merely for meeting together for worship.

On April 20, 2017, the Supreme Court of the Russian Federation banned the Administrative Center of Jehovah’s Witnesses and all 395 of the Witnesses’ local legal entities. During the Supreme Court hearing, the Russian government claimed that although it was liquidating the legal entities of Jehovah’s Witnesses, individual Witnesses would be free to practice their faith. However, the government’s claim is inconsistent with its actions.

Now that Russian authorities have successfully liquidated the legal entities of Jehovah’s Witnesses and have begun confiscating the Witnesses’ properties, they are turning their attack and focusing on people and their worship. It is now becoming a criminal offense for the over 175,000 of Jehovah’s Witnesses in Russia to practice their faith.