RUSSIA: Dennis Christensen behind bars for 6 years: Outcry of the international community

HRWF (11.02.2019) – HRWF joins the US Commission on International Religious Freedom (USCIRF), the Council of Europe (CoE) and the European Union in demanding Mr Christensen to be released immediately and unconditionally.

Additionally, HRWF urges the European Parliament to adopt a resolution denouncing the egregious violations of religious freedom in Russia.

CoE (07.02.2019) -The co-rapporteurs of the Parliamentary Assembly of the Council of Europe (PACE) for the monitoring of Russia, Telmo Correia (Portugal, EPP/CD) and Angela Smith (United Kingdom, SOC), have expressed serious concern at the conviction and sentencing to six years imprisonment, by the Zheleznodorozhniy District Court, of Dennis Christensen for “organising the activity of an extremist organisation” on the grounds that he is a practising Jehovah’s Witness.

“Mr Christensen’s conviction and imprisonment for nothing more than peacefully practising his faith is an unacceptable violation of the right to freedom of religion,” said the co-rapporteurs. They emphasised that the European Court of Human Rights has already, on previous occasions, ruled in favour of Jehovah’s Witnesses’ right to worship without interference from the Russian authorities.

In addition, the co-rapporteurs reiterated concerns expressed by PACE about the abuse and arbitrary application of the so-called “extremism law” by the Russian authorities. They expressed their hope that Mr Christensen’s conviction would be overturned without delay by the appeals court and called on the Russian authorities to release him pending an appeal.

European Union: Statement by the Spokesperson of Federica Mogherini on the sentencing of Dennis Christensen

EEAS (06.02.2019) – Today, a Russian court in the city of Oryol sentenced Mr Dennis Christensen, a Danish citizen, to 6 years of imprisonment.

Mr Christensen was arrested in 2017 when Federal Security Service agents raided a peaceful religious meeting of Jehovah’s Witnesses in Oryol. He has been convicted on grounds of ‘organising extremist activity’, which amounts to exercising his right to freedom of religion as a Jehovah’s Witness. A number of other criminal cases against Jehovah’s Witnesses are also currently pending. No one should be imprisoned for peaceful acts of worship in the expression of their religious beliefs.

The European Union expects Mr Christensen to be released immediately and unconditionally. Jehovah’s Witnesses, as with all other religious groups, must be able to peacefully enjoy freedom of assembly without interference, as guaranteed by the Constitution of the Russian Federation, as well as by Russia’s international commitments and international human rights standards. 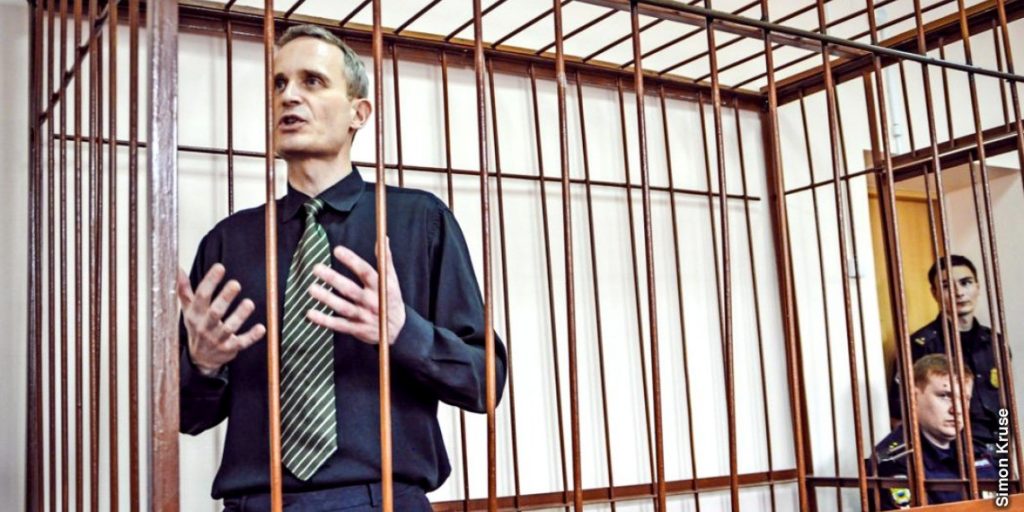 USCIRF (07.02.2019) – Kristina Arriaga, Vice Chair of the United States Commission on International Religious Freedom (USCIRF), today condemned the decision by a Russian court to convict and sentence Dennis Christensen, a Jehovah’s Witness, to six years imprisonment on charges of “organizing the activity of an extremist organization.

“Dennis Christensen’s conviction represents the continued deterioration of religious freedom in Putin’s Russia,” said Arriaga, who advocates on behalf of Mr. Christensen as part of USCIRF’s Religious Prisoners of Conscience Project. “Evidently, it’s not enough for the state to brand peaceful groups like the Jehovah’s Witnesses ‘extremist’; it must also imprison their members. Russia must enter the 21st century and respect religious freedom as a fundamental human right.”

In June 2016, following a trend of repression of religious minority communities throughout Russia, a regional court in Oryol, where Mr. Christensen resides, branded the local Jehovah’s Witnesses branch an “extremist” group. On May 25, 2017, state security forces disrupted a Jehovah’s Witness prayer service, detaining some 70-80 people for several hours and arresting Mr. Christensen, alongside 15 Russian citizens. Mr. Christensen had appeared in court more than 50 times before being convicted on February 6. He has already spent more than 622 days in Detention Facility No. 1 in the Oryol Region.

In 2018, USCIRF again recommended that Russia be designated a “country of particular concern” (CPC) under the International Religious Freedom Act. In November 2018, the U.S. State Department placed Russia on a Special Watch list for “engaging in or tolerating severe violations of religious freedom.”

In all, more than 40 peaceful believers were in prison in Russia in 2018.

In 2018, Russia was in Tier 1 of HRWF Database of FORB prisoners of conscience per country (https://hrwf.eu/forb/forb-and-blasphemy-prisoners-list/) *