RUSSIA: 44 Jehovah’s Witnesses in prison for their faith, according to report by HRWF 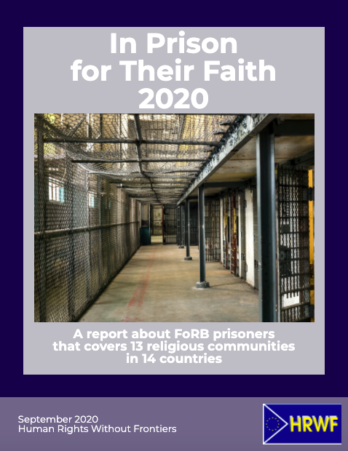 HRWF (11.11.2020) – Many Jehovah’s Witnesses are behind bars in Russia for the peaceful exercise of their religious freedom according to a report published by Human Rights Without Frontiers (HRWF)[1].

The report exposes the reasons behind this persecution of Jehovah’s Witnesses, analyses data, explains the articles of the Penal Code misused to convict them, and provides a few examples of advocacy by the US Department of State, the European Union and Jehovah’s Witnesses’ lawyers.

The last update of HRWF’s Database of Jehovah’s Witnesses in prison in Russia dated 10 November comprises of 44 documented individual cases, a statistic confirmed by JW.ORG.

The Reasons for the Persecution of Jehovah’s Witnesses in Russia

As of July 2018, the US government estimated the total population of Russia to be 142.2 million. A 2015-2016 poll by the Pew Research Centre reported that 71% of the population is Orthodox Christian, while 10% identify as Muslim.[2] According to the international headquarters of the Jehovah’s Witnesses, their movement in Russia, which was legalised in 1991, is comprised of 395 local branches and 175,000 members.[3]

This ruling was the last stage of an increasingly repressive policy starting in the early 2000s when the National Security Concept was extended to the spiritual realm.

The spiritual security concept is closely associated with the persisting Soviet paranoia of ‘foreign’ enemies and ‘foreign’ ideas. On 20 July 2012, President Vladimir Putin signed the so-called ‘foreign agent law’ that requires non-profit organisations that receive foreign funding and allegedly engage in ‘political activity’ to register and declare themselves as ‘foreign agents’. Russian human rights NGOs fell into that category and so were forced to stigmatise themselves publicly. The concept of a ‘foreign agent’ quickly extended to religious organisations of foreign origin. Concretely, this spiritual security concept resulted in a religious cleansing policy that targets movements perceived as a threat to the identity of the Russian people and the Slavic and Orthodox Christian values. The door was opened to a sacred and natural alliance between the Kremlin and the Russian Orthodox Church, the main beneficiary of President Putin’s spiritual security policy.

Simultaneously, the criminalisation of violent extremism progressively evolved until it included a vague concept of extremism without violence. This was condemned by the United Nations, the Council of Europe and its Venice Commission, the Organisation for Security and Co-operation in Europe (OSCE) and other transnational institutions. Proselytism became ‘propaganda of exclusivity, superiority or inferiority of a person on the basis of their religious affiliation or attitude toward religion’, and an alleged form of extremist activity. As a result, any discourse or debate on spiritual topics, whether this concerns critiquing or considering the merits of a religion, could be characterised as extremist activity.

Anti-extremist measures include the prohibition of materials (books, videos, websites) on the grounds that they promote the superiority of one religion over others. This prohibition may be penalised with fines for believers and organisations for distribution of (or even possession ‘with intent to distribute’) prohibited materials under the Code of Administrative Offences. Believers may be prosecuted for inciting religious hatred, followed by a warning to the religious organisation about the impermissibility of extremist activities. Furthermore, a religious organisation may be subject to liquidation and prohibition for extremism, and its believers prosecuted for continuing the activities of the banned organisation.

The Russian Orthodox Church, the Catholic Church and other mainstream religions that have been part of Russia’s history such as Islam, Judaism and Buddhism are not targeted by the spiritual security concept and the anti-extremism laws. New and dissenting religious movements that are not controlled by these established religions are the victims of this legislation, especially Jehovah’s Witnesses.

Jehovah’s Witnesses in Prison in Russia

Jehovah’s Witnesses represent the highest number of religious prisoners in Russia. Their movement is banned and so are their publications. They are arrested and convicted as extremists for leading religious meetings in private houses as well as for possessing and distributing the publications of their movement.

Jehovah’s Witnesses behind bars: some statistics

As of 1 June 2020, HRWF documented 34 cases of Jehovah’s Witnesses in its Prisoners’ Database.[4] However, in total there were 93 people on trial on charges of ‘continuing the activities of a banned extremist organisation’ because they had exercised their right to freedom of religion and belief. At least 20 of the 93 individuals on trial were above the age of 60. Investigators had also blocked more than 200 Jehovah’s Witnesses’ bank accounts.[5]

In their 2019 annual report, the Jehovah’s Witnesses reported that over the course of that year 313 members had been charged, put on trial, or convicted for involvement in the group, and that Russian authorities had conducted 489 raids on the private homes of their members.[6]

Articles of the penal code

The two main articles in the Russian criminal code used by the judiciary to sentence Jehovah’s Witnesses are:

Article 282.2: Organisation of or participation in ‘the activity of a social or religious association or other organisation in relation to which a court has adopted a decision legally in force on liquidation or ban on the activity in connection with the carrying out of extremist activity’.

Article 282.3, Part 1: Financing of extremist activity. Offences under this article incur large fines or prison terms of up to eight years.[7]

The US Department of State had credible information that Yermolayev and Tkach were involved in torture and/or cruel, inhumane, or degrading treatment or punishment of Jehovah’s Witnesses in Surgut, Russia. On 15 February 2019, officers of the Surgut Investigative Committee, led by Yermolayev and Tkach, subjected at least seven Jehovah’s Witnesses to suffocation, electric shocks, and severe beatings during interrogation.[8]

On 12 March 2020, the European Union issued a Statement on the situation of Jehovah’s Witnesses in the Russian Federation and allegations of torture and ill-treatment at the Organisation for Security and Co-operation in Europe (OSCE) Permanent Council in Vienna.[9]

On 1 May 2020, the UN Working Group on Arbitrary Detention adopted an Opinion (A/HRC/WGAD/2020/10) condemning the raids, arrests, detention and trials of 18 Jehovah’s Witnesses, stating that it ‘wishes to emphasize that none of them should have been arrested and held in pre-trial detention and no trial of any of them should take or should have taken place’.[10]

Finally, Jehovah’s Witnesses in Russia have filed 57 applications with the European Court of Human Rights. Thus far their efforts to end these unjust imprisonments have been unsuccessful.[12]

[1] The report “In Prison For Their Faith 2020” covers five countries where there are Jehovah’s Witnesses in prison: Eritrea, Russia, Singapore, Tajikistan and Turkmenistan (https://bit.ly/3knfFqi).

[4] Our Database is updated on a regular basis. For more details about imprisoned Jehovah’s Witnesses, see https://hrwf.eu/prisoners-database/.

[11] “Imprisoned for Their Faith: Russia”, Jehovah’s Witnesses.org, accessed May 2020. https://www.jw.org/en/news/legal/by-region/russia/jehovahs-witnesses-in-prison/.

[12] “Imprisoned for Their Faith: Russia”, Jehovah’s Witnesses.org, accessed May 2020. https://www.jw.org/en/news/legal/by-region/russia/jehovahs-witnesses-in-prison/.