HRWF (24.04.2018) 38-year old, London resident, Alexander Adamescu, may face extradition to Romania in the coming weeks despite a series of corrupt trials and the death of his father in Romanian prison.

Alexander Adamescu’s name first became of interest to Romania’s National Anti-corruption Directorate (DNA) in June 2016 following the imprisonment of his father, Dan Adamescu on charges of bribery and corruption.

The charges against Alexander Adamescu arose shortly after the state was slapped with a GBP 200 million arbitration claim for the purposeful destruction of a group of companies controlled by Dan Adamescu.

From the initial charges against Alexander Adamescu, the hearings and investigations have been riddled with corruption.

For example, in one hearing, Alexander Adamescu was summoned only at the door of the court, thirty minutes prior to the hearing. Within thirty minutes after the trial, the judge had apparently read 37 arch level files of prosecution materials, had deliberated on the arguments of both sides, taken a decision, admitted an arrest warrant, and had submitted his decision on the court electronic system.

Unfortunately, such circumstances are not rare in Romania; concerns regarding fair trials and prison conditions are constants across the country. According to EAW laws, extraditions should not be conducted when human rights abuses are disputable in the receiving country.

The increasingly interconnectedness of the National Anti-corruption Directorate (DNA), the national intelligence service (SRI), and judges, magistrates, and other judicial authorities across the country are of high concern.

The wide use of phone-tapping, corruption, influence of judges, and faking evidence have all come to light as common practice within these institutions, which in turn are clear violations of human rights.

These issues are well-known, as the debate in Romania is highly public. The Chief Prosecutor of the DNA is currently being investigated for corruption, and the Secretary General of the SRI is facing calls to resign after the media exposed that he had been contacting judges via Facebook about ongoing trials.

In such a context, is it implausible to assume that those who face charges in Romania will receive a fair trial.

Furthermore, Romania’s record of extended and unjustified pre-trial detention, paired with overcrowded prisons and facilities which do not meet international standards, contributes to concern.

In 2017, Romania remained a prolific human rights abuser with the most cases brought before the ECtHR of any EU country, and of the 47 nations of the Council of Europe – Romania fell just behind Russia, Turkey, and Ukraine.

The majority of these cases involved the prohibition of torture or inhuman treatment, a lack of effective investigation, and the right to a fair trial.

As of 1 January 2018, Romania even surpassed Russia and Turkey in the number of pending applications allocated to the judicial formation. 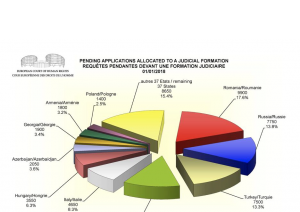 Given this record, the UK courts would be at contention with EAW laws.

Even more worrying is that if Alexander Adamescu is extradited, he will face grave human rights violations during subsequent trials, and while in prison.