ROMANIA: A window of opportunity for corrupt justice system in #Romania?

EU Reporter (12.06.2018) – https://bit.ly/2t53bLA – At the end of May, the Constitutional Court of Romania ruled that President Iohannis must dismiss the country’s chief anti-corruption prosecutor, Laura Kovesi, after allegations of her involvement in multiple violations of the rule of law. As the Constitutional Court’s rulings are binding, a glimmer of hope has emerged, offering a golden opportunity to improve Romania’s currently abysmal corruption record, writes  Lea Perekrests of Human Rights Without Frontiers.

The call for Kovesi’s dismissal reached a crescendo in February 2018, when the Justice Minister presented a 36-page report detailing illegal activities for which Kovesi is responsible. Justice Minister, Tudorel Toader concluded his presentation by summarizing that Kovesi is guilty of “excess of authority, discretionary behavior, defying the Parliament, challenging the Constitutional Court’s decisions and authority…[which are] acts and facts that are intolerable in a rule of law”. 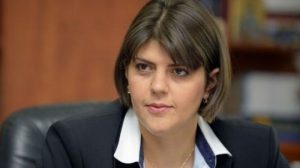 Since Laura Kovesi’s appointment as chief anti-corruption prosecutor, the National Anti-corruption Directorate (DNA) has been able to flaunt impressive statistics to the European Commission; it has achieved a conviction rate of over 90%, and more asset freezes, arrests, and convictions than any other counterpart agency in the EU. While the European Commission has praised these numbers at their face value, they have failed to look deeper and recognize the numerous unlawful activities that prop these numbers up.

In order to achieve ‘praiseworthy’ success rates the DNA has abused institutional structures and employed questionable tactics, which have ultimately robbed Romanian citizens of their right to a fair trial.

Institutional links between the DNA, Romanian Intelligence Service (SRI), judicial branches, and judges themselves, have all been revealed over the past few years, bringing serious concern to the organization of institutional structures and their ability to provide fair trials.

Worryingly, it has also been reported that the DNA and SRI have used questionable tactics, including unconstitutional phone tapping, the intimidation of judges, falsifying evidence, targeting suspects’ family members, and producing propaganda against suspects.

Bringing to light the severity and depth of these tactics, it was revealed in February 2018 that two top DNA prosecutors had been recorded faking evidence, planting evidence in people’s homes and cars, changing witness declarations, faking official documents, and blackmailing witnesses, all under the instruction of Laura Kovesi.

Currently, the SRI Secretary-General, Dumitru Dumbrava, is also facing calls to resign after media reports revealed that he was contacting and influencing judicial officials presiding over DNA cases via Facebook.

Impacts for Romania: A window of opportunity?

The cases brought forth by the DNA under Laura Kovesi have shown a pattern of unlawful activity, including: failing to assume innocence, unfair judicial processes, forced confessions, threat of indictments, and extended pre-trial detention periods.

The lengthy pre-trial detention periods are also of high concern given the deteriorating prison conditions and high rates of torture cases being presented to the ECtHR.

In 2017, Romania had the highest number of cases brought before the ECtHR than any other country in the EU. Twenty of the 69 cases involved the prohibition of torture or inhumane treatment, and twenty-six involved either a lack of effective investigation, the right to a fair trial, or the length of proceedings.

An overall deeply disturbing, neo-Ceausescu picture emerges when looking further behind the DNA’s success rates. At a moment when Romania is seeking to further integrate into the European Union, the necessity to investigate and reform is paramount. It would be negligent of the European Commission to turn a blind eye to the disturbing nature of Romania’s anti-corruption fight as it seeks to join the Euro and Schengen.

The Constitutional Court of Romania’s recent decision to require Kovesi’s removal opens a window of opportunity for the country to reform the corrupt institutions that are meant to safeguard the rights of Romanian citizens. It can allow the country to hit the reset button and enable a truly effective system for tackling corruption.

It is now in the hands of the Romanian government to reverse its current Kovesi-era path of unfair trials and unsafe convictions and to build institutions and leaders that can both guarantee Romanian’s their human rights and ensure corruption is tackled firmly but fairly.