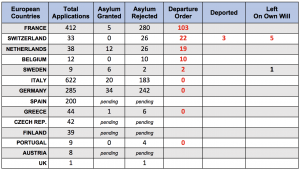 HRWF (11.12.2017) – Hundreds of members of the Church of Almighty God who have left their country in search of a safe haven have been denied political asylum in Europe and are under threat of being sent back to China where they will be arrested and sent to prison for years.

A preliminary research by Human Rights Without Frontiers covering 13 EU member states and Switzerland shows that Italy, France, Germany and Spain are the four European countries that are perceived by these religious asylum-seekers as Promised Lands. However, their hopes have been short-lived. As of 1 December 2017, the situation was as follows:

France had rejected 280 requests for asylum out of 412 and issued 103 orders of departure but had not deported any of them. Only 5 applications were accepted. Pending cases: 127.

In Italy, 622 applications were introduced, the highest number in Europe. Twenty were accepted, 183 were rejected but nobody was deported. Pending cases: 419.

In Germany, most of the applications were rejected: 242 out of 285. Nobody had received a departure order. Thirty-four refugees were granted asylum. Pending cases: 9.

In Spain, the 200 applications for asylum are pending.

Switzerland had not granted asylum to any of the 33 applicants, had turned down 26 requests and issued 22 orders of departure. Three were deported and five decided to leave the country. It is known that one of them was arrested as soon as he arrived at the airport in China. Pending cases: 7.

In the Netherlands, 12 people out of 38 were granted asylum while 26 applications were turned and 19 orders of departure were issued. Nobody has been deported yet.

In Belgium, 12 members of the Church of Almighty God applied for asylum. Ten of them were denied asylum and received an order of departure. The two other cases are pending.

In Sweden, 6 members of the Church of Almighty God out of 9 were granted asylum. Two received a negative answer and an order of departure. The other case is pending.

In Greece, 1 refugee was granted asylum out of 44 and six received a negative answer. All the other cases are pending. Nobody was deported or got an order of departure.

In Portugal, out of 9 applications 4 were turned down but nobody received an order of deportation. The other cases are pending.

The UK has rejected the only application it had received but no order of departure was issued.

The Czech Republic, Finland and Austria respectively received 42, 39 and 8 applications. They are all pending.

The Church of Almighty God is a new religious movement created in 1991 in China.

While their members are victims of state violence in China, Beijing’s propaganda is demonizing their movement. The academic journal The Journal of Cesnur has published a research work of Dr Massimo Introvigne refuting Beijing’s fake news and fake accusations against the Church of Almighty God (See  http://cesnur.net/wp-content/uploads/2017/09/tjoc_1_1_6_introvigne_ter.pdf).

In 2004, the United Nations High Commissioner for Refugees published guidelines on religion-based refugee claims (http://bit.ly/2BtCRgn). These guidelines clarify that new and non-traditional religions are entitled to the same protection as mainline religions; that individuals should not prove that they have been individually persecuted and a general pattern of persecution against their religious group is sufficient; and that “persecution” should be broadly interpreted, including prohibition to freely practice and propagate one’s religion.

The Church of the Almighty God fulfills these conditions. Human Rights Without Frontiers (Brussels) calls upon the EU member states and Switzerland to grant political asylum to their members.