Rape and no periods in North Korea’s army 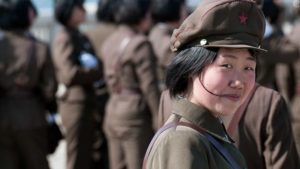 BBC (21.11.2017) – http://bbc.in/2B351i2 – For almost 10 years Lee So Yeon slept on the bottom bunk bed, in a room she shared with more than two dozen women. Every woman was given a small set of drawers in which to store their uniforms. On top of those drawers each kept two framed photographs. One was of North Korea’s founder Kim Il-sung. The second was of his now deceased heir, Kim Jong-il.

It was more than a decade ago that she left, but she retains vivid memories of the smell of the concrete barracks.

“We sweat quite a bit.

“The mattress we sleep on, it’s made of the rice hull. So all the body odour seeps into the mattress. It’s not made of cotton. Because it’s rice hull, all the odour from sweat and other smells are there. It’s not pleasant.”

One of the reasons for this was the state of the washing facilities.

“As a woman, one of the toughest things is that we can’t shower properly,” says Lee So Yeon.

“Because there is no hot water. They connect a hose to the mountain stream and have water directly from the hose.

“We would get frogs and snakes through the hose.”

The daughter of a university professor, So Yeon, now 41, grew up in the north of the country. Many male members of her family had been soldiers, and when famine devastated the country in the 1990s she volunteered – motivated by the thought of a guaranteed meal each day. Thousands of other young women did the same.

“The famine resulted in a particularly vulnerable time for women in North Korea,” says Jieun Baek, author of North Korea’s Hidden Revolution. “More women had to enter the labour force and more were subject to mistreatment, particularly harassment and sexual violence.”

To begin with, buoyed by a sense of patriotism and collective endeavour, the 17-year-old Lee So Yeon enjoyed her life in the army. She was impressed with her allocated hairdryer, although infrequent electricity meant she had little use for it.

Daily routines for men and women were roughly the same. Women tended to have slightly shorter physical training regimes – but they were also required to perform daily chores such as cleaning, and cooking that male soldiers were exempted from.

“North Korea is a traditional male-dominated society and traditional gender roles remain,” says Juliette Morillot, author of North Korea in 100 questions, published in French. “Women are still seen ttukong unjeongsu, which literally translates as ‘cooking pot lid drivers’, and means that they should ‘stay in the kitchen where they belong’.”

The hard training and dwindling food rations took their toll on the bodies of Lee So Yeon and her fellow recruits.

“After six months to a year of service, we wouldn’t menstruate any more because of malnutrition and the stressful environment,” she says.

So Yeon says that the army failed to make provision for menstruation, during her time in the military, and that she and other female colleagues often had no choice but to reuse sanitary pads.

“Women to this day still use the traditional white cotton pads,” says Juliette Morillot. “They have to be washed every night when out of men’s sight, so women get up early and wash them.”

And having just returned from a field visit where she spoke to several female soldiers, Morillot confirms that they often do miss their periods.

“One of the girls I spoke with, who was 20, told me she trained so much that she had skipped her periods for two years,” she says.

Though Lee So Yeon joined the army voluntarily, in 2015 it was announced that all women in North Korea must do seven years’ military service from the age of 18.

At the same time North Korea’s government took the unusual step of saying it would distribute a premium female sanitary brand called Daedong in most female units.

Despite this, female soldiers stationed in the countryside don’t always have access to private toilets, with some telling Morillot they often have to relieve themselves in front of men, making them feel especially vulnerable.

Sexual harassment, say both Baek and Morillot, is rife.

Morillot says that when she broached the subject of rape in the army with serving female soldiers, “most women said it happens to others”. None said they had experienced it personally.

Lee So Yeon also says that she was not raped during her time in the army between 1992 and 2001, but that many of her comrades were.

“The company commander would stay in his room at the unit after hours and rape the female soldiers under his command. This would happen over and over without an end.”

North Korea’s military says that it takes sexual abuse seriously, with a jail sentence of up to seven years for men found guilty of rape.

“But most of the time nobody is willing to testify. So men often go unpunished,” says Juliette Morillot.

She adds that silence about sexual abuse in the army is rooted in the “patriarchal attitudes of North Korean society” – the same attitudes that ensure that women in the army do most of the chores.

Women from poor backgrounds recruited into construction brigades, and housed in informal small barracks or huts, are especially insecure, she says.

“Domestic violence is still widely accepted, and not reported, so it is the same in the army. But I should really stress the fact that you have the same kind of culture (of harassment) in the South Korean army.”

Lee So Yeon, who served as a sergeant in a signals unit close to the South Korean border, finally left the army at the age of 28. She was relieved to have the chance to spend more time with her family, but also felt she wasn’t equipped for life outside the military and struggled financially.

It was in 2008 that she decided to escape to South Korea.

At the first attempt she was caught at the border with China and sent to a prison camp for a year.

On her second attempt, shortly after leaving prison, she swam the Tumen river and crossed into China. There, at the border, she had a rendezvous with a broker, who arranged for her to move through China to South Korea.

Listen to BBC Outlook A Woman Inside North Korea’s Army