Putin claims to be the defender of Christians, Jews and Muslims in Syria. What about “the West”?

HRWF (07.12.2017) – Putin has recently and openly upgraded his support to the return of Christians, Jews and Muslims in Syria. He has also promised to participate in the reconstruction of the country. He has mentioned the work of a special task force including members of the Russian Orthodox Church and the Roman Catholic Church, who are compiling a catalogue of churches destroyed in Syria with a view to their restoration.

The question is “Will the US, the EU and the heads of its member states raise their voices to pledge they will participate in the reconstruction of the safe parts of the country, rebuild and restore churches, community buildings and schools so that Syrian refugees will want to back home or … will they leave Putin reaping the gratitude of the Syrian people ?”  The influence and the credibility of the EU in the region today and tomorrow is at stake in this matter.

Interfax-Religion/ Russia (05.12.2017) – http://bit.ly/2ACh8nh – Patriarch John X of Antioch and All the East has praised Russia’s efforts in Syria, which helped put an end to terrorism and extremism in that country.

“Over the past two years, with the Russian army’s help, terrorism has been destroyed, putting an end to extremism and killings,” he said at a meeting with Russian Foreign Minister Sergey Lavrov on Tuesday, recalling that the Syrian army has also managed to retake control over all of the territory earlier seized by ISIL (banned in Russia).

“We would like once again to express our gratefulness for Russia’s position, Russian involvement in the region’s problems, in particular I mean the situation in Syria, and I would also like to thank you for all the assistance that Russia is providing and continues to provide,” John X said.

Now Syria is in the middle of the process of finding a peaceful political settlement, in which Russia also is involved, he said.

“I mean the efforts to assist with the negotiating processes in Astana, in Geneva, as well as the event for which preparations are under way, the national dialogue congress in Sochi in the very near future. We very much appreciate this,” John X said.

Terrorists destroyed over 120 churches in Syria — Patriarch of Antioch

TASS (05.12.2017) – http://tass.com/society/979136 – More than 120 churches were destroyed in Syria during military activities, Patriarch of Antioch John X told reporters in Moscow on Tuesday.

“Terrorists destroyed more than 120 churches… Nevertheless, we now have hope that the destroyed schools, hospitals, churches, monasteries, mosques and other buildings will be restored,” the Patriarch said.

“It was very important to eliminate terrorism, which poses a threat not only to Syria but also to the entire world. Today, almost all of the Syrian territory has been liberated, including areas where Christians lived,” John X added.

TASS (05.12.2017) – http://tass.com/society/979113 – The patriarch noted that the Russian Church had organized the delivery of humanitarian aid to students in Maaloula, Latakia and other cities.

The Russian Orthodox Church will continue to provide assistance to Syria, with fundraising campaigns being organized in churches, Patriarch Kirill of Moscow and All Russia said at a meeting with Patriarch John X of Antioch on Tuesday.

“Now that practically the entire Syrian territory has been freed from terrorists, including the areas with the Christian population, the issue of providing assistance to people who need to return to their homes, creating jobs and bringing their lives back to normal comes to the fore,” Patriarch Kirill noted.

“Funds are being raised in our churches, and people respond, bring their money,” he said. The patriarch noted that the Russian Orthodox Church cooperates closely with the government agencies and non-governmental organizations to deliver and distribute humanitarian aid.

“We plan to render assistance to the Al-Hosn patriarchal hospital in the Homs province. We got in touch with the Defense Ministry and have already received a reply that measures would be taken to ensure the joint support for the hospital within the next six months,” the patriarch said. He recalled that two tonnes of medical equipment had been delivered to Al-Hosn in May. The patriarch also noted that the Russian Church had organized the delivery of humanitarian aid to low-income families and Sunday school students in Maaloula, Latakia and other cities.

Interfax-Religion/ Russia (05.12.2017) – http://bit.ly/2AzbhBt – We will try to help not only Christian but also Muslim and Jewish refugees return to Syria, Russian President Vladimir Putin said.

“We will also be helping members of other denominations, including those professing Islam, who, as we know very well, have also suffered very seriously at the hands of thugs, terrorists, and radicals. We will also be helping Jews, and some Jewish organizations have already asked us to help restore Jewish shrines,” Putin said at a meeting with the heads of delegations of local Orthodox Churches.

Russia is maintaining “contact with members of the Jewish population in Syria, namely some Jewish organizations, from the United states, including from New York City,” he said.

The situation in Syria is gradually changing, and the Syrian armed forces, supported by Russian troops, have liberated virtually the entire territory of the country, including places historically inhabited predominantly by Christians, Putin said.

“I believe the return of the Christian population of Syria could play a very important role,” he said.

Putin mentioned the work of a special task force including members of the Russian Orthodox Church and the Roman Catholic Church, who are tasked with compiling a catalogue of churches destroyed in Syria with a view to their restoration.

TASS (04.12.2017) – http://tass.com/politics/978985 – Nearly all of Syria’s territory, including areas where Christians always lived, has been liberated from terrorists, Russian President Vladimir Putin said at a meeting with heads of local Orthodox churches.

“The situation in the country [Syria] is gradually changing, Syrian troops supported by the Russian military have liberated nearly all of the country’s territory, including areas where Christians have always lived,” he said.

Russia will help restore the shrines of Islam and Judaism that suffered damage during the struggle with terrorists in Syria, Putin also noted.

“We’ll give assistance to Christians and to representatives of other faiths, including Moslems who, as all of us know perfectly well, also suffered seriously at the hands of criminals, terrolrists and radicals,” Putin said at a meeting with heads of delegations of local [national] Eastern Orthodox Churches.

“We’ll render assistance to disciples of Judaism, too, and some Jewish organizations have already asked us to help restore Jewish shrines [in Syria],” he said.

Putin added Russia had established contacts with Syria’s Jewish community and the Jewish organizations, including the ones based in New York.

“We’ll work together over this problem, too,” he promised. 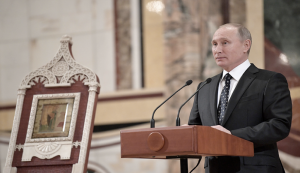 TASS (01.12.2017) –MOSCOW http://tass.com/society/978633 – Russian President Vladimir Putin has voiced the hope that the Russian Orthodox Church, which enjoys tangible international authority, will be able to promote the process of postwar reconstruction in Syria.

“I do hope that the Russian Orthodox Church, with reliance on its authority in the world, will be able to promote concerted action by the international community for the sake of Syria’s revival, for providing humanitarian assistance to its citizens and for restoring its ruined cultural and spiritual centers,” Putin said.

As he addressed the Bishops’ Council in Moscow on Friday, Putin asked: “What will happen if civilization wastes its spiritual and humanistic foundations and what risks humanity will be faced with?”

“Already now we can see the traditional values being eroded in many countries. This breeds degradation and mutual estrangement in society and de-personification of individuals. Indifference and loss of moral bearings bring about an upsurge of radicalism, xenophobia, and religious conflicts. Egoism ruins the person and turns into aggressive nationalism. Extremists and ideologists of terrorism and enemies of progress and the whole civilization fill the spiritual vacuum,” Putin said. He recalled the crimes committed by terrorists in Syria and “how they persecuted their coreligionists and Christians, ruined churches and killed people.”

Putin pointed out that the modern world “is changing rapidly and living through a very difficult period.”

“Our country is inseparable from the global processes and trends. We must seek leadership in the technological sphere, in the economy, and in knowledge in the broadest sense to give our people well-being and security,” he said.

He stressed that “ever more people set their eyes on Russia as a benchmark of unshakable traditional values and sound human existence.”

“I am certain that to provide a proper response to the challenges of the future we must stand for justice and truth, retain our identity and rely on our culture, history and the basis of moral values and move forward to absorb everything new and progressive while remaining Russia – forever,” Putin said.