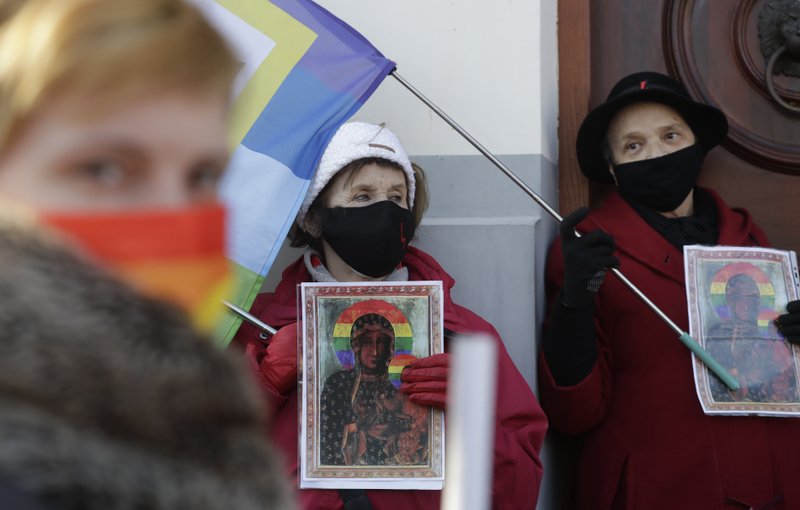 APNews (02.03.2021) – https://bit.ly/3cbpDJv –  A Polish court on Tuesday acquitted three activists who had been accused of desecration and offending religious feelings for producing and distributing images of a revered Roman Catholic icon altered to include the LGBT rainbow.

The posters, which they distributed in the city of Plock in 2019, used rainbows as halos in an image of the Virgin Mary and the baby Jesus. Their aim was to protest what they considered the hostility of Poland’s influential Catholic Church toward LGBT people.

The court in the city of Plock did not see evidence of a crime and found that the activists were not motivated by a desire to offend anyone’s religious feelings, but rather wanted to defend those facing discrimination, according to Polish media.

The conservative group that brought the case, the Life and Family Foundation, said it planned to appeal.

“Defending the honor of the Mother of God is the responsibility of each of us, and the guilt of the accused is indisputable,” the group’s founder, Kaja Godek, said on Facebook. “The courts of the Republic of Poland should protect (Catholics) from violence, including by LGBT activists.”

The case was seen in Poland as a freedom of speech test under a deeply conservative government that has been pushing back against secularization and liberal views. Abortion has been another flashpoint in the country after the recent introduction of a near-total ban on it.

One defendant, Elzbieta Podlesna, said when the trial opened in January that the 2019 action in Plock was spurred by an installation at the city’s St. Dominic’s Church that associated LGBT people with crime and sins.

She and the other two activists — Anna Prus and Joanna Gzyra-Iskandar — faced up to two years of prison if found guilty.

An LGBT rights group, Love Does Not Exclude, welcomed the ruling as a “breakthrough.”

“This is a triumph for the LGBT+ resistance movement in the most homophobic country of the European Union,” it said.

The image involved an alteration of Poland’s most-revered icon, the Mother of God of Czestochowa, popularly known as the Black Madonna of Czestochowa. The original has been housed at the Jasna Gora monastery in Czestochowa — Poland’s holiest Catholic site — since the 14th century.

Podlesna told the Onet news portal that the desecration provision in the penal code “leaves a door open to use it against people who think a bit differently.

“I still wonder how the rainbow — a symbol of diversity and tolerance — offends these feelings. I cannot understand it, especially since I am a believer,” Podlesna told Onet.

Podlesna was arrested in an early morning police raid on her apartment in 2019, held for several hours and questioned over the posters. A court later said the detention was unnecessary and ordered damages of about $2,000 awarded to her.

Because of all the attention the altered icon has received, it is now a very recognized image in Poland, one sometimes seen at street protests.