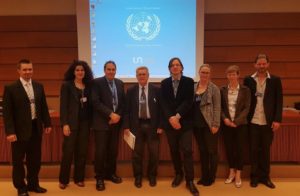 HRWF (09.05.2017) – On the margin of the Universal Periodic Review of the Philippines at the United Nations in Geneva, three human rights NGOs – Human Rights Without Frontiers (Brussels), FOREF-Europe (Vienna) and CAP (France) – organized a side event on 08 May 2017 about the situation of two Czech yoga teachers – Jaroslav Dobes and Barbora Plaskova – who have been detained for two years in the Immigration Detention Center of Bagong Diwa in Manila.

The facts in brief

On 7 October 2014, Jaroslav Dobes and Barbora Plaskova were sentenced by the court of first instance in Brno (Czech Republic) to 10 and 9 ½ years in prison for rapes that were allegedly committed in their country of origin more than ten years earlier.

Barbora Plaskova, the mother of a three-year old son, was arrested on 14 April 2015 and Jaroslav Dobes, the father of a five-year old child, on 15 May 2015. Both were deprived of their passport and were hereby left undocumented.

However, on 21 May 2015 (one week after Dobes’ arrest), the High Court of Olomouc ruled on appeal that the judgment of the Court in Brno was “annulled and revoked” and that the case was to be returned “to the court of first instance to make a new decision.”

Two years later, a new trail has yet to be initiated and there is no sign that there will be another one in the near future.

Despite their status of presumption of innocence, the Czech authorities have not given up the idea of deporting them and persistently urge the Filipino authorities to keep them in detention.

Filipino and Czech representatives attended the event at the UN in Geneva that was organized by the French NGO “CAP/ Liberté de conscience”(*). Ms Gwendolyn Pimentel-Gana, Commissioner on Human Rights in the Philippines, spoke with followers of the two yoga teachers, including the sister of Barbora Plaskova, who made a very moving testimony, saying among other things:

Barbora Plášková is my biological sister. She is the most self-sacrificing person I know and I’m not speaking just for myself.

When Barbora was arrested, nobody cared about what would happen to her little son, and no one took into consideration who would take care of him. Only after a year and a half at the second visit by the Czech Embassy to the detention, she was asked about her son. Even then no support was offered to her. She is still separated from her son. I, as a psychologist and a sister, have to say that it makes me absolutely crazy to imagine the misery of the two. The personality of an individual is mostly formed in the first years of life, and they have been robbed of two long years together. The son will now be three. My sister could not celebrate any of his birthdays with him. He is passed from hand to hand and badly misses his mom – the key person of his life. You can imagine how they both must feel. His first words on the phone last week, when he started making sentences were: ‘mommy, come’.

Barbora has suffered from several diseases in detention, such as inflammation of the dental nerve, stomach ulcers, gall bladder colic, female problems – inflammation of the uterus after the caesarean section, countless flus and tonsillitis. There is no medical aid in the detention, everything is treated by salt and water.

Our parents in Europe are totally devastated by the situation of their daughter and their grandson.

We need the help of the Filippino authorities because only they have the power to release my sister.

Ms Gwendolyn Pimentel-Gana, Commissioner on Human Rights in the Philippines, was aware that this Catch 22 situation was inhumane and that therefore the rights of the respective children of Barbora Plaskova and Jaroslav Dobes were gravely violated. She firmly promised to make maximal efforts to solve this problem. 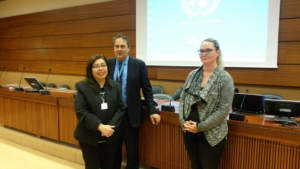 In his presentation, HRWF director, Willy Fautré, made concrete and realistic proposals that could meet some legitimate concerns of the Filippino and Czech authorities while serving justice and humanity, he recommended

(*) The moderator was Thierry Delval, executive director of CAP.