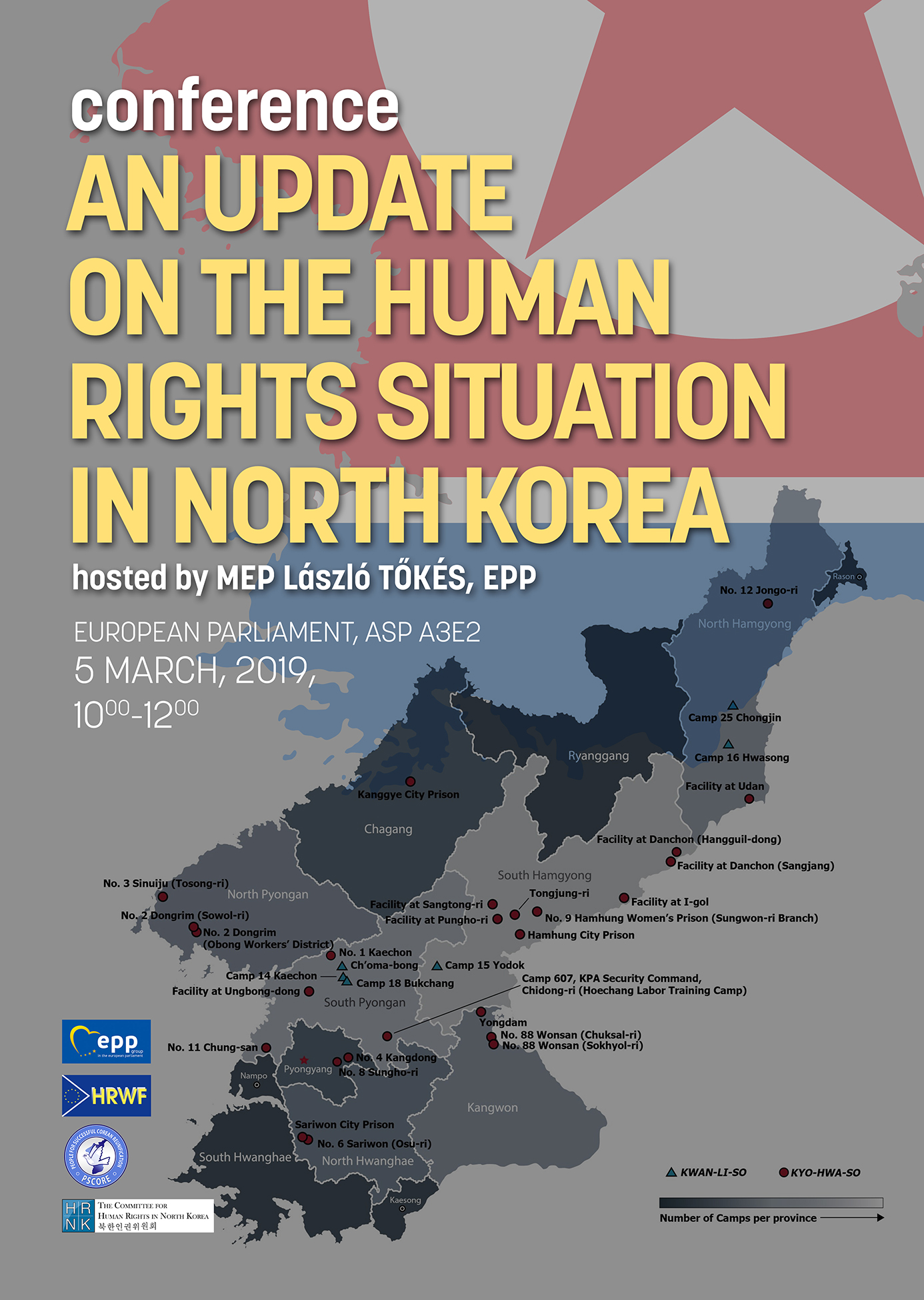 Conference: An update on the human rights situation in North Korea

On March 5th 2019, HRWF participated in a conference on the human rights situation in North Korea, hosted by MEP László Tőkés in the European Parliament. The panel consisted of: 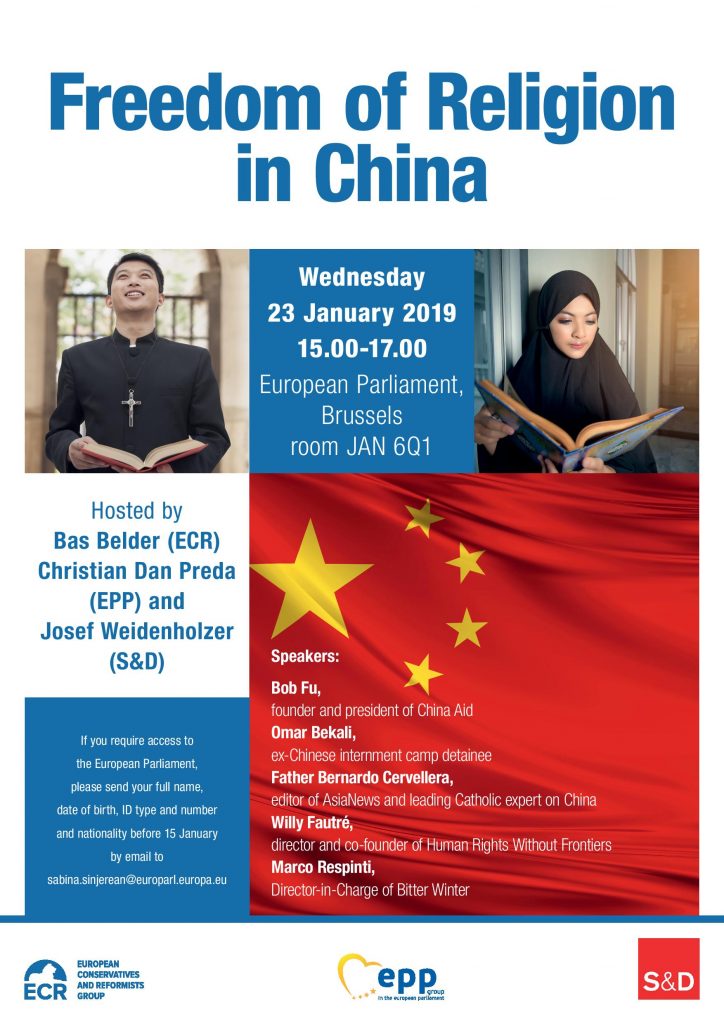 Conference on freedom of religion in China

On January 23rd 2019 HRWF participated in a conference on freedom of religion in China at the European Parliament, hosted by MEPs Bas Belder (ECR), Christian Dan Preda (EPP) and Josef Weidenholzer (S&D). The panel consisted of: 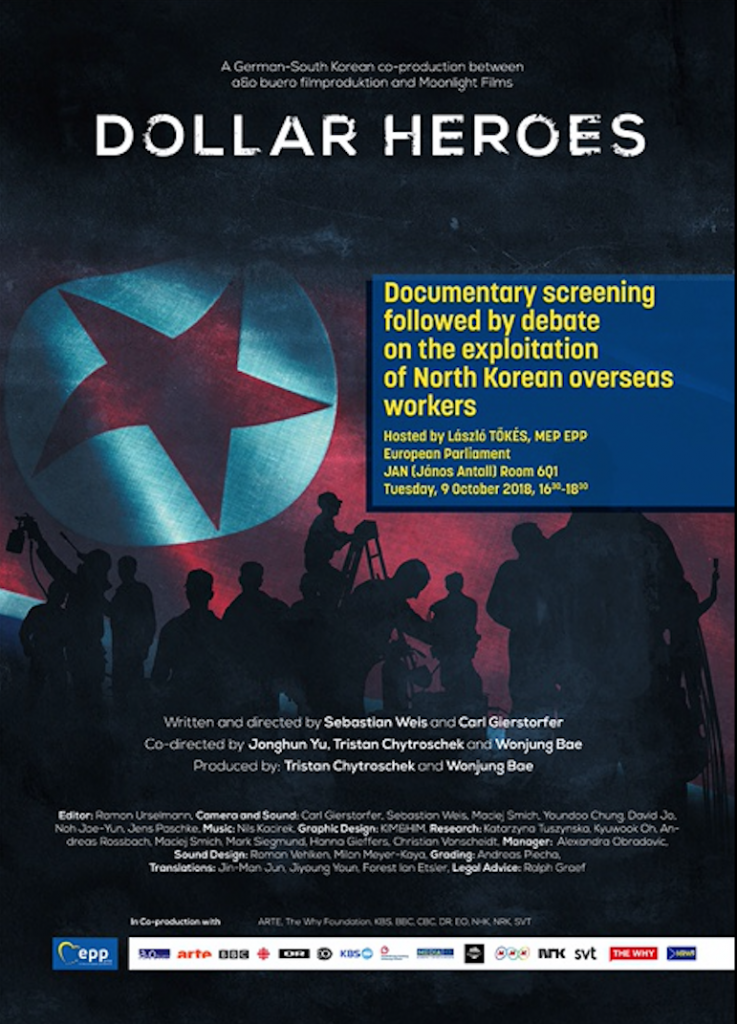 HRWF (09.10.2018) – In October MEP Laszlo Tökes and Human Rights Without Frontiers organized the screening of a film dealing with the exploitation of North Korean workers in Poland despite the UN and EU sanctions forbidding the hiring of workforce from North Korea. With the complicity of private companies and Polish state agencies, North Korean workers continue to work in Poland and to be exploited by Pyongyang, left only with an income of less than USD 150 per month.

On 19 September last, Human Rights Without Frontiers made a public statement at the Human Dimension Implementation Meeting (HDIM) of the OSCE/ODIHR in Warsaw asking the Polish delegation to the OSCE “How many North Korean Workers are currently working in Poland, and how many work visas have been issued since the last HDIM?” (1) Continue reading…

As a continuation on the subject, HRWF made an episode about the exploitation of North Korean overseas workers in Poland, in cooperation with the EU Reporter. Click here to read more and watch the episode.

EU Today (18.07.2018) – https://bit.ly/2uCzliW – On 20 June, Human Rights Without Frontiers (HRWF) held a reception in Brussels to celebrate its 30 years of existence. Dozens of partners, collaborators, former staff, and volunteers who had contributed to its growth over the last three decades were in attendance, writes Willy Fautré, founder and executive director of Human Rights Without Frontiers. Continue Reading…

View photos from the event here! 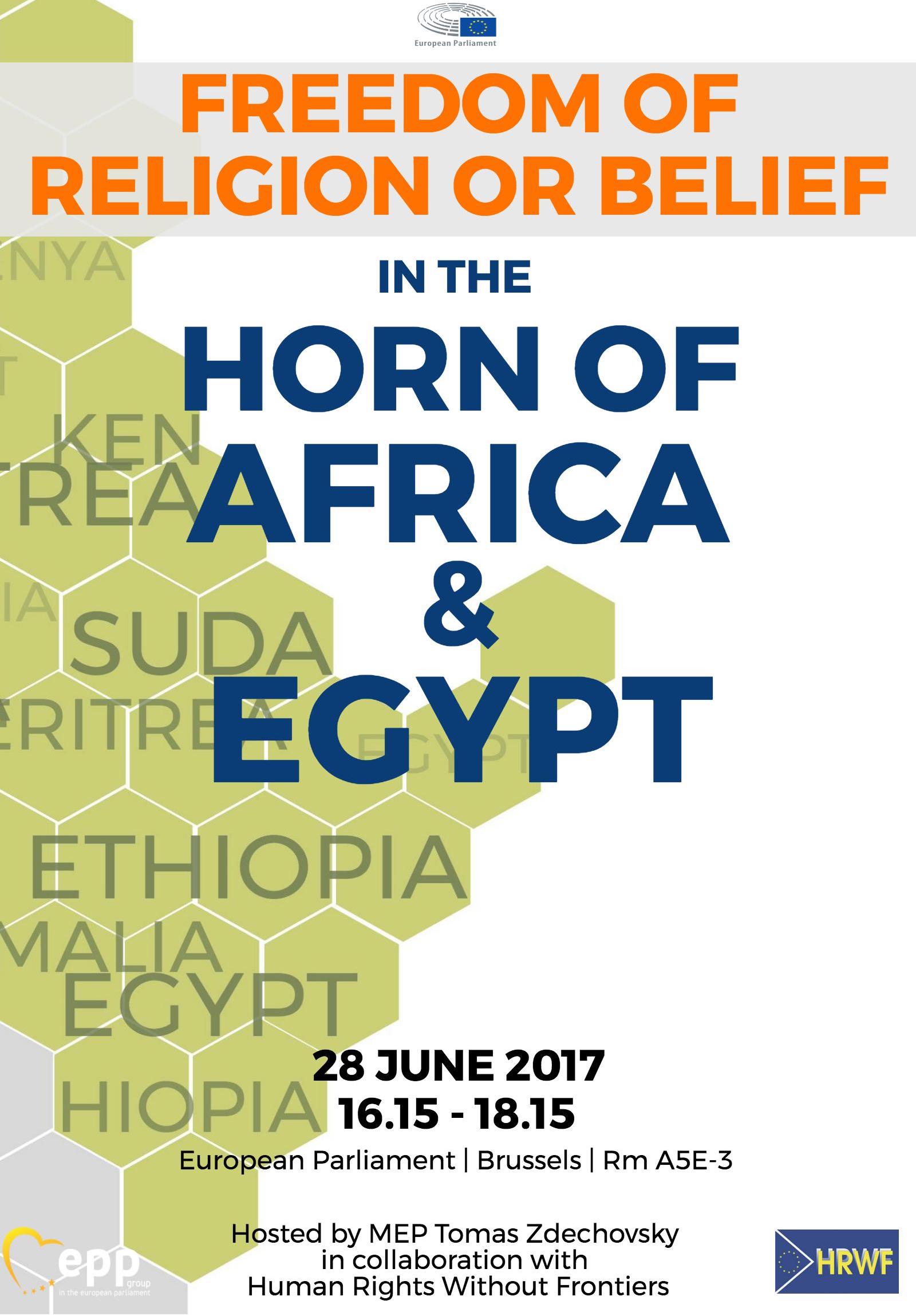 HRWF (30.06.2017) – Violations of Freedom of Religion or Belief in the Horn of Africa and Egypt are widespread, and vary in their nature depending on the country’s government, levels of democracy, security, and social environments, as a conference at the European Parliament has recently highlighted. Freedom of Religion or Belief greatly intersects with other rights and policy issues in that part of Africa and the EU must understand the root causes of tensions and violence, and be vigilant in examining law vs. implementation and practice to properly develop its external policies in
this region.

On 28 June 2017, MEP Tomas Zdechovsky, in collaboration with HRWF, hosted an event in the European Parliament in Brussels to address Freedom of Religion or Belief in the Horn of Africa and Egypt and these subsequent factors. With over fifty participants present, the panel consisted of:

Human Rights Without Frontiers hosted an event titled “EU’s Soft Power in the European Neighbourhood: Human Rights in Morocco” with MEPs Gilles Pargneaux and Ilhan Kyuchyuk on 26 June 2018 at the European Parliament.

The panelists discussed topics related to the freedom of association and assembly, children’s rights, women’s rights, and domestic violence. 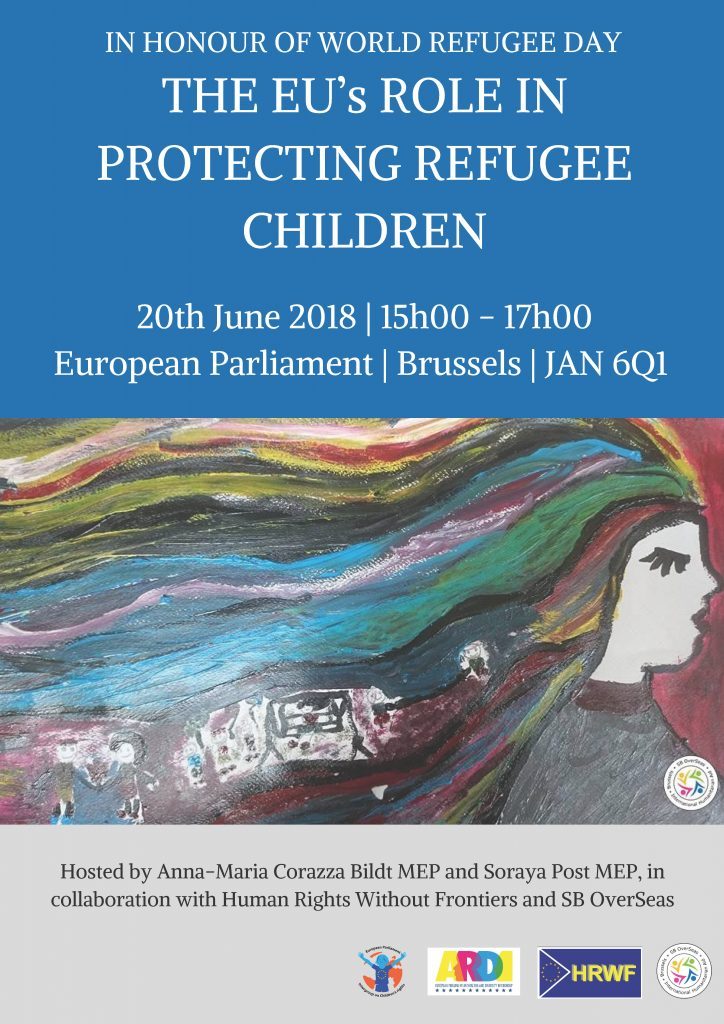 To commemorate World Refugee Day on 20 June 2018, Human Rights Without Frontiers (HRWF) and Soutien Belge (SB) OverSeas hosted a conference in the European Parliament with the support of the Intergroup on Children’s Rights and the Anti-Racism and Diversity Intergroup (ARDI).

Panel I: Child Marriage and the risks associated with this practice

– Elisa Van Ruiten, Human Rights Without Frontiers International, will provide an overview of child marriage and the protection afforded to children in international law following up with identifying the gaps between policy and implementation with some recommendations for change.

– Louma Albik, SB OverSeas, will discuss the increasingly prevalent practise of child marriage in refugee camps in Lebanon and the work done by SB OverSeas to combat this practice.

– Amy Wilson, US Mission to the European Union, will provide an overview of their Safe from the Start program and discuss the actions taken. 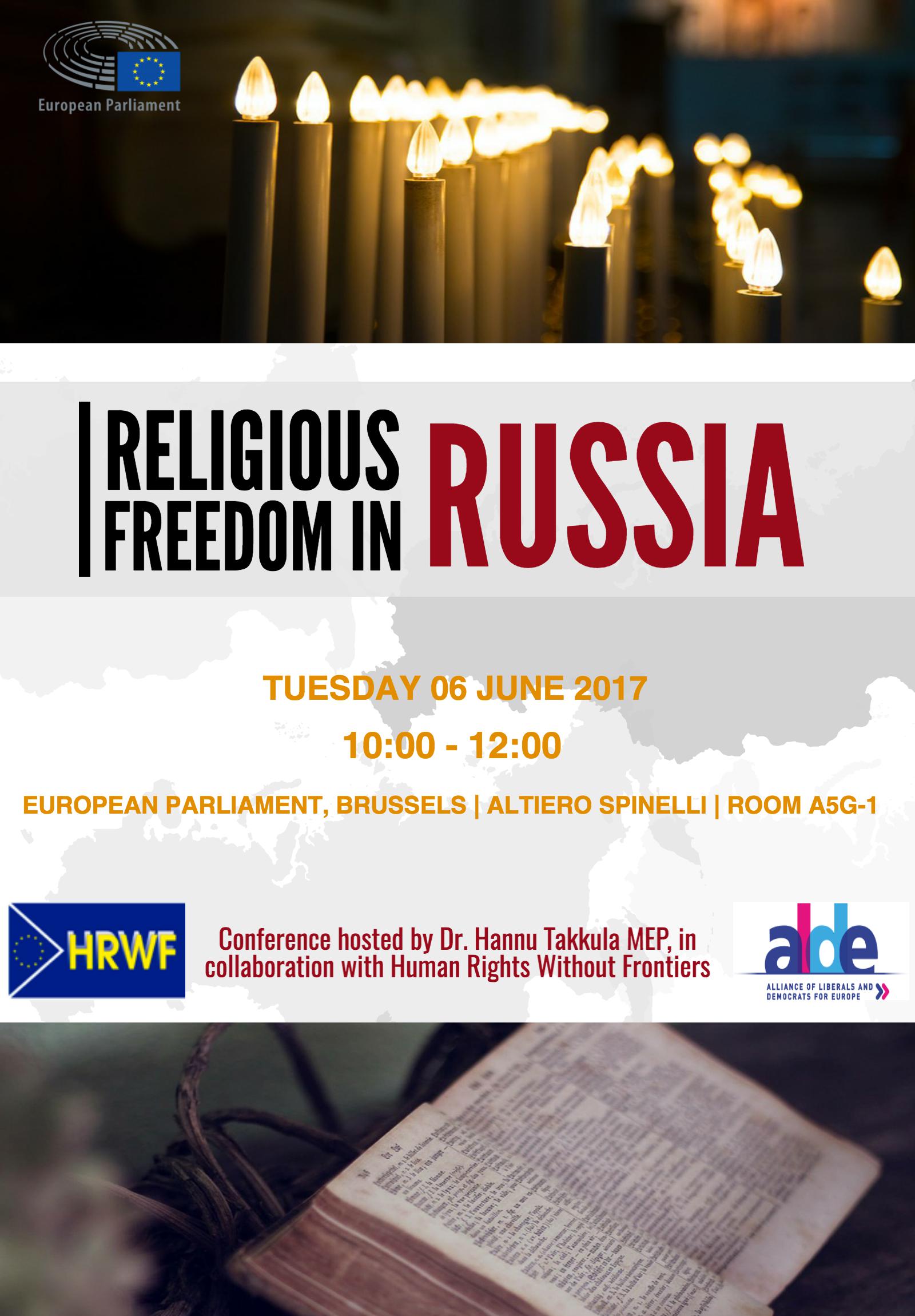 Religious freedom in Russia: A conference at the European Parliament stresses that Russia is a country of particular concern

HRWF (07.06.2017) – “Religious diversity is shrinking in Russia because of Putin’s policy of eradication of ‘foreign’ religious minorities,” concluded Human Rights Without Frontiers Int’l (HRWF) at the end of a conference about religious freedom in Russia held yesterday at the European Parliament and hosted by Finnish ALDE MEP Hannu Takkula.

“Spiritual security” philosophy as part of the national security policy

Russian NGOs and Russia-based NGOs that receive funding from the EU, the United States, and American or European foundations are infamously being labelled ‘foreign agents’ by Moscow. It is much lesser known that non-Orthodox religious minorities of ‘foreign’ origin are also having their international headquarters outside of Russia labelled as ‘foreign agents’.

This ‘foreign agent’ stigmatization revives the old Soviet accusation of espionage that still finds some echo in the minds of the older Russian generation. The manipulation of this socio-psychological reflex is part of the “spiritual security” ideology that underpins the various forms of increasing persecutions of non-Orthodox religious groups across the country. 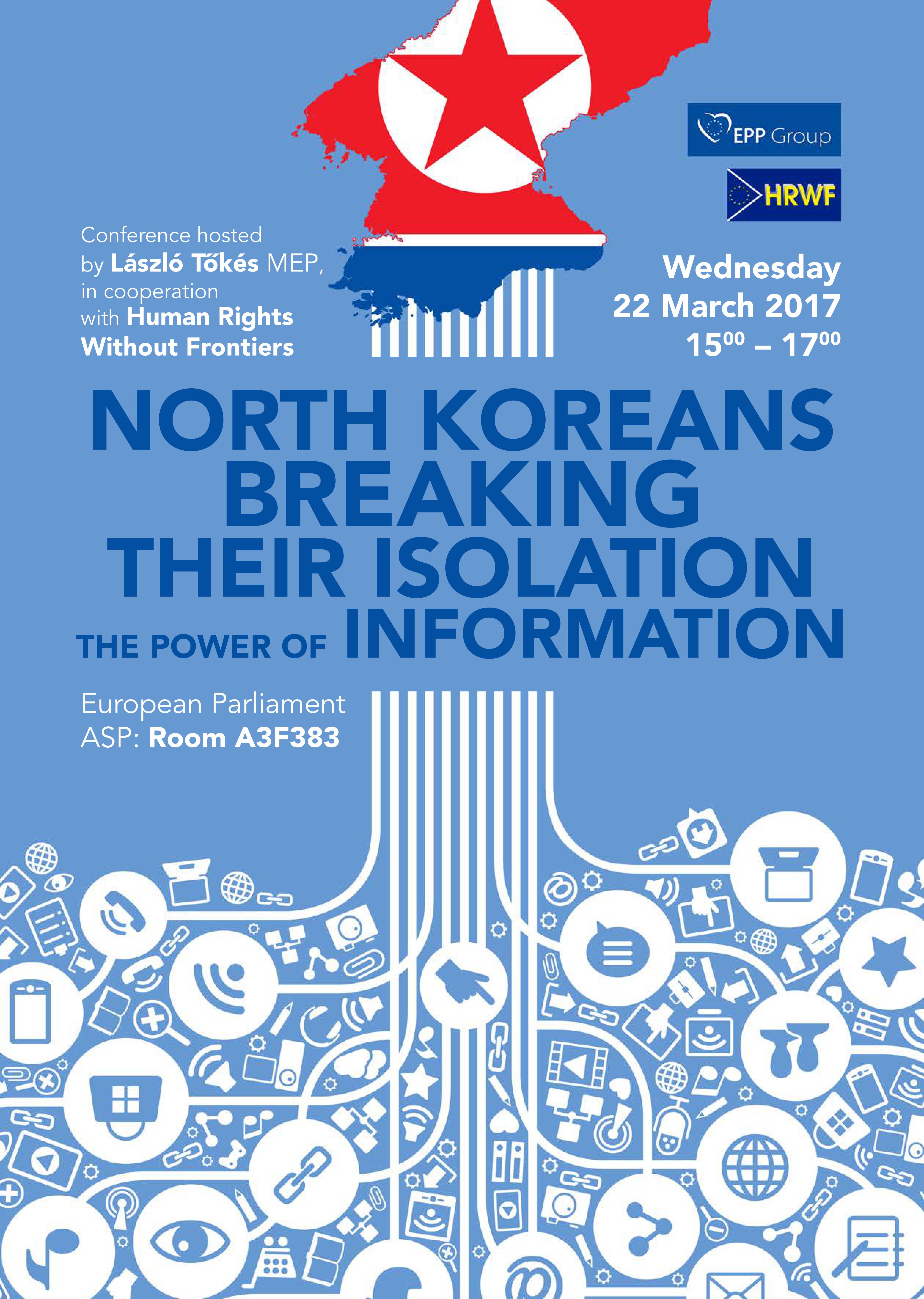 North Koreans Breaking Their Isolation: The Power of Information 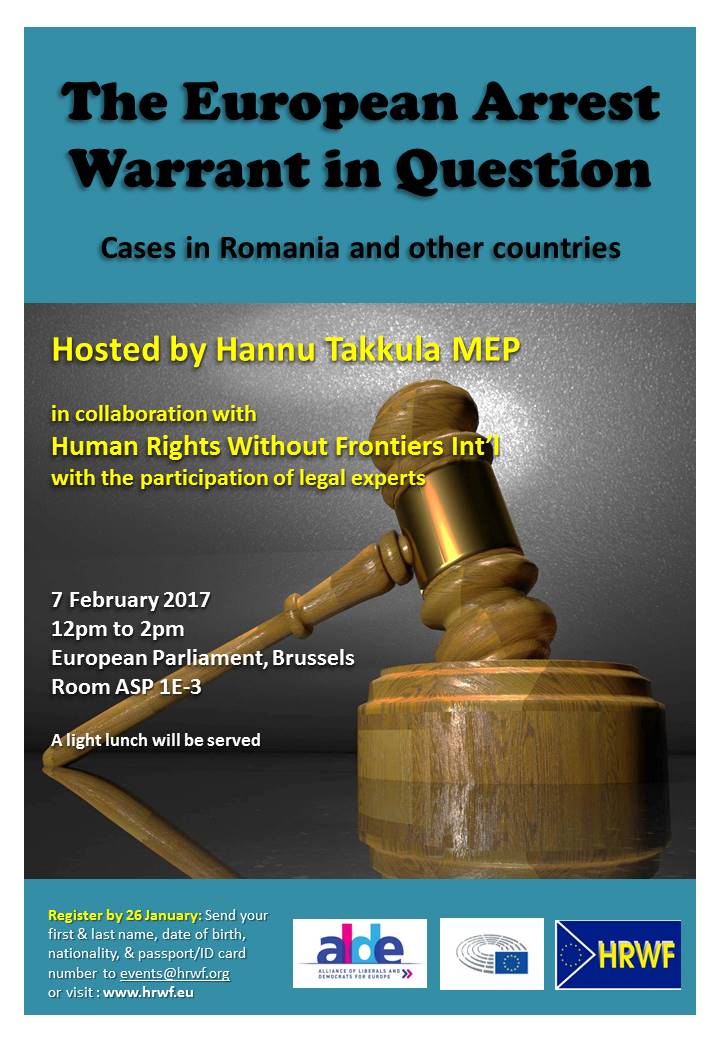 HRWF (08.02.2017) – “The European Commission should urgently consider a reform of the European Arrest Warrant (EAW) as for years its implementation has been tarnished by numerous flaws,” a number of experts said during an event at the European Parliament hosted yesterday by MEP Hannu Takkula (Watch the Openingspeech here) with the collaboration of Human Rights Without Frontiers.

Throughout the session, the speakers highlighted the precarious and important future of the EAW as the EU transforms in the coming years. Across the board, the experts paid particular attention towards the pivotal role of human rights in regards to the success of this international tool of justice.

On 29 June 2016, HRWF presented its’ World Annual Report on Freedom of Religion or Belief in the House of Lords, hosted by Lord Alton of Liverpool

On 10 May 2016, HRWF presented its’ World Annual Report on Freedom of Religion or Belief at the European Parliament in Strasbourg

In June 2015, HRWF hosted an event “In Prison for their Religion or Beliefs” in the United Kingdom House of Lords with the UK All Party Parliamentary Group on Freedom of Religion or Belief. At the event HRWF presented its 2014 annual reports on freedom of religion or belief. Interventions were made by Baroness Berridge, Lord Alton, Dr Nazila Ghanea and HRWF staff members. 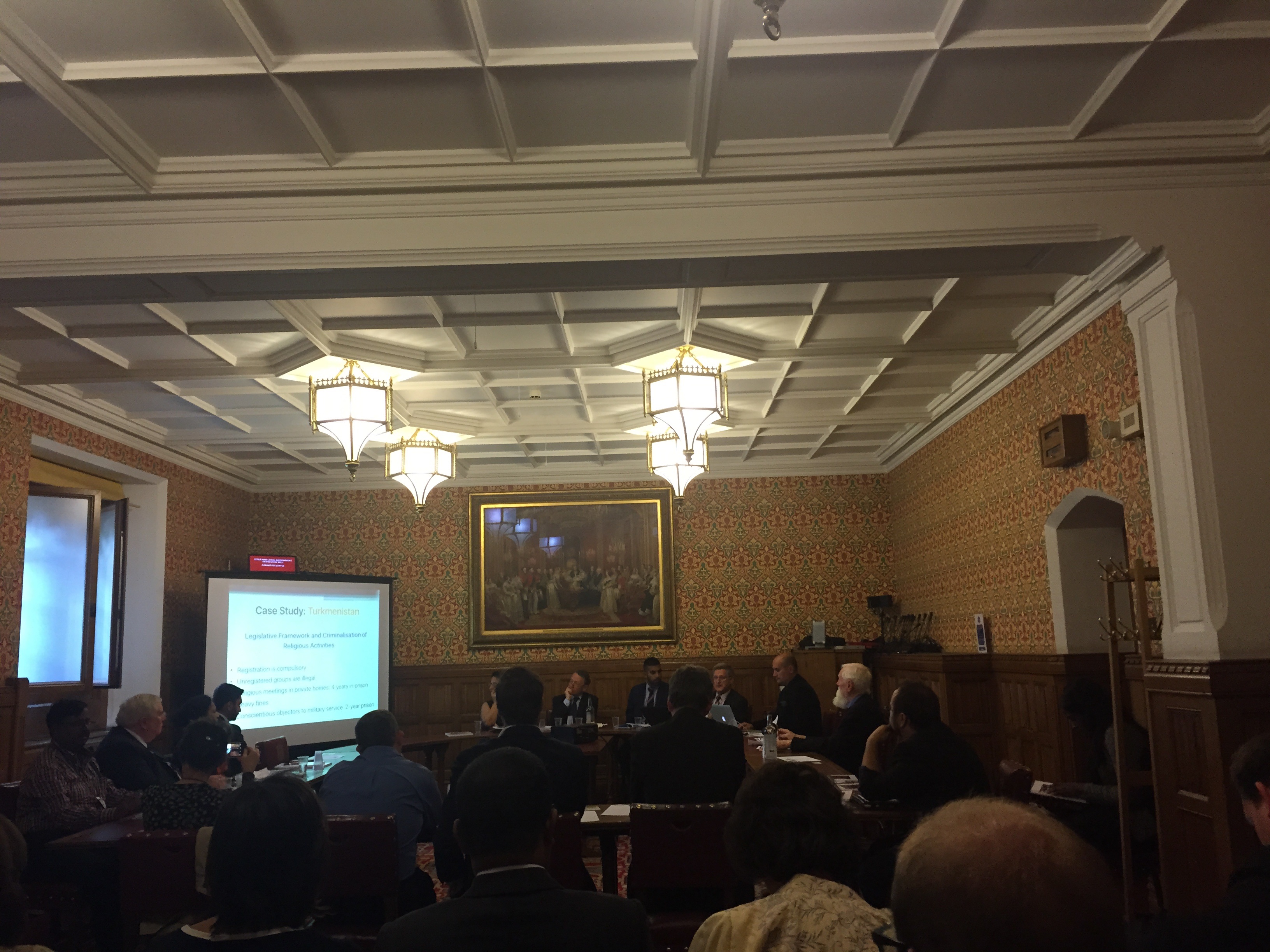 In May 2015, HRWF hosted an event “In Prison for their Religion or Beliefs” in the European Parliament. At the event HRWF presented its 2014 annual reports on freedom of religion or belief. Interventions were made by Mr Tokes MEP, HRWF staff members and a representative of the European External Action Service (EEAS).

In November 2014, HRWF hosted an event in the European Parliament on “Ethnic Minorities in Azerbaijan”. At the event HRWF presented a report based on a fact-finding mission in Azerbaijan. Interventions by representatives of various ethnic groups in Azerbaijan were made at the event.

In October 2014, HRWF hosted a side event at the OSCE ODIHR on “Ethnic Minorities in Azerbaijan”. At the event HRWF presented a report based on a fact-finding mission in Azerbaijan. Interventions by representatives of various ethnic groups in Azerbaijan were made at the event.

In April 2014, HRWF organised a side workshop “LGBT people, the Religions and Human Rights in Europe” at the EU Fundamental Rights Agency (FRA) annual meeting in Vienna.

In November 2013, HRWF hosted an event in the European Parliament on “Religious Minorities in Azerbaijan”. At the event HRWF presented a report based on a fact-finding mission in Azerbaijan. Interventions by representatives of various religious groups in Azerbaijan were made at the event.

In November 2013, HRWF co-organised an event with the European Parliament LGBT Intergroup on “Sexual Orientation, Gender Identity and Religion: A new dialogue”. At the event HRWF presented a report “LGBT people, the Religions and Human Rights in Europe”.

In May 2013, HRWF organised an event on “Human Rights in Mali” which focused on the situation in Northern Mali after the internal conflict in the country in late 2012, early 2013.

In May 2013, HRWF co-organised an event on “Human Rights in North Korea”. The keynote speech was given by Shin Dong-Hyuk, who managed to escape the notorious Camp 14.

For more information on HRWF events, contact us at: events@hrwf.net.