OSCE: The need of a shared understanding of freedom in the OSCE Region

Freedom of Religion and Belief (FoRB) as a universal, fundamental Right must not be compromised by the pretext of “spiritual” or “cultural” security
Commentary by Dominic Zoehrer, HRWF consultant

HRWF/FOREF (23.06.2017) – The Austrian OSCE Chairmanship and the OSCE Office for Democratic Institutions and Human Rights hosted a Supplementary Human Dimension Meeting (SHDM) on the 22nd and 23rd of June in the spacious halls of the Hofburg, the former imperial palace in the inner city of Vienna. This SHDM’s theme was Freedom of Religion or Belief for All and was aimed at discussing the opportunities and challenges in confronting intolerance and discrimination against Jews, Christians, Muslims and members of other faith communities. As the contributions to the SHDM have shown, notions of what FoRB means and how basic freedoms form a normative basis for government policies are becoming increasingly blurred in the OSCE region. Restrictive governments tend to prioritize concepts of security over the individual and collective right to religious freedom with impunity. The lack of a shared understanding of freedom in the region makes it even easier for such governments to compromise on fundamental human rights.

In his introductory remarks to one session of the meeting, Ambassador Jean-Christophe Peaucelle, the Advisor for Religious Affairs at the Ministry of Foreign Affairs of France, stated: “France is not hostile to religion. France is committed to non-segmented freedom of religion and belief, and ensures the protection of universal and indivisible human rights.” He underlined that the French version of secularism does not view religion negatively, but takes a neutral stance on religion.

Considering Ambassador Peaucelle’s declaration of religious freedom principles, it is somewhat puzzling that FECRIS, the most aggressive network of anti-cult organizations in Europe, in fact has its origins in French policies on minority religions. The network was created in 1994 at the initiative of the French organization UNADFI (National Union of Associations of Defense of Families and Individuals), a group that was predominantly financed by the French State. FECRIS, an acronym for European Federation of Centers of Research and Information on Sectarianism, has likewise been financed almost entirely by public funds. Between 2003 and 2016 an annual average amount of about 35.000 EUR (in total: 485.200 EUR), or more than 90% of the total funding of FECRIS, was provided by the French Prime Minister in order to export the French interpretation of secularism to other European countries (cf. below diagram). 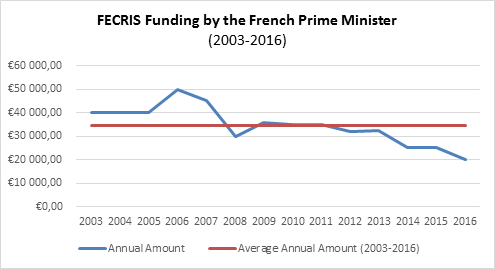 The French treatment of minority religions over the past two decades has given international legitimacy to Russian compromises on religious freedom. For years, the vice-president of FECRIS, Alexander L. Dvorkin, has been the key promoter of the Russian Orthodox concept of “Spiritual Security”. This ideological view holds that Russia’s historical traditions and cultural heritage must be protected inter alia by countering “the adverse impact of foreign religious organizations and missionaries”, as stated in the 2000 National Security Concept of the Putin Administration. Since the introduction of the law on Freedom of Conscience and on Religious Associations in 1997, the Russian federal government has used spiritual security as a pretext to combat “religious extremism”. This law has in effect allowed for wide-spread hate speech and physical assaults against non-Orthodox religious groups – e.g. the Jesuits, the Salvation Army, the Baha’i, Hare Krishna, Falun Gong, Pentecostals and Mormons – and eventually culminating in this year’s ban on the Jehova’s Witnesses as an “extremist” group. About 170,000 Russian citizens are currently affected by this law. (See also the contribution of HRWF and FOREF to the SHDM here.)

What gives reason for concern is that Ambassador Peaucelle’s remarks passed uncontested in the presence of about 70 civil society representatives. Does the silence on France’s contribution to the systematic persecution of minority religions in the OSCE region indicate ignorance among international observers, or, even worse, indifference?

Another presentation at the SHDM should have caused raised eyebrows, but was again left unchallenged. Dr. Farid Hafez, a researcher at the Department of Political Science at the University of Salzburg, explained that Islamophobia is “a form of racism”, namely “anti-Muslim racism”. The notion of race is understood to be a social construction that reflects political power structures, according to Hafez. However, he did not discuss why the notion of “race” should be preferred to the notion of “religion” in the context of religious freedom. This attempt to introduce a special formula for describing discrimination against Muslims, which defies objective categorization and diminishes respect for the universality of fundamental human rights, is alarming.

Besides the freedom to adhere to a certain belief, the international standard of religious freedom also encompasses the right to freely criticize religion or to fear a religion within the framework of fundamental human rights. But when Islam is identified with “race”, the use of the term Islamophobia is a mechanism to immunize a religion against any form of criticism, thus undermining the fundamental principles of religious freedom and freedom of expression. The vagueness of Hafez’ notion of Islamophobia – which could range from fear of sharia to hate crimes or even physical assaults against Muslims – is thus expected to pose a significant challenge to objectively measuring and assessing concrete cases of FoRB violations against Islamic minorities in the OSCE region. Moreover, inner-Islamic violations of the right to religious freedom, e. g. blasphemy or apostasy laws, are not sufficiently covered by the term. A serious adoption of this elastic terminology could lead to the denunciation of sceptics or apostates who criticize a religion, or its political and military spin-offs, as perpetrators of hate crime and a threat to public security.

An important counterpoint was set by Prof. Brett Scharffs, Director of the International Center for Law and Religion. In a less ideological and more principle-based and fact-oriented presentation, Prof. Scharffs first analyzed patterns and trends of restrictions on religion by state actors in the OSCE region and then discussed the problem of the “securitization” of human rights.

“However,” Prof. Scharffs said, “regarding the discrimination of freedom rights, majority religions are not necessarily part of the problem, but often they are also part of the solution.” He explained that no country implementing a “very high” legal restriction on religion has a Catholic majority, and only in two countries with “high” legal restrictions, Catholics represented the majority. Furthermore, 8 out of 11 countries applying “very low” restrictions have a Catholic majority. Whereas social and legal restrictions tend to be high in OSCE States with significant Muslim or Orthodox Christian majorities, Scharffs pointed out that since 50 years, countries with Catholic majorities have a doctrinal basis for protecting religious freedom as a universal value: the Vatican’s declaration on religious freedom and human dignity from 1965, the Dignitatis Humanae. He drew the conclusion that the teachings and practices of dominant religions do have an important influence on the standards of government restrictions and FoRB policies.

In the second part of his presentation, Scharffs explored the tension between “securing fundamental rights” on the one hand and the “securitization of rights” on the other. Limitations of fundamental rights not only need to be justified, they also need to be confined to (1) public safety, (2) public order, health or morals, and (3) the rights and freedoms of others. Contrary to the limitation of rights in accordance with objective principles, the securitization of rights prioritizes the state’s interests over individual freedoms. “The pretextual misuse of national security has become a rationale for limiting freedom and restricting religious groups”, Scharffs explained. In this vein, Russia’s law on religious extremism exemplifies how measures in the name of security are used to persecute minorities. He said that seeing religious freedom through the prism of security “will distort and weaken freedom”, as balancing national security and individual freedoms is considered a zero-sum game. However, limitations of human rights always require a legitimate basis and should only be applied where objectively necessary. Scharffs concluded his remarks by applauding the OSCE’s role in constructively thinking about the relationship between freedom of thought, conscience, religion and belief, and security. He expressed his hopes that the OSCE will rise to the challenge of leadership in this area and resist the trend of securitization of freedom.

This snapshot of conflicting notions of human rights in the OSCE region reflects a questionable, ‘post-modern’ trend in which the protection of basic individual freedoms is diluted in the name of economic and social regulation, security and political correctness. Are fundamental human rights after all only social constructions that are subject to flexible interpretations by state actors, group interests and individuals?

In her book Soviet Dissent, Ludmilla Alexeyeva, a Russian historian and human rights activist, observed that having no access to philosophical or legal literature of the human rights tradition and only limited contact with human rights organizations in the West, the Soviet dissidents reinvented human rights for themselves. But still, as Aaron Rhodes pointed out in his analysis of the transformation of human rights concepts in the participating States of the OSCE since the Helsinki Final Act in 1975, the dissident movement’s interpretation of human rights was absolutely consistent with the classical liberal view of human rights as developed by enlightenment thinkers John Locke and Immanuel Kant. They regarded freedom not as “a means to other ends, but an end in itself.” Protecting the freedoms endowed by natural law was thus understood to be a moral duty. Another obvious feature of the dissident human rights movement was the “scientific, factual, dispassionate style” of its intellectual leaders, e. g. Andrey Sakharov, Ludmilla Alexeyeva, Yuri Orlov or Václav Havel. Reinforced by the Helsinki Accords, the behavior of state actors could be measured objectively against their own political commitments to human rights standards. And finally, the insistence on a clear distinction between human rights activity and political reform programs allowed for non-partisanship among dissident human rights defenders. Priority was not given to regime change or economic, social and cultural rights, but to the respect for basic individual freedoms.

This case of the Soviet dissident movement illustrates that the notion of fundamental freedoms is not only the invention of a particular cultural context. If the participating States of the OSCE wish to return to the original spirit of the Helsinki Final Act, they need to reflect and renew their commitment to protect the universality and non-partisanship of basic human rights as an end in itself, and apply objective standards for monitoring abuse beyond ideological bias.

The aim of the supplementary human dimension meeting was to enable constructive debate among OSCE institutions, participating states, the civil society, faith representatives and academic experts in order to find approaches for improving the implementation of OSCE commitments. However, without a shared understanding of freedom, the dilution of human rights concepts and the reduction of basic freedoms to shallow rhetoric might eventually lead to the loss of the OSCE as a platform for sincere, open and result-oriented dialogue. “For OSCE gatherings not to become an elitist discourse, we must not loose touch with the grassroots”, as one NGO representative put it at yesterday’s SHDM.  Only when basic freedoms are respected as inalienable rights and are defined as the cornerstone of the political commitments shared between Vancouver and Vladivostok, will the voices of civil society and religious representatives have a chance of being heard.

HRWF database of news and information on over 70 countries: https://hrwf.eu/newsletters/forb/