NORTH KOREA: Violations of human rights by North Korea highlighted in a conference in Paris 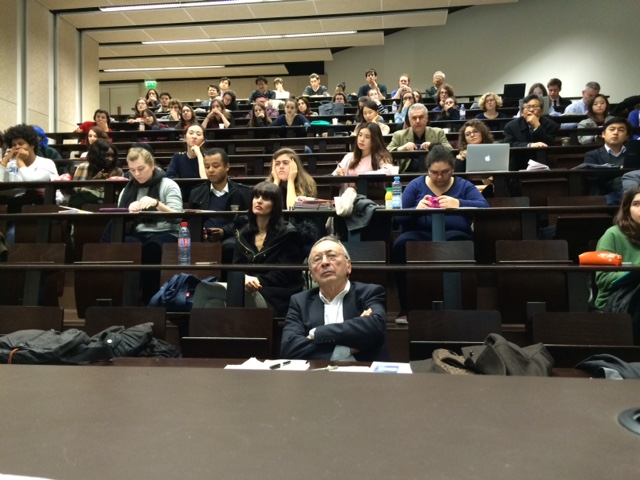 HRWF (28.11.2016) – Egregious violations of human rights in North Korea have been denounced by a wide range of European and South Korean experts at a well-attended conference organized on 24 November at the National Institute for Oriental Languages and Civilizations (INALCO) in Paris by Dr. Guibourg Delamotte, lecturer and associate professor of political science at INALCO’s Japanese Studies Department.

The event was introduced by Mr MO Chul-min, Ambassador Extraordinary and Plenipotentiary of the Republic of Korea in France. As of November 2016, the number of North Korean refugees living in South Korea was estimated at 30,000, he said. They escaped at the risk of losing their lives or freedom, but many more would leave their country if they were free to do it. Their main motivation was the systematic, brutal, and widespread violation of their human rights in their own country. The ambassador recalled that since 2005 twelve resolutions had been adopted by the United Nations, and in the last one dated 15 November, the North Korean authorities had been clearly identified as the main perpetrators of human rights violations.

The first session on “North Korea’s Lack of Respect for Human Rights” was chaired by Dr. Guibourg Delamotte.

The magnitude of this human tragedy was illustrated by statistics covering more than 65,000 cases collected by the Seoul-based Database Centre for North Korean Human Rights (NKDB) and presented by Ms Teodora Gyupchanova, a member of the NKDB’s International Communications Team and contributor to the annual White Paper on North Korean Human Rights. Their work confirms in figures the findings of the UN Commission of Inquiry and other reports.

Dr. HAN Dong-ho, a researcher at the Korean Institute for National Unification (KINU), focused on the conflicting perceptions of the situation in North Korea inside South Korea and announced the publication of a report on women and children in the DPRK.

The second session on “Regime Survival” was chaired by Dr. John Nilsson-Wright.

Willy Fautré, director of Human Rights Without Frontiers (HRWF) raised the issue of the exploitation of 50,000 North Korean overseas workers in the world, including in the EU (Poland, Czech Republic, Netherlands and Malta). In the last few years, the Czech Republic and the Netherlands stopped issuing working visas for North Korean workers after the problem became public and drew international attention. Fautré shared the latest encouraging news concerning his advocacy campaign in the media, through the OSCE and the European Parliament but regretted the persistent passivity of the Polish authorities and the lack of activity of the European Commission on this issue. “Despite NGOs reports, written questions and calls by several members of the European Parliament (such as Kati Piri, Anges Jongerius and Thomas Händel), EU Commissioner Marianne Thyssen has up to now failed to question the Polish authorities about their responsibility in this issue and activate the infringement procedure against Poland, where 550 North Korean laborers are working in inhumane conditions, earning only 120-140 USD per month,” he commented.

The worldwide exploitation of this workforce by Pyongyang is said to generate benefits in hard currencies amounting to 1.2 – 2.3 billion USD per year, a financial manna which is welcome to finance the nuclear program of North Korea.

Ms. Jihyun PARK, from the European Alliance for Human Rights in North Korea (EAHRNK) brought a personal moving and harrowing testimony about the living conditions of ordinary people in North Korea. Since she left her country many years ago, a heart-breaking decision, she has not had any news about her parents.

Each session was followed by a debate with two discussants:

Dr. Pierre Rigoulot, Director of the Institute for Social History in Paris

Dr. John Nilsson-Wright, from Cambridge University and visiting fellow at the Asia Centre

Dr. Antoine Bondaz, from the Asia Centre, author of “From Insecurity to Stability: China’s Korean Policy from 2009 to 2014”

They elaborated on the issues raised by the speakers: lack of political freedom and human rights, official and secret executions, forced repatriation of escapees from China and other countries, arrests, torture, imprisonment, forced labour in concentration camps, forced prostitution, poverty, social discrimination, etc.

Last but not least, they also addressed the political and geo-political implications of the nuclear program as well as the threat posed by the repeated launches of ballistic missiles in the region.