NORTH KOREA: Stranger than fiction: How forbidden book was smuggled out of N. Korea

Written by a dissident writer still living inside the country, “The Accusation; Forbidden Stories from Inside North Korea” is a collection of short stories about the lives of regular people, who live without freedom and under constant scrutiny.

Officially fiction, the book is considered to be a reflection of life under North Korean rule. The author is known simply as “Bandi”, Korean for firefly, a pen name he apparently chose himself.

The South Korean activist who helped smuggle it out, Do Hee-youn, tells CNN: “It doesn’t deal with political prison camps, or public executions, human rights issues. It shows normal life of North Korea citizens and it is very frightening. This book shows that they live like slaves.”

The book was first published in Korean in May 2014, and translated into French in 2015. It was published last month in the United States and United Kingdom and is now available in 19 languages.

Do said he first heard about the manuscript completely by chance.

“We heard about a North Korean defector,” Do told CNN, “A woman who had been arrested by Chinese border troops… We have been helping such cases in the past so we were helping her and we learned about Bandi and the manuscript.”

The woman told them Bandi was a relative and had asked her to smuggle the manuscript out of North Korea when she confided she was planning to defect. 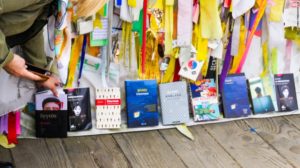 Copies of “The Accusation” translated into different languages are placed next to each other Thursday on the Bridge of Freedom at Imjingak in Paju.

But she was too scared she would get caught with it, Do said. A wise decision as it happens — she was caught on the Chinese side of the border. If she was carrying the manuscript she would likely have been sent back to imprisonment, or even execution in North Korea.

“It is very difficult to bring a document out of North Korea,” Do said. “We have tried in the past and failed but there were a few cases we succeeded.”

Smuggled out in propaganda

The hand-written manuscript was then smuggled out in between propaganda books on former leaders Kim Il Sung and Kim Jong Il.

“We found a way of getting the script out through Chinese tourists. We thought that disguising the book among these propaganda materials would make it easier to bring it outside so we decided to hide the copy.”

The luggage was x-rayed but not hand-searched at the border, Do says, a fact that surely saved the freedom, if not life, of the courier. Once the manuscript arrived in South Korea in 2013, Do worked to find a publisher. 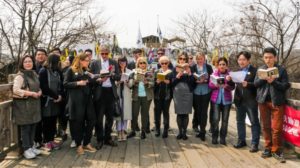 Publishers and literary agents read a passage from “The Accusation,” a collection of short stories by a North Korean writer who is still living in North Korea.

The text was written on 750 pages of coarse squared manuscript paper, the type only writers in North Korea could possess, Do says. Bandi was part of Korean Writers’ Alliance, a state-run organization that wrote literature for the regime.

Do says he is now retired and is safe but gives little else away, fearful the regime will discover his identity. Pyongyang does not look kindly on defectors who criticize the state, calling them “human scum.” This is the first known writer of a book, critical of North Korea, who is still inside the country. Do says his safety is paramount.

“Bandi considered this more valuable than his own life, the love for the citizens of North Korea. He sees himself, his family and all North Koreans living like slaves, with no future under the current regime,” he said.

Do says poems were also smuggled out at the same time that deal with the Kim Jong Il era and will be published later.

He has little doubt Bandi is still writing and at some point in the future will attempt to share with the world his views of life under the current leader Kim Jong Un.