How the information underground is transforming a closed society 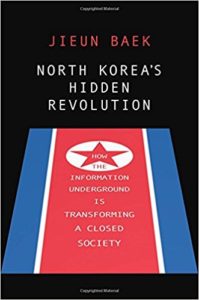 One of the least understood countries in the world, North Korea, has long been known for its repressive regime. Yet it is far from being an impenetrable black box. Media flow covertly into the country, and fault lines are appearing in the government’s sealed informational borders. Drawing on deeply personal interviews with North Korean defectors from all walks of life, ranging from military officers to diplomats, Jieun Baek tells the story of North Korea’s information underground – the network of citizens who take extraordinary risks by circulating illicit content such as foreign films, television shows, soap operas, books, and encyclopedias. By fostering an awareness of life outside North Korea and enhancing cultural knowledge, the material these citizens disseminate are affecting the social and political consciousness of a people, as well as their everyday lives.

“Our usual image of North Korea is of an isolated society cut off from the outside world and trapped in another time. But Jieun Baek shows that this is far from the case. Through detailed observation, exhaustive research, and extensive interviews with defectors, she reveals a society undergoing tremendous change and becoming connected to the world as never before. Despite the best efforts of the regime to control the information flow into and out of North Korea, the country is undergoing an ‘information revolution’ with far-reaching and unpredictable effects.” – CHARLES K. ARMSTRONG, Korean Foundation Professor of Korean Studies in the Social Sciences, Columbia University.

The author, JIEUN BAEK, is a PhD candidate in Public Policy at the University of Oxford. Previously, she was a research fellow at the Belfer Center for Science and International Affairs at Harvard University and worked at Google, where, among other roles, she served as Google Ideas’ North Korea expert. Visit her at http://www.JieunBaek.com.

Her book can be purchase on Amazon here: