It was on April 6 when the European External Action Service expanded sanctions against the North Korea. Sanctions were introduced on 22 December 2006 and included the prohibition on investments in the DPRK to new sectors, namely the conventional arms-related industry, metallurgy and metalworking, and aerospace.

The European Council had also agreed to prohibit the provision of certain services to persons or entities in North Korea, namely computer services, and services linked to mining and manufacturing in the chemical, mining and refining industry.

North Korean refugees step up for rights and freedom

The “Brussels Declaration” that was presented on April 25 in the Belgian capital, tops up eight priorities, focusing on human rights and basic freedoms that citizens are denied in North Korea.

Refugees ask for no excuse to the duty to respect all the article of the “Universal Declaration of Human Rights,” the “Chapter of the UN” and the “agreement of human rights”.

“North Korea must ensure the minimum right to maintain decent living with safety for the citizens,” complying with it as a UN member, according to the declaration, as North Koreans suffer from a lack of food supplies. What is more, proper treatment and welfare are not offered to citizens.

“North Korea is an anti-democratic state-controlled country, whose citizens are deprived of basic freedoms. The citizens have, therefore, been sorted by class and background origin.

“King Jong Un regime must take the responsibility on all forms of inhumane behaviours” reads the declaration.

The UN Commission of Inquiry for Human Rights in North Korea has demanded the approval for the investigation group’s verification visit, something that Kim Jong Un regime has refused.

“The assassination of Kim Jung Nam in Malaysia is not a case that can be dealt between North Korea and Malaysia under bilateral diplomacy,” the declaration adds, as the terrorist act used biochemical weapons, VX, forbidden by UN, in clear violation of international law.

The declaration calls for Kim Jong Un to abandon the nuclear programme he keeps developing as soon as possible and take responsibility and duty for the regional peace and stabilisation, as a member of international society, and step forward for sincere peace talks.

A North Korean missile exploded within seconds of its launch on the east coast on April 16, as confirmed by South Korean and US officials.

At the end of the event, the Brussels Declaration was announced. See below for the full declaration. 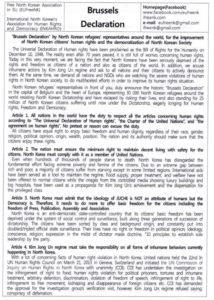 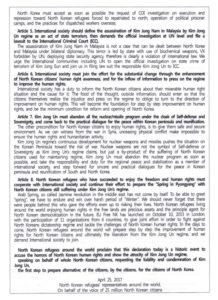