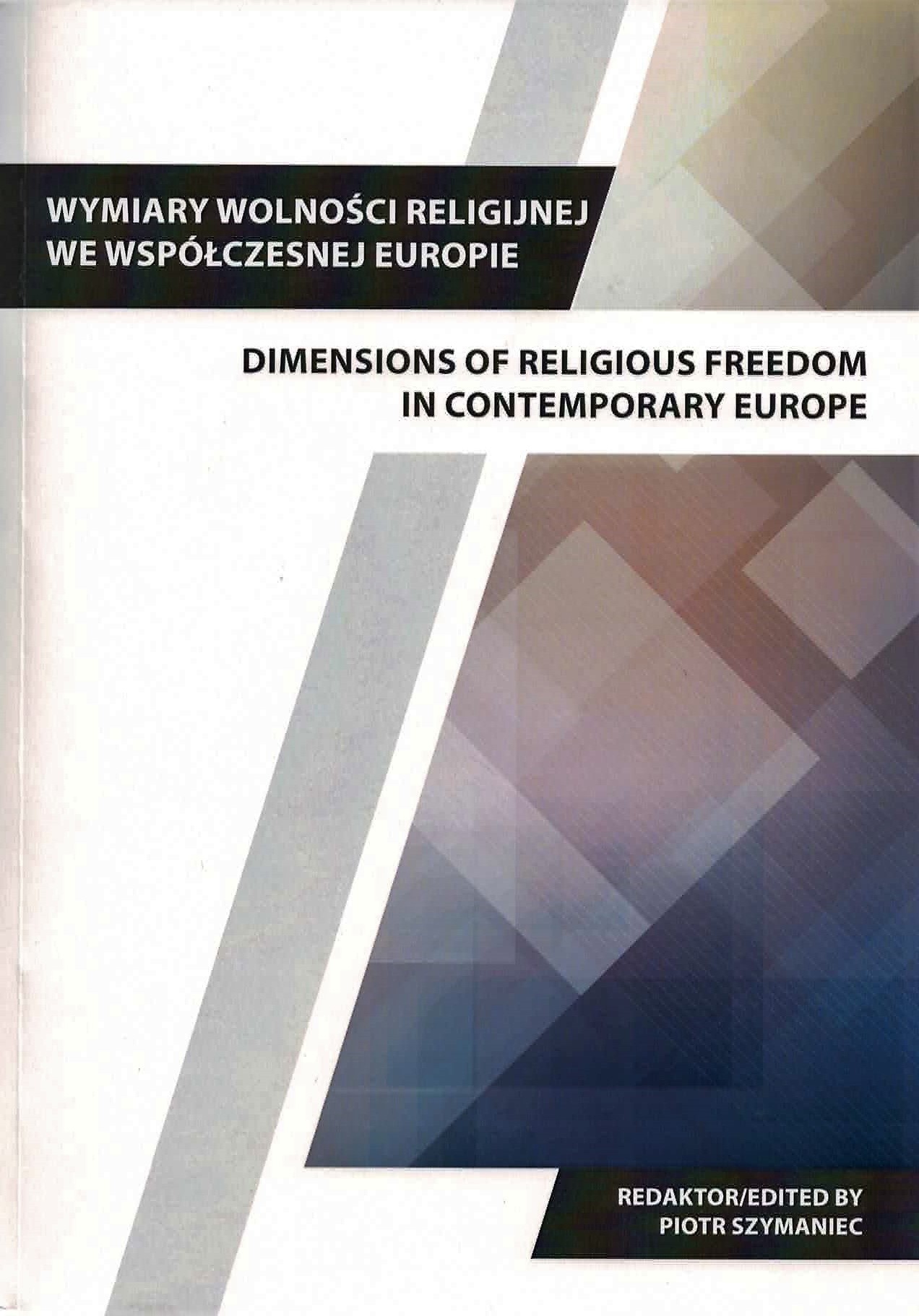 The book Dimensions of Religious Freedom in Contemporary Europe (502 pages) was published by The Angelus Silesius University of Applied Sciences in Wałbrzych (Poland) and edited by Piotr Szymaniec. Those interested in getting a printed copy can contact him at pszymaniec@poczta.onet.pl.
Preface
“Religious freedom, considered as an analytical category, is a subject of interest for scholars representing various disciplines. The dynamic, often turbulent transformations of the modern world, determined by the processes of globalization and Europeanisation, make it a crucial point of reference not only for legal, political, sociological and cultural analyses, but also for deepened philosophical and theological studies. The monograph Dimensions of Religious Freedom in Contemporary Europe is an integral part of this interdisciplinary perspective on the functioning of the complex social and political reality of Europe.
The structure of the book, which consists of six distinct parts, is the manifestation of interdisciplinary nature of the research on the subject. It contains the contributions of not only Polish specialists, but also Czech, Slovak, German, Ukrainian and Russian scholars, both the well-known members of academia of established position and young authors starting their careers. Moreover, the voices of representatives of international organizations and human rights associations complement the image of the analysed topic.
The publication of this book would not be possible without the valuable support of Professor Andrzej Czajowski, whose remarkable comments helped to shape the final form of its contents.”
Robert Wiszniowski, coordinator of the project “Analysis and diagnosis of the area of religious freedom in selected neighboring European countries (Poland, Czech Republic, Germany)”, financed by the funds of the National Science Center, granted by the decision No. DEC-2013/09/B/HS5/04436.
Table of Contents
Preface by Robert Wiszniowski (Polish)
“Freedom of religion or belief in Europe – some reflections on a changing landscape” by Kishan Manocha (English)
Historical Issues
The place of Christian religion in the constitutional system of old Poland” by Piotr Jurek (Polish)
“Jews in the Duchy of Warsaw 1807-1813” by Jacek Przygodzki (German)
“Historical and legal remarks on the year 1950 in Czechoslovakia” by Renáta Jakubčová & Michal Turosík (English)
“Office of Religious Affairs as a tool for controlling the religious freedom in relation to the Roman Catholic Church in Poland (1950-1989)” by Edyta Wlodarczyk (Polish)
“Legal regulations as an instrument for combating the freedom of conscience and religion of the totalitarian state: The example of Poland (1945-1956)” by Malgorzata Sosnowksa (Polish)
“The issue of the seminarians in the Polish Army during the rule of Wladyslaw Gomulka. The introduction of the subject” by Waldemar Seczyk (Polish)
Theoretical Issues
“The problem of religious freedoms and the legal conception of Petrazycki” by Mikhail Antonov (English)
“The problem of religious freedom in a republic (around the issues of ‘civil religion’ and republican patriotism)” by Rafal Lis (Polish)
“Religious freedom and legal consciousness: An integrative approach to legal regulation” by Maria A. Kapustina (English)
The European and International Dimension of Religious Freedom
“The long and bumpy road to the EU Guidelines on Freedom of Religion or Belief” by Willy Fautré (English)
“The freedom of religion and human rights standards in Europe: Reflections based on the jurisprudence of the ECtHR” by Agnieszka Wedel-Domaradzka (English)
“Public incitement to violence or hatred due to religion or belief as European crime” by Libor Klimek (English)
“The Holy See is a subject of international law” by Leslaw Kryzak (Polish)
Churches and Religious Associations in Poland
“The dynamics of historical claims: intentional or accidental? The example of the functioning of the Property Commission” by Ewa Letowska (Polish)
“Standards of religious freedom in the jurisprudence of the Polish Constitutional Tribunal” by Aleksandra Syryt (English)
“Option to choose the form of marriage as manifestation of freedom of religion in Poland” by Justyna Krzywkowska (Polish)
“Cooperation between the state and churches in the area of pro-family policy in Poland. Selected aspects” by Tomasz Rakoczy (Polish)
“The role of churches and other religious associations in preserving cultural heritage in Poland” by Mieczysław Rózański (Polish)
“Admissibility of denunciation of the 1993 Concordat concluded between the Holy See and the Republic of Poland” by Michal Stępień (Polish)
“Intermunicipal agreements for co-financing inter-school religious instruction points run by churches and religious denominations other than the Catholic Church: The example of Tarnowo Pedgórne” by Maksymilian Stanulewicz (Polish)
“The legal status of Jewish communities in contemporary Poland” by Ewa Waszkiewicz (Polish)
“Ritual slaughter as the right of religious minorities in Poland” by Pawel Kuczma (Polish)
“Constitutional guarantee of autonomy and self-government of religious associations as an expression of religious freedom: The example of the Polish Catholic Church” by Piotr Janowski (Polish)
Churches and Religious Associations and Religious Freedom in Europe
“Freedom to religion or freedom from religion? The antagonism between the right to freedom to religion and the right to live without it in the light of the principle state neutrality towards religion in Germany” by Christoph-Eric Mecke (Polish)
“The right to a Muslim funeral in the Federal Republic of Germany” by Katarzyna Zeszut (Polish)
“German church tax and the withdrawal from the Catholic Church: Consequences for a withdrawing person and constitutional doubts” by Pawel Selera (Polish)
“The freedom of conscience in the Czech legislation and jurisprudence” by Jan Wintr (German)
“The compensation of property of churches and religious associations in the Czech Republic: The law in force and the judgment of the Constitutional Court” by Stanislav Přibyl (German)
“The perspectives of religious education in the globalization context: The Russian case” by Elena Miroshnikova (English)
“Orthodoxy in Central Europe” by Andrzej Malkiewicz (Polish)
“Ukrainian churches and European integration policy: Human rights context” by Dmytro Vovk (English)
Non-European Context
“Religious freedom in Asian culture – Case study of Malaysia” by Pawel Raja (English)
Post Views: 132