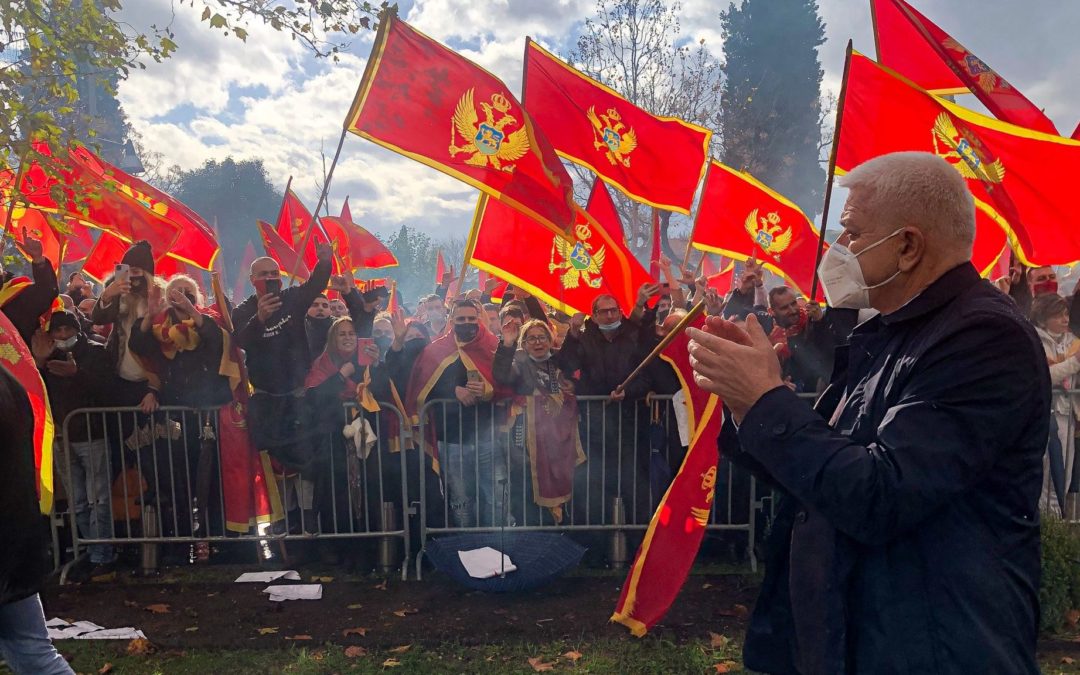 Thousands of supporters demonstrated in Podgorica on Monday, demanding that the new government withdraw changes to the hotly disputed Freedom of Religion Law – which had angered ethnic Serbs and the Serbian Orthodox Church.

Balkan Insight (28.12.2020) – https://bit.ly/3mTaSyh – Supporters of so-called patriotic organisations in Montenegro protested on Monday in the capital Podgorica against the new government’s proposals to change the hotly disputed Freedom of Religion law, erasing all elements opposed by the powerful Serbian Orthodox Church.

Waving Montenegrin flags and chanting against the new government, thousands of protesters called on MPs not to support the changes due to be voted on in parliament by the end of the year.

One of the organisers, Nemanja Batricevic, accused the new government of giving away assets to the Serbian Orthodox Church, and to Serbia.

Protests were staged in front of the parliament ahead of the debate about the proposed changes. Before the session started, former PM Dusko Markovic, vice president of the now opposition Democratic Party of Socialists, DPS, and party colleagues, greeted the protesters.

After the last parliament passed the law in December 2019, Serbian Orthodox Church priests, believers and supporters staged numerous protests demanding its withdrawal. The Church – whose relations with the previous government were already poor – claimed the new law would allow the state to confiscate its property.

On August 30, three opposition blocs won a slender majority of 41 of the 81 seats in parliament, ousting the long-ruling DPS, which had passed the religion law.

After the election, the new Prime Minister, Zdravko Krivokapic, promised that changing the law would be a priority. On December 18, the new government said it would change the law by erasing all elements previously opposed by the Serbian Orthodox Church.

The changes erase the main bone of contention – an obligation on religious communities to provide clear evidence of ownership in order to retain their properties.

There will also be no registration of religious buildings and sites owned by the independent kingdom of Montenegro before it became part of the Serb-dominated Kingdom of Serbs, Croats and Slovenes in 1918, later renamed Yugoslavia.

A DPS MP, Dragutin Papovic, said the proposals discriminated against two-thirds of Montenenrgin citizens. “This government gives a monopoly to only one religious community and only one nation. We will not allow this and will use all democratic ways to protect our citizens,” Papovic told a press conference.