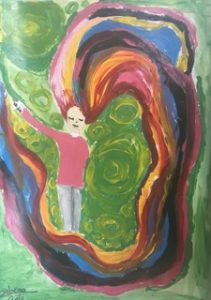 Painting by an SB OverSeas Beneficiary

As written by Raisa Elhadi, who is currently volunteering with SB Overseas in Lebanon

HRWF (22.03.2018) – This is a story of a girl named Sherine, but her name could be Amina, or Amal, or Sara, or any one of hundreds, even thousands of names of girls with almost the same story. Girls whose futures have been wrested from their control over and over again in so many different ways and who, somehow, still manage to feel hope and passion and optimism for a different, better life than their own. Sherine is only one of those girls.

Sherine’s family, like so many others, came to Lebanon seeking safety from violence. As a thirteen year old, Sherine had studied up until the fifth grade in Syria. Growing up she had aspirations of becoming a doctor, a dream only reinforced by the sight of all the violence she saw around her during the war. Sherine thought her family’s stay in Lebanon would be brief, and she would soon return to Syria to complete her studies and fulfill her dream.

Shortly after their arrival in Lebanon, Sherine’s mother asked her what she thought about getting married. There was a young man from the family’s town back in Syria who was interested in taking Sherine as a wife.

“It’s up to you,” Sherine shrugged, ambivalent. Marriage didn’t seem like a very big deal to her. How different could it be from the wedding games she played with her friends in her yard in Syria or in the streets of Shatila?

So Sherine’s family decided to wed her to the man from their town, and Sherine went along with it, unaware of the gravity of the union she was about to undertake. Within a month of fleeing to Lebanon, Sherine, still just thirteen years old, married a twenty-five year old man she barely knew.

Her ambivalence didn’t last long. From the very beginning, Sherine’s marriage darkened her life like a cloud. Rather than spending time with her parents and siblings, playing in the streets with her friends, or studying, Sherine spent her days cleaning and cooking for her husband. The only times she left the house were to fetch groceries and household supplies from the market, or on rare visits to her family’s house. Real marriage was nothing like a game. Instead, it was full of responsibilities and obligations that took up all her time and energy, crushing her youth and depleting the reading and academic skills she had built up in school.

Sherine’s family had tried to explain, before her wedding, the physical expectations that would befall Sherine as a wife. But Sherine had been a child, naive and unaware, and she hadn’t understood. Her wedding night came as a nasty shock.

Things got worse over time. Sherine’s housewife skills fell short, and that angered her husband. When he came home to an empty table or messy house, his temper swelled, and he began hitting her as punishment. Jealousy festered, and he forbade Sherine to put on makeup and forced her to wear long, loose abayas. Before long, Sherine’s husband was intervening in every part of her life. She spent her days trying to appease him, afraid of his anger and violence, fading to a quiet shadow of who she once was.

When her husband’s anger was especially bad, she would flee to her family’s house for comfort and safety. She asked her family to help her divorce her husband, but her mother tried to placate her instead.

“No marriage is ever perfect in the beginning,” she said. “Just be patient, and you’ll get used to him and begin to accept him.”

One day during a particularly fiery bout of rage, Sherine’s husband smashed the furnace in the kitchen. In his anger, he beat her and swore divorce upon her. Through her fear and pain, she felt a wash of relief and hope that maybe she could escape and go back to her life before. But as refugees, their marriage wasn’t registered, and both their union and their divorce were bound only through words. Soon after the fight, her husband took her back, and the nightmare resumed.

Sherine tried to be patient, but her marriage wore her down. Her husband’s anger carried into the bedroom, where he was rough and brutish with her. Evenings soon became a nightmare that was nearly too horrible for Sherine to bear. When she escaped to her family’s house, she begged them for a divorce.

Finally her family agreed, and they managed to register her marriage with the court so that her divorce could be officially recognised. Sherine’s nightmare was over, and she returned to live with her family. But she didn’t want any other girls to be put through what she had experienced.

She began to spread the word among her friends and peers about the true meaning of marriage. As a young teenager, Sherine had agreed to marriage blindly, without any understanding the responsibilities and realities of married life. She advised other girls never to accept early marriage, and revealed the details of what marriage could be like. She hoped that with the necessary knowledge and insight, other girls would be more aware than she was and would be able to protect themselves and, ultimately, their futures.