LEBANON: Education and Empowerment to #GiveHope to young girls 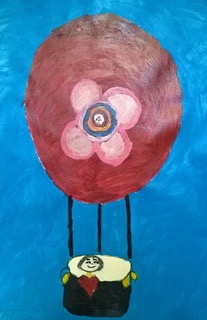 Painting by a SB OverSeas beneficiary

As written by Zuzana, a volunteer at SB OverSeas in Lebanon. SB OverSeas is currently working to provide education in Lebanon for 1,400 refugee children. This story shows how education and empowerment is an important tool in preventing child marriage from the perspective of those in the ground in Lebanon. Find out more about the work SB OverSeas does here: http://sboverseas.org.

SB Overseas (29.03.2018) – Before the war began, child marriage in Syria was on the decline. But this progress has become a mere memory during the past seven years of conflict as marriage for young girls has become for some, the only promise of protection and economic stability.

Parents who find themselves as refugees in a new country, as outsiders living in harsh and overcrowded conditions, are often more inclined towards immediate solutions, struggling to see or be persuaded by the long-term consequences of seeking or accepting marriage for their young daughters. And their children, whose lives were yesterday defined by going to school, playing, dancing and laughing with their friends, are today characterised by the load they carry—the weight of others’ expectations, responsibility and punishment for circumstances out of their own control. Child brides are left as onlookers, cut off suddenly and prematurely from their own childhoods and from the world of their friends.

Grandparents once had a particularly influential position in deciding when a parent or child asked for marriage; in many cases, they argued against their granddaughter’s marriage and for her right to learn and play. But the war has broken communities and separated generations, meaning that many are making decisions without the trusted voices of older family members, religious elders, and other senior authorities.

Teachers are often amongst the first to witness the drastic shift in young girls’ lives when they marry. They are saddened by every empty desk, where their former students once explored their ambitions and worked towards creating their own futures.

Ahmed, himself a Syrian refugee, teaches maths, Arabic, and English in an educational center hosting students from rural Syria, where the practice of child marriage had not completely diminished even before the war. When telling his experience over the past year, he expressed disappointment at the number of students he had seen forced to trade their school days for marriage and at the lack of understanding of the costs. For these girls, getting married means isolation in small, dark rooms of an unfinished shelter: their new home.

“They are not ready for this. They are the victims,” Ahmed said. Ultimately, parents make the final decision about the proposed marriage, a decision for which the girls are not accountable, he explained.

Aisha, who a psychologist in the same center, adds that girls marrying at a young age, often as young as thirteen, are especially vulnerable to emotional and physical abuse. They are unprepared for the traumas that may accompany marriage, she said, including miscarriage, loss of childhood and divorce. A young divorced girl may face mistreatment for the rest of her life because of the stigma associated to the latter in her community. This stigma may keep her from regaining normalcy: a childhood and an education.

Ahmed, as a father, has been able to speak with some of the students’ fathers, who are normally the family’s decision makers. From his experience, several fathers are open to discussion and reconsideration. Aisha leads awareness and empowerment sessions with young girls at the center teaching them about healthy relationships, self-worth and goals for the future. She also encourages mothers to help their daughters feel comfortable talking about their fears and dreams. One mother in the community now takes her daughter for daily walks. During this time together they talk about anything and everything, thus breaking harmful taboos.

Only education and long-term engagement within a community that has lost critical support systems can shift todays’ trends in child marriage. Ahmed and Aisha’s strategy to bring their community closer and building trusting relationships is a long-term one; it is careful, and it is effective. Their work has allowed lasting change for girls and their families. They hope not only to preserve the future of this generation, but to place the power of decision in their hands—hands that will one day rebuild their country.