Lebanon: A child separated from her child 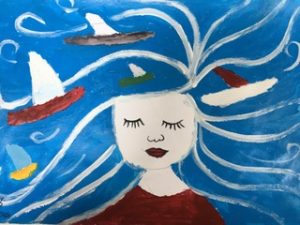 By Jade-Leigh Tenwick, Communications and Development Officer at SB OverSeas

At twelve years old, Yosser was asked for her hand in marriage. Her life had been normal up until the disruption caused by the Syrian conflict. She had spent her childhood going to school and playing with her friends in the neighbourhood. This all changed with the outbreak of the civil war which led to her family seeking refuge in Lebanon when she was nine years old. Three years later, an eighteen year old boy sought her hand in marriage.

Her father at first refused as he was unsure of the marriage and its implications on Yosser’s life. However her grandfather along with the rest of her family pushed the idea of marriage and she found herself, at age thirteen, at the local commune registering to be married and living in a house full of strangers. Her family had spoke of marriage in an almost fairytale-like way and told her she would be happy. It only took three weeks for the fairytale to be shattered with one hit which turned into many more. The violence was random and trivial.  Asking for some chocolate was one of the instances given for him hitting her. After eight months of daily violence, she ran back to her family pregnant.

However, her family were not supportive of her decision to leave and forced her to return to her husband. One day, in a fit of anger he tore up their marriage papers so that there was no proof of them being married. This had serious ramifications as the child would be assumed to be born out of wedlock meaning not only would he carry the social stigma of being an illegitimate child in the society, but also he would be unable to register in Lebanon.

This led to Yosser’s family seeking legal advice from the UNHCR and with the help of a lawyer, they received not only acknowledgment of the marriage, but also a divorce paper. However along with the divorce came the realisation that her unborn child would be given to the husband from the moment of birth.

Yosser is now attending SB OverSeas empowerment courses where she is given a safe space to talk about the experience she went through as well as receiving support to deal with the trauma of separating from her child. One day, with our support, we hope that she will have the opportunity to dream again.

SB OverSeas has three schools and empowerment centres in Lebanon working to serve those displaced from the Syrian conflict. We believe education and empowerment is the key to a better future and that every child should be afforded the right to it.