IRAQ: The vision of the Chaldean Patriarchate about the future of the Christian towns in the Nineveh Plain 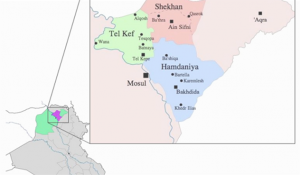 Patriarchatus Babylonensys Chaldaeorum (29.10.2017) – http://saint-adday.com/?p=19864 – Christians are not alien to Iraq, but are in fact the indigenous people in the country. Their history, their identity and their roots, go back thousands of years. Today, despite the decline in their numbers due to ethnic and religious violence, threats, kidnapping, killing, looting and bombing of their churches in particular by ISIS in Mosul and the Nineveh Plain, they still strive to preserve their future with dignity and full equality with their fellow Iraqi citizens.

It is obvious that displaced Christians from the Nineveh Plain, who are trying to resettle in their towns, now find themselves in a difficult situation.

Seven months ago, Mosul and the Nineveh Plain were liberated from the grip of the Islamic State, “ISIS”.  However, to this day, some Christian towns are still empty of any residents because of the great damage inflicted upon the houses and infrastructure there.  This is mainly due to the inability of the central government to rebuild them due to lack of funds, and a failure to place equal importance on the return of the Christian population.  So far, what resettlement has taken place, and the housing and infrastructure that have been repaired, has mainly been achieved through the modest efforts of the Church.

The other problem is that the jurisdiction over the Plain of Nineveh, which was unified, stable and secure until 2003, is disputed today between the Iraqi government and the Kurdish forces.

Since the KRG referendum for independence in September, making clear their desire to secede, there have been repeated military confrontations between the Iraqi Army and the Popular military mobilization Groups (Al-Hashd) on one side, and the Kurdish Peshmerga on the other.  These confrontations have taken place on the borders of the Christian towns of Nineveh, and most recently in the towns of Baqofa and Teleskof.  In these recent confrontations innocent children were wounded, and the homes of Christian families were used as defensive positions.  As a result, many residents from these towns have fled again, creating a renewed state of anxiety and fear of conflict between Baghdad and Erbil, which in turn is resulting in new divisions and prevents reconstruction and the return of people to their homes.  All of which will ultimately lead to further migration abroad.

In order to preserve Iraq’s cultural and demographic diversity, which has historically contributed to the renaissance and vitality of the country, we call upon the Iraqi People to realize the importance of the presence of Christians in Iraq, to protect them, and not force them to emigrate. This would be a qualitative loss for everyone in Iraq.

To achieve security and stability, we recommend the following:

Finally, we call upon the political parties and the Christian organizations to achieve this mission in a unified manner, and to reject their differences, in order to reach the one common goal, and to open a new page in such a difficult circumstance, as the Chaldean Patriarchate has opened its heart to everyone, for the sake and good of all.

On this occasion, we fervently renew our call to the Iraqi government and the KRG, to sit at the table of dialogue to review the situation and resolve all the outstanding problems in a new spirit, high courage and full responsibility for the good of the country.  In this, both sides must know that the suffering people of Iraq and Kurdistan reject the continuation of war.