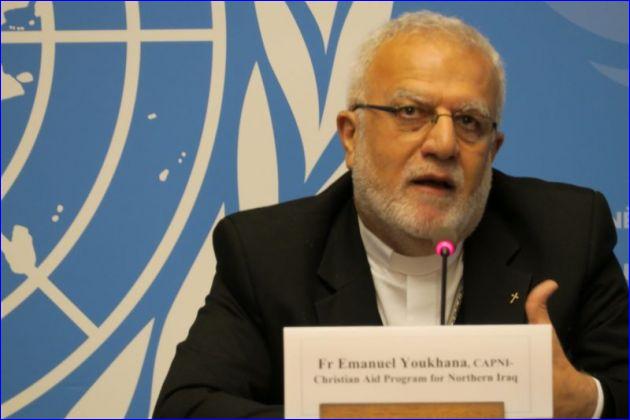 Father Emanuel Youkhana leader of the Assyrian Christians and head of CAPNI (Christian Aid Program Northern Iraq), speaking at a Dec. 12, 2016 press conference at the United Nations in Geneva about a report of the World Council of Churches (WCC) and Norwegian Church Aid (NCA), a member of the ACT Alliance on the plight of ethnic and religious minorities in Syria and Iraq. (Pic: Peter Kenny)

He recounts that around June 2014 the numerical religious minorities such as Yazidis and Christian around Iraq’s second biggest city began to face a horrific onslaught by the group calling itself IS (Islamic State), or Daesh in Arabic.

Mosul was once one of the major centers of Christianity in Iraq and it had once again become a place of genocide against them, he said.

“Since October this is now the second month of liberation,” said Emanuel, but he said much apprehension still remains for what will happen after IS is defeated militarily.

“As pleased as we are that our homelands from which thousands of Christians were forced to flee from the extremists, are being retaken, we are very concerned about what lies ahead,” Father Emanuel said at the United Nations in Geneva on 12 December.

Archimandrite Emanuel Youkhana, leader of the Assyrian Christians and head of CAPNI (Christian Aid Programme Northern Iraq), spoke at a 12 December press conference and later at a seminar about a report of the World Council of Churches (WCC) and Norwegian Church Aid (NCA), a member of the ACT Alliance.

The report, which was first released in Oslo on 28 November, is titled, “The Protection Needs of Minorities from Syria and Iraq”. It was funded by the Norwegian Ministry of Foreign Affairs.

“We were quite sure that we would one day be enabled to go home to our towns and villages. We live in this hope,” Emanuel said.

Many of Iraq’s religious minorities live in the north, including Christians and Yezidis.

The Assyrian Christians who constitute the most populous Christian group in Iraq speak their own languages and do not necessarily identify as Arab, the report explains.

Consequently, they regard themselves, and are regarded by others, as a distinct ethnic group.

The Yezidis are predominantly Kurdish speaking, with homelands in Iraq and the Kurdistan region of Iraq. Since 2003, much of the Yezidi homeland of Sinjar has been under the control of the Kurdish Regional Government (KRG), although it officially remains under the jurisdiction of the central government of Iraq.

While many Yezidis are willing to identify as Kurds, they see themselves as a distinct ethnic group but they have faced turmoil under IS and even before that as they have been “totally unjustifiably accused of being devil worshippers”.

Emanuel reiterated that Christian leaders in Iraq estimate that, as of November 2016, there are fewer than 250,000 Christians remaining in the country.

According to estimates in the WCC-NCA report around 70 percent of the Christians in Iraq have left the country since 2003 and most of those who remain are internally displaced.

Emanuel showed photos he had taken of damage in Christian areas and he said that regretfully sectarian messages had been painted on some of the walls by members or the Iraqi national arm fighting Iraq.

He even noted there were German messages sprayed on the walls, “put there by German Jihadis”.

“As much as we are pleased that the military operation have started we hope there will not be attempts by the victors to change the demographics of the area,” said Father Emanuel.

He noted that there were a number of main religious and ethnic minorities around Mosul — the Iraqi indigenous community; the Jewish community; the Mandeans or followers of John the Baptist, the Yazidis and the Christians.

In Iraq before Arabization

“They all lived in Iraq before Arabization.”

None of these peoples had been introduced in the Iraqi school curriculum.

“We were even neglected before Daesh came to uproot us physically. I don’t want this to be repeated.”

He said that over 100 years, three generations of his family had faced genocide attempts — first under the Ottomans, then after the formation of the Iraqi State in 1933 and now the latest attempt by IS.

Peter Prove, the director of the WCC’s Commission of the Churches on International Affairs said that Iraq faces a “litmus test” after the fighting for Mosul ends. “Society diversity is the best bulwark against sectarianism.”