IRAQ: More than 12,000 private homes on the Nineveh plains damaged by ISIS 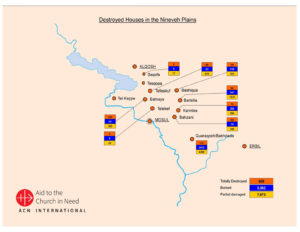 Aid to the Church in Need (27.03.2017) – More than 12,000 private homes in twelve Christian villages on the Nineveh plains were damaged by the “Islamic State”. A total of 669 houses were completely destroyed. These were the findings of a study initiated by the pontifical foundation Aid to the Church in Need. According to the study, the costs for rebuilding will vastly exceed 200 million dollars.

As part of the study, 1,500 families who fled to Erbil from the affected regions were also asked whether they intended to return to the – now liberated – places they had come from. 1,308 of these responded.

Currently, there are still 14,000 registered families who fled from Mosul and the Nineveh plains living in Erbil. This is approximately equal to 90,000 people, down from originally 120,000 in 2014. Of these, twelve thousand families continue to depend on humanitarian aid from Aid to the Church in Need.

The study, carried out by Aid to the Church in Need with the help of local church employees, consisted of three parts: first, the damages done to private homes by ISIS was ascertained. The findings of the investigation on the damages to social institutions such as schools and clinics as well as to church buildings will follow.

The evaluation and reconstruction process

In November 2016, Aid to the Church in Need agreed with the leaders of the 3 major Christian rites of the Nineveh Plains (Chaldean Catholic, Syriac Catholic and Syriac Orthodox) to hire teams of engineers who would be able to go village per village, house by house, and document the extent of damages, with the view of estimating the costs of repair. 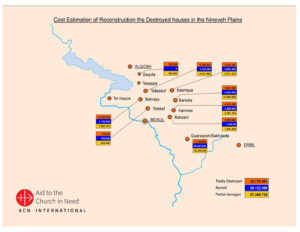 In early February Aid to the Church in Need representatives went to Erbil and met with these engineers, who also showed them the satellite photography they had used, with the cooperation of the international alliance stationed in Erbil. These figures result from these studies.

Aid to the Church in Need has all the details that the engineers used, the same software and type of photos used to describe the damage. Reports are in English and in Arabic. The registers of all the families in need (the 90,000 people) is kept with the Chaldean Archbishop of Erbil and is always up to date (families come every week for the aid packages and amend the register when necessary).

In a historical first, the 3 rites have formed a joint Reconstruction Committee to be able to apply to the EU and other funding sources.

Reconstruction started on 6 February in Tel Skof, 170 families have already moved back. We are supporting them with the reconstruction of the school, which should be ready by the end of June, allowing the parents to register their children for the September new school year.