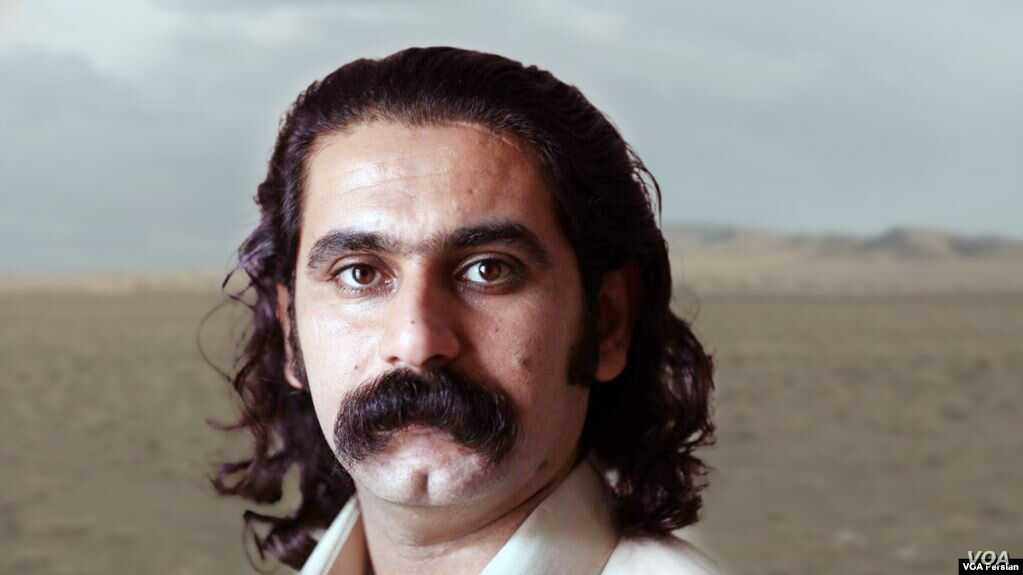 Undated photo of Reza Yavari, an Iranian Gonabadi Dervish activist who was arrested in Tehran in February 2018, released from a prison in Ahvaz upon receiving a pardon in April 2020, and later forced into internal exile. (VOA Persian)

VOA (28.05.2020) – https://bit.ly/3eBWqXz – Members of Iran’s Gonabadi Dervish religious minority have faced more harsh treatment from Iranian authorities, with one recently freed dissident being sent into internal exile and another detained activist being forced to stay in a coronavirus-plagued prison system far from home.

In a Friday phone interview with VOA Persian, Iranian Dervish activist Reza Yavari said he recently was forced to relocate to the northeastern town of Taybad in Razavi Khorasan province to start a two-year punishment of internal exile, following his April 1 pardon and release from a prison in the southwestern city of Ahvaz, capital of Khuzestan province.

Yavari, who is from Khuzestan and had been studying at a Tehran university prior to his 2018 detention, accused authorities of acting illegally by forcing him into internal exile after granting him a pardon.

Yavari was among more than 300 Dervish community members arrested for involvement in anti-government protests in Tehran on February 19-20, 2018. The protests escalated into violent street confrontations between Iranian security forces and the activists. Five officers were killed.

Iranian authorities later sentenced Yavari to five years in prison followed by two years of internal exile on charges of assembly and collusion against national security. They transferred him from the Greater Tehran Penitentiary to Ahvaz’s Sheyban prison last year.

Iranian Supreme Leader Ayatollah Ali Khamenei issued a decree pardoning Yavari and a number of other prisoners on April 1.

In a separate move, Iranian authorities have granted temporary releases or furloughs to tens of thousands of prisoners since late February, in part to protect them from the coronavirus that has spread through Iran’s overcrowded and unsanitary jails in recent months. But they have refused to furlough dissidents sentenced to five or more years in prison for activities designated as security offenses.

Iranian law is unclear about whether a person whose prison term is commuted through a pardon still has to observe other aspects of a sentence, such as a period of internal exile.

Iranian judiciary regulations for granting amnesty to convicts, as published by the Iranian parliament’s research service, contain the following clause: “Pardoning shall not make … sentences ineffective, diminish the execution or enforcement of verdicts and judgments or lessen the effectiveness of decrees.”

Yavari told VOA that 38 other Dervishes, who were arrested during the February 2018 protests and later released, have been forced, like him, to go into internal exile. He also expressed concern about Iran’s ongoing imprisonment of another eight Dervish activists detained in the protests: Kianoush Abbaszadeh, Mostafa Abdi, Abbas Dehghan, Vahid Khamoshi, Mohammad Sharifi Moghaddam , Kasra Nouri, Amin Safari and Reza Sigarchi.

One of those detained activists, Kasra Nouri, was sentenced to 7½ years in prison followed by a period of internal exile for several alleged security offenses. After his initial detention at the Greater Tehran Penitentiary in 2018, authorities transferred him to a prison in the south-central city of Shiraz in December 2019, leaving him far from his family’s home in the Iranian capital.

An Iranian Dervish community member who is close to Nouri’s family and spoke to VOA Persian last Thursday said the judiciary has rejected the family’s appeals for Nouri to be furloughed while the coronavirus spreads in Iranian prisons.

The Dervish source who spoke on condition of anonymity said Nouri’s family members also have appealed for authorities to send Nouri back to prison in Tehran, where they live. But the source said Nouri received a judiciary letter notifying him that he is considered a resident of Shiraz and must serve the rest of his prison term there. It was not clear on what basis Iranian authorities made that assertion.

Article 513 of Iran’s criminal code, as published by an Iranian law firm, states that people sentenced to prison should be jailed as near as possible to their place of residence, unless a judge decides that doing so would be a perversion of justice.

“Nouri’s family believes his transfer to Shiraz prison is an unofficial exile intended to punish them, as some family members also are Dervish community activists,” the source said.

The Dervishes involved in the 2018 protests had been demanding the release of arrested members of their community and the removal of security checkpoints around the house of their elderly leader, Noor Ali Tabandeh. He later died in December 2019.

Members of the Sufi Muslim religious sect long have complained of harassment by Iran’s Shiite Islamist rulers, who view them as heretics.