IRAN: News from Baha’is in jail in October

Sen’s Daily (29.10.2019) – https://bit.ly/2NqtS7t – The Revolutionary Court in Semnan has sentenced three Baha’is who were arrested on April 30 to ten years in prison on charges of “membership of illegal groups acting against national security” and “acting against national security through propaganda and organizational activities.” Ardeshir Fenaa’eyan, who is 30 years old, has been sentenced to ten years in prison and one year exile in the town of Khash in Sistan and Baluchestan Province; Behnaam Eskandreyan and Yalda Firouzeyaan, aged 20, have been sentenced to five years in prison and two years’ exclusion from the city of Semnan. They were arrested by teams of four to six masked agents from the Ministry of Intelligence in Semnan, in simultaneous raids on their homes at 8 a.m. on April 30.

Sen’s Daily (20.10.2019) – https://bit.ly/2JkM8Oq – Mr. Ataa-ollah Zaffar was released from Evin prison “in recent days,” after about three weeks in detention. His family obtained his release following serious concerns about his health in detention.

On 27 September, security agents raided a number of Baha’i homes in Tehran and Karaj, seizing various personal effects. Behrouz Asadollah-zaadeh and Mr. Zafar are among those whose homes were searched. Mr. Zafar was then arrested. At least five other Baha’i homes were raided, and agents went to the home of Waliollah Qademiyaan  to search it, but found nobody home.

Sen’s Daily (16.10.2019) – https://bit.ly/2JjHD6J – Fuzhaan Rashidi has been granted a conditional early release after serving just over one third of her three-year sentence. She was released from Esfahan prison on 15 October. She and her recently-married husband Milaad Daavadaan were among a group of people arrested Baharestan, near Isfahan, on 23 September 2018, by agents from the Ministry of Intelligence. Milaad Daavadaan was sentenced to six years in prison. Fuzhaan Rashidi was sentenced in a Revolutionary Court to three years for “membership of the Baha’i organisation” with a concurrent one-year sentence for “propaganda against the regime.” This was confirmed by the Review Court.

Sen’s Daily (14.10.2019) – https://bit.ly/2BCMj3g – On 21 September, Paymaan Damashqi, a Baha’i from Karaj, was sentenced to one year in prison by the Revolutionary Court. The trial, lasting less than 10 minutes, was held on 19 September. The trial is reported to have taken place at both the Prosecutor’s office and the revolutionary court, suggesting that the Prosecutor also acted as Judge, which would be highly unusual. A relative said that Mr. Damsashqi did not accept the charge of “propaganda against the regime” and did not know what it was based on. Therefore he has not, thus far, made any comment on it himself. He was initially summoned in writing by the Police in Karaj in February this year. When he went to the Police station, his mobile telephone was confiscated and he was questioned for half an hour. He was told that he had posted an article entitled “Justice” under the pen-name “A certain Baha’i”, and the use of this name constituted, indirectly, propaganda for the Baha’i Faith. When he asked to see the article attributed to him, the interrogator refused.

The Judge offered him release on bail of 50 million tumans, but he was not able to pay that amount. Two days later he was released when the business licence of a friend was accepted as bail.

In recent days, Sima Behrouzi was sentenced to three months in prison in the Revolutionary Court of Yazd, presided over by Judge Dashtipour. She was charged with membership of a group opposing the regime. She was summoned in writing by the Police in Yazd on 20 March this year, and questioned about her membership of Telegram groups. After some time she was summoned to Branch 4 of the Revolutionary Court, and charged with “membership of a group opposed to the regime” and “propaganda in support of a group opposed to the regime.” Bail was set at 250 million tumans, which she could not provide, but she was released on bail two days later. On 2 July 2019, she was summoned to a hearing on August 18 at the Revolutionary Court. The summons specified the charges as “membership of the Baha’i community,” and “Baha’i propaganda.” The sentence, of three months in prison, was announced in the last week of September.

In recent years, a number of Baha’is in Yazd have been sentenced for activities on internet. 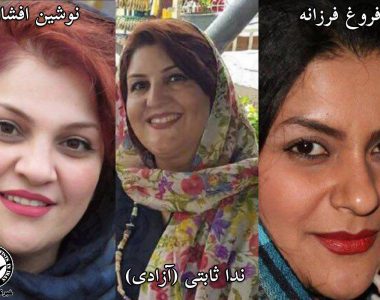 HRANA (12.10.2019) – https://bit.ly/3629B0v – Three Baha’i residents of Abadan and Ahvaz, Neda Sabeti (Azadi), Forough Farzaneh, and Noushin Afshar were each sentenced to a one-year prison term for the charge of “propaganda against the state” by the Revolutionary Court of Abadan.

Azita Rafizaadeh released at the end of her 4-year sentence

Sen’s Daily (10.10.2019) – https://bit.ly/2qKszZz – Azita Rafizaadeh has been released from Evin Prison after serving a four-year sentence for teaching online classes in computer engineering to members of the Baha’i Faith. Under Iran’s apartheid system, Baha’is are banned from gaining advanced qualifications in tertiary institutions in Iran, although there is no formal law against teaching one’s skills to others. Nevertheless, she was charged with “undermining national security” for teaching at the Baha’I Institute for Higher Education (BIHE). In January, 2018, she was offered prison furlough if she would sign a statement to repent for her work and promise that she will not work with the BIHE again. But she said she had done nothing to repent for.” Her husband Peyman Koushk-Baghi was also imprisoned in October 2015, for teaching at the BIHE.

In 2014, Judge Moqisseh of Branch 28 of the Tehran Revolutionary Court sentenced Rafizadeh to four years in prison and her husband to five years in prison on the charge of “membership in the illegal and misguided Baha’i group with the aim of acting against national security through illegal activities at the BIHE educational institute.”

The imprisoned couple’s son, Bashir Koushk-Baghi, has been raised by another Baha’i family.