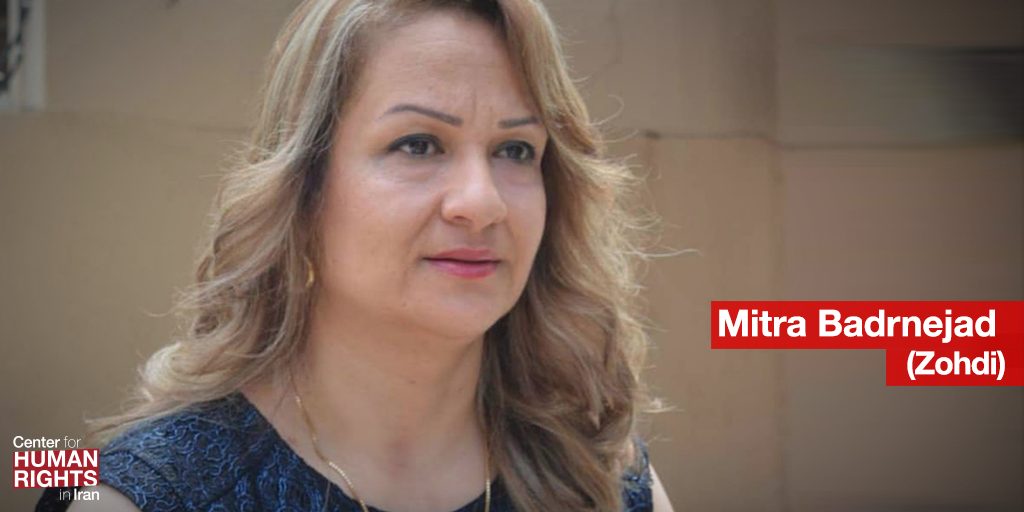 Center for Human Rights in Iran (26.09.2019) – https://bit.ly/2mcW43Y – A Baha’i woman has started serving a prison sentence and a Baha’i man was charged with national security crimes for his peaceful social media activities. These cases demonstrate the Iranian judiciary’s ongoing persecution campaign against the minority faith.

Mitra Badrnejad (Zohdi), 51, reported to prison in the city of Ahvaz in southwestern Iran on September 22, 2019 to begin serving a one-year prison sentence. Her son, Rouzbeh Zohdi, informed the Center for Human Rights in Iran (CHRI) that she was charged with being a follower of the banned faith after being subjected to “psychological torture” in the custody of the Intelligence Ministry.

“My mother’s attorney defended her in court and noted that there was no evidence that she had committed any crime,” Zohdi said. “But the judge responded, ’I want to go back to the time at the beginning of the [1979] revolution when judges issued much better sentences against you people,” he said. “What the honorable judge was referring to was the mass execution of Baha’is in the early days of the revolution.”

Iran’s Constitution does not recognize the Baha’i faith as an official religion (such as Islam, Christianity, Judaism and Zoroastrianism). Although Article 23 states that “no one may be molested or taken to task simply for holding a certain belief,” followers of the faith are denied many rights. Baha’is are one of the most severely persecuted religious minorities in the country.

Badrnejad was convicted of “membership in the Baha’i organization” and “propaganda against the state” by Branch 2 of the Revolutionary Court in Ahvaz presided by Judge Zare (first name unknown). Judge Zare sentenced her to five years in prison and two years in exile.

Security agents confiscated her computers, phones and gold jewelry with Baha’i symbols on it during a raid of her family’s home on March 2, 2018 when they arrested Badrnejad.

None of her possessions have been returned.

“My mother was held in solitary confinement for 50 days in the Intelligence Ministry’s detention center and Sepidar Prison in Ahvaz and then released on bail,” Zohdi said. “We actually gave the deed to our house as collateral [for bail].”

“My mother said that on all the days when she was interrogated, she sat on a chair, blindfolded, in front of a wall, and her interrogator stood behind her, insulting her with very ugly words. On one occasion, they threatened her sons and she was very afraid. Fortunately it was only psychological torture, not physical.”

Zohdi continued: “Unfortunately, we weren’t given a copy of the verdict. They didn’t even give a copy to her attorney. The attorney was only allowed to read the verdict. As far as I know, my mother’s charges were based on Baha’i functions she organized at our home and for having Baha’i books. Baha’is have religious functions every 19 days and some of them were held in my mother’s home.”

Farid Ziragi Moghaddam, a 24-year-old Baha’i cobbler in the city of Birjand, eastern Iran, was charged with “acting against national security” for running two channels promoting his faith on the Telegram messaging app, including Nedaye Solhe Baha’i (Baha’i Voice of Peace).

A source with detailed knowledge of his case told CHRI he was pressured to make a false confession.

“On the morning of [August 4, 2019], two men came to Farid’s house, where he lives with his mother, holding a folded piece of paper that they said was a search warrant,” a source close to Moghaddam told CHRI on September 22.

“As soon as they came inside, two other men with cameras followed and started filming,” added the source who requested anonymity for security reasons. “The four agents searched the house, gathered personal items such as a computer, memory chips and a phone, and blindfolded and handcuffed Farid as if he was a dangerous criminal and took him away.”

The source added: “After a few days in detention, he was taken to the Revolutionary Court in Birjand and granted bail set at 150 million tomans ($35,580 USD). They asked him to write down any complaints and he said he had no complaints… But then he was returned to the Intelligence Ministry’s detention center and interrogated for 26 days in a row.”

During interrogations, Moghaddam’s apprentice was accused of trying to “intensify sanctions against Iran” with his social media posts, according to the source.

Branch 1 of the Revolutionary Court in Birjand is currently processing Moghaddam’s case.

“The interrogators asked about his contacts with prominent Baha’is and his interviews with foreign media,” the source told CHRI. “They said he created channels on Telegram to promote the Baha’i faith, but in reality all of the subscribers to his Baha’i channels were Baha’is who discussed their own issues and beliefs.”

“They told him if he didn’t cooperate, they would do something terrible to the Baha’i community and blame it on him and make sure he was excommunicated, but he refused to say anything he didn’t believe in,” the source added.

“Then one day while he was sitting blindfolded, someone sat on a chair behind him and said he had come from Tehran to help him. He made Farid make a pledge that he would not engage in any propaganda against the state or face severe punishment. Farid had told them that he had never acted against the state and was worried that making the pledge was an admission of guilt that would get him into trouble. They told him if he signed the pledge he would be freed, so he did it, only because he wanted to be released.”

The source added: “Farid’s family want him to be acquitted because he’s innocent… His parents are sick with serious medical issues. In fact, he financially supports the family. He’s the only family member who works. The family is not financially secure. His father is deaf, his brother was crippled in an accident, and his mother is unable to work.”