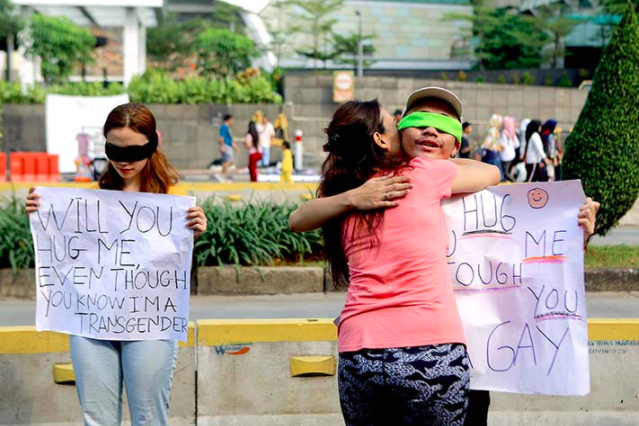 The Jakarta Post (18.10.2020) – https://bit.ly/3e0szJj – Amnesty International Indonesia has condemned the Indonesian Military (TNI) for the recent imprisonment and dismissal of a soldier for having same-sex intercourse with another officer, calling the sentence unjust and dangerous to the community.

“This unjust sentence should be immediately overturned and the individual immediately released. No one should be persecuted based on their actual or perceived sexual orientation,” Amnesty International Indonesia’s executive director Usman Hamid said in a press statement on Saturday urging the military to end its campaign against the community.

He argued that the ruling would set a dangerous precedent for other service members thought to have engaged in consensual same-sex activities.

“It further enshrines discrimination and risks inciting violence against perceived LGBT people inside the military and in wider society,” Usman said.

The Semarang Military Court declared a chief private, identified only as P, guilty of violating Article 103 of the Military Criminal Code on disobedience to service orders, after being found having sex with a subordinate in the Armed Forces. The court sentenced him to one-year imprisonment and dishonorably dismissed him from the military.

Amnesty, he said, urged the government to send a clear message to the public that discrimination on the basis of sexual orientation or gender identity would not be tolerated, including in the military. He highlighted that state institutions should lead by example and not undermine commitments to human rights’ protections.

“Indonesia has to repeal this archaic and discriminatory provision in the criminal code and other regulations. The government must reform when it comes to the rights of LGBT people,” he added.

According to Amnesty records, this was not the first case of a soldier being prosecuted because of their perceived sexual orientation. A military officer in Denpasar, Bali, was convicted in March under the same article for having same-sex consensual relations with three men. The officer filed for an appeal but the Surabaya Military High Court backed the martial court in Denpasar.

Usman further said that criminalization of consensual same-sex conduct violated rights to privacy and to freedom from discrimination as stipulated in the International Covenant on Civil and Political Rights (ICCPR).

The TNI, however, has defended the sentence against P, arguing that homosexuality in the force would be met with firm punishment.

Lini Zurlia, an advocacy officer of the cross-border organization for LGBT rights ASEAN SOGIE Caucus, also criticized the punishment. She argued that the officer’s sexuality was a private matter, adding that the ruling could have further impacts on members of the Indonesian LGBT community.

The National Police also announced that the force would hand down ethics punishments to personnel found to engage in LGBT activity following the reports of alleged LGBT members in the military, spokesman Brig. Gen Awi Setiyono said.

“The police will take firm action, a code of conduct sanctions awaits,” Awi said, referring to regulations such articles in the 2014 National Police code of ethics that stipulate that all personnel should follow moral, religious and legal norms as well as local wisdom.

While homosexuality is not illegal in Indonesia, there has been growing anti-LGBT rhetoric in the past years with members of the community facing discrimination and hate crimes.

Photo: Love wins: A passerby hugs an activist campaigning for the rights of the lesbian, gay, bisexual and transgender (LGBT) community during Car Free Day in Jakarta on June 16, 2019. (JP/Seto Wardhana).