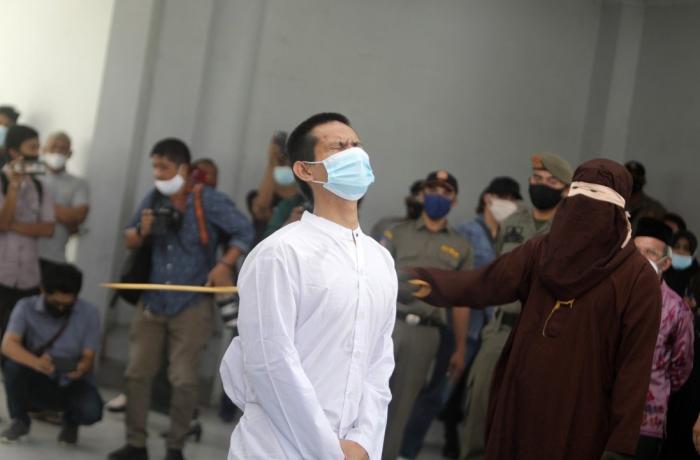 During the flogging, the two, in their 20s, shouted and begged for mercy several times. The mother of one of them passed out on hearing the cries of her son. A “show” that has raised criticism from activists and human rights NGOs. For local officials, sharia-based verdicts must be applied and cannot be waived.

Asianews / Agencies (29.01.2021) – https://bit.ly/3clrexP – A homosexual couple from Aceh, the most conservative Indonesian province and the only one in which Islamic law is in force, were flogged 80 times in a “public show” that has raised criticism from activists and human rights NGOs. The execution of the sentence took place yesterday: both had been sentenced to 80 blows for acts contrary to Islamic morality (relations between people of the same sex).

The authorities refused to reveal the identity of the two, who repeatedly screamed in pain during the lashes, begging the executioner for mercy. The officers called to enforce the verdict continued regardless of the shouts, hitting them on the back with a rattan stick. In a moment of pity, the officers stopped the flogging to allow the two young men, in their twenties, to quench their thirst and then resume with the blows.

During the execution of the sentence, the mother of one of the two passed out hearing the screams of pain and the pleading of her son.

Public official Heru Triwijanarko stresses that sentences under the sharia are final and cannot be waived. The two had been arrested in November, after the landlord of the house they had rented found them half naked in a room. Also yesterday four other people, between 17 and 40 years old, were whipped for drinking alcohol or meeting “people of the opposite sex”.

In the past, activists and human rights groups have called for a moratorium on flogging and President Joko Widodo himself has said he is against this type of punishment. However, it enjoys broad support from the majority of the local population.

About 98% of Aceh’s five million residents are Muslims. Sharia law came into force around 2005 following a peace agreement between Jakarta and the Movement for the liberation of Aceh (Gam), an Islamic separatist group. According to Islamic law, even “hugging” is part of a series of crimes (such as gambling, alcohol consumption or extramarital affairs) punishable by a specific number of whips. Article 63 of the Local Penal Code (Qanun Jinayat) prohibits homosexual practices, considering them acts of sodomy.

In the rest of the country, same-sex relationships are allowed, if they are over the age of consent.