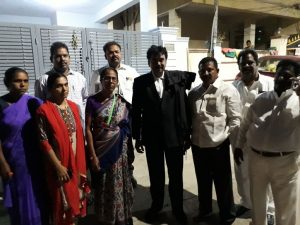 The Christians were released on bail late in the evening on 3 April, two days after their arrest on Easter Sunday (World Watch Monitor)

World Watch Monitor (05.04.2018) – https://bit.ly/2HkBfKl – Four Christians, including the wife of a church leader, have been charged with “hurting religious sentiments” after they handed out Christian tracts during an Easter procession in India’s southern Telangana state.

Rayapuri Jyothi, 38, Meena Kumari, 52, Mahima Kumari, 35 and Bagadam Sudhakar, 45, were taken into custody by police in the state capital, Hyderabad, at around 5.30 pm on Easter Sunday following a complaint by the leader of a local group affiliated with the Hindu nationalist Rashtriya Swayamsevak Sangh. They were later charged and released on bail on Tuesday, 3 April.

Jakkula Vinay Kumar, the patron of the Hindu Jana Shakti group, alleged the 20-25 Christians taking part in the march had entered the slum in the Dayarguda area of the city and attempted to convert the uneducated people there to Christianity.

But the Christians’ lawyer, Sudheer Kumar, told World Watch Monitor his complaint was only lodged after the Christians had already gone to the police to file their own complaint against Hindu Jana Shakti members, whom they accused of abusing them as they handed out the gospel tracts, which they were given permission to do by the local police.

Assistant Commissioner of Police Bhujanga Rao confirmed to local media that the Christians – members of New Blessings Church – had been given permission to hand out the tracts as part of their Easter procession.

“On the eve of Easter, yesterday, Christian brethren celebrating Easter in Dayarguda area were opposed by some men from distributing gospel tracts,” he told local media on Easter Monday.

“With permission from the police, we [the church] took out a peaceful procession, singing hymns, distributing tracts around our area,” one female church member said in a video that circulated on social media. “When we were about to wind up and return back to the church premises, in the last moment, they [Hindu Jana Shakti members] attacked four Christians, and we went running back to their rescue.

“[The men] physically attacked the Christian youth and misbehaved with the women, and even tried to apply vermillion [a cosmetic powder] to the pastor’s wife.” (Vermillion is traditionally worn by married Hindu women, and only their husbands are permitted to apply it for them.)

She added that when she told the men they had obtained permission from the police, they grabbed her hand and ripped the bangles from it, shouting at her: “Do you know the law?” She said they then tore up the letter of permission she showed them, and started beating up some of the young Christian men in the group.

Some of the other church members told World Watch Monitor the men had said to them: “How dare you promote a religion! Will you also accept if we apply vermillion [a Hindu custom] to your forehead?”

“When we [Christians] resisted, they [Hindu Jana Shakti] paid no heed,” the church members told World Watch Monitor. “They called the women prostitutes and the Christians ‘children born out of prostitution’, and many such extremely foul words in the Telugu language spoken in the area.”

“We submitted a complaint to the police narrating the incident,” the leader of the church, who wished only to be identified as Andrew, told World Watch Monitor. “But they [Hindu Jana Shakti] ran ahead of us, to try to be first to give a complaint.”

In the First Information Report (FIR) lodged by the Christians, the Hindus were accused of assault, criminal intimidation, promoting enmity between classes and using force against a woman with the intention to “outrage” her modesty.

“The Hindutva elements are targeting small churches because we are weak, with less members, and also we don’t usually get the high level support from Christian leaders from all frontiers.”

The police assistant commissioner confirmed that three of the Hindu Jana Shakti members had been arrested, including its president Lalith Kumar.

A local source, who requested anonymity, told World Watch Monitor that several politicians from the Hindu nationalist BJP – Prime Minister Narendra Modi’s party – came to the police station to give their support to Kumar and pressure police to file a counter-FIR against the Christians.

“The police filed the FIR against the Christians without any evidence, but only because of the pressure,” the source said.

“What happens is the accused side will now try to silence the voice of witnesses, by threatening them, and, by hook or crook, they will see that no witness appears before the court during the trials, and with no witnesses or evidence, the benefit of doubt goes in the favour of the accused, resulting in their acquittal,” a legal expert, who did not wish to be named, told World Watch Monitor.

“Since the Christians were arrested post the court hours, I went to the magistrate’s house to release them on bail on 3 April,” the Christians’ lawyer, Sudheer Kumar, explained.

“The next day [4 April], we furnished the bail procedure. To safeguard themselves from the accusations, [the Hindus] filed a complaint against the Christians. All the BJP top cadre were at the police station, and have ensured the registration of [the] FIR.

“That evening after their [Hindu Jana Shakti] leaders were released on bail, they went to the church and threatened the Christians; I rushed to the police station and filed another FIR against them [which included charges on outraging the modesty of women].

He said they had used their contacts within the BJP to file the charges.

Pastor Andrew told World Watch Monitor that he and his church members were being spied on by members of the Hindu group and that he had received death threats. He said he is “very scared”, that he fears his phone is tapped and that he was told he would be killed “soon”.

“The Hindutva [hardline Hindu] elements are targeting small churches because we are weak, with less members, and also we don’t usually get the high level support from Christian leaders from all frontiers,” Pastor Andrew said.

“The reason the pastor and the church members are being threatened is they don’t want anyone to speak up when the matter is presented before the court,” lawyer Kumar added.