INDIA: The Indian caste where wives are forced into sex work

For girls and women from the Perna caste, entering the sex trade is a normal next step after marriage and childbirth. 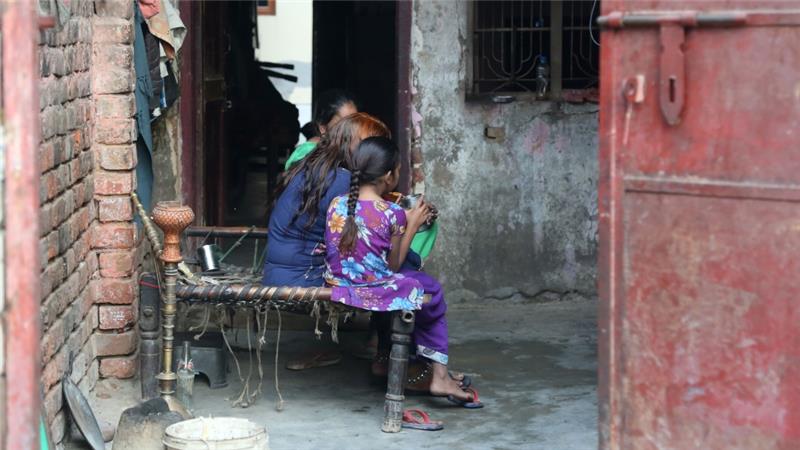 Al Jazeera (28.11.2016) – http://bit.ly/2fCTxfb – When Sita* comes home in the morning, her husband is usually still asleep. She has worked through the night, selling sex on the highways tracing Delhi’s periphery, but she will bathe, cook breakfast, and get the children ready for school before getting some rest herself.

Here, in a tumble-down corner of Najafgarh, a patch of urban villages stitched into the Indian capital’s fraying hem, what Sita does for a living is no secret. Sita belongs to Perna caste, and among the women and girls of this acutely marginalised community, entering the sex trade is a usual next step after marriage and childbirth.

“My first child died shortly after being born. When [my second-born] daughter was around one year, that’s when I started this work,” she says. Married in her mid-teens to a Perna man she hadn’t met before, she estimates that she was 17 when she became the sole earner in her young family.

Now in what she guesses to be her late 20s, Sita still leaves the Perna basti (settlement), each night with other women from the community to tout for customers in “random places”: bus stops, lay-bys and parks far from their own neighbourhood and out of view of the police. They travel in a group, sharing the rickshaw fare and the risk of assault.

“We try to get it done quickly,” Sita explains. They conduct encounters in cars or hidden outdoor nooks. While one woman is with a client, a friend will make sure to stay within shouting distance. Each client pays between 200 rupees and 300 rupees ($3-$4.50). In a night, the women can expect to make as much as 1,000 rupees ($14.60), or as little as nothing.

Leela*, a mother of four in her late 30s, has known since she was “very little” that her community was engaged in what is termed “intergenerational prostitution”. Unlike Sita and many others, she only entered the sex trade when she was widowed, and moved back to Dharampura locality in Najafgarh, her childhood home.

For her, it was the natural path for a woman looking for work: her own mother died young, but she remembers that her aunties used to “go out at night”.

Husbands herded goats, or didn’t work at all. “I don’t know why. You can say it is the traditional way,” she says. But it is less a ritual than a remedy for an inherited economic need. “This work is our compromise. It’s our way to make a living,” Leela explains.

“A Perna woman is born into poverty, into a marginalised caste, and she’s female – so she’s already thrice oppressed,” says Ruchira Gupta, the founder of the anti-trafficking NGO Apne Aap, which has been working with the Najafgarh Perna community for more than five years.

“As soon as she gains puberty, she is married, and after the first child, the husband pimps his wife. And she can’t resist – she only has this community. She feels she has no path of escape. She is consumed for eight or 10 years, and then she is asked to put her daughter into prostitution.”

Gupta explains that girls who resist prostitution are often physically abused by their in-laws, who expect their son’s wife to contribute to the family finances. Leela’s own daughter – now a stay-at-home mum living elsewhere in Najafgarh – moved back in with Leela for a short period to flee her new family’s pressure to start sex work.

“They were threatening her, ‘We will tear your clothes, we will put you on the streets naked,'” Leela says.

With Apne Aap’s backing, she was able to convince an informal community court that her daughter should be allowed to make the choice independently. But one NGO worker explains: “We don’t often meet women as courageous as [Leela].”

Sita pre-empts suggestions that her husband or in-laws pressure her into the work she does, saying: “It’s my own choice,” and pointing out that recently, her husband has found regular work as a driver and earns at least as much as she does.

But even in the absence of coercion, choice is a fraught concept in a community which is not only economically and socially marginalised, but historically excluded from the rights and freedoms of citizenship.

Zoom out from this small community at the edge of India’s capital, and the Pernas become just one dot among many thousands, scattered on the map of what a 2008 government-commissioned report described as “the most vulnerable and disadvantaged sections of Indian society”.

These are the DNTs, or Denotified and Nomadic Tribes of India, who are still more commonly recognised in mainstream society under their colonial-era classification: the Criminal Tribes.

Historically itinerant traders, entertainers, and folk-craft practitioners, DNT communities are often compared with the Roma in Europe. Like “gypsies” elsewhere in the world, whose lifestyles made them difficult to bring under state control, the wanderers were regarded with suspicion by India’s British rulers.

After the Criminal Tribes Act of 1871, a raft of castes were “notified”, that is, branded “hereditary criminals”, alienated from traditional sources of income, and made vulnerable to a range of state-sanctioned abuses.

Following India’s independence in 1947, the stigmatised tribes were “denotified”, but these communities have been unable to shake what academic Meena Radhakrishna calls their “historic disadvantage”.

Welfare programmes have been offered to the most marginalised communities – those social groups classed as the Scheduled Castes (SCs) and Tribes (STs).

But even officially eligible DNT communities, such as the Pernas, who are recognised as “SC”, often do not gain access to these opportunities.

“It is difficult for these people to stake a claim to the government programmes because of the stigma of being labelled as ex-criminal tribes,” says Subir Rana, an anthropologist who has spent time among the Pernas of Najafgarh.

Not only has their past taught the community to be wary of the state, but their alienation from mainstream society has meant many of them are ignorant of their rights.

For example, getting a caste certificate – the necessary proof of eligibility for benefits – is difficult when many community members hold barely any government identification of any kind.

When Apne Aap began a campaign for improved documentation, only four or five individuals in the Perna community had certification of their “SC” status. With NGO intervention, this number has swollen into the 30s – but, workers say, it has been a struggle.

“Government always tries its level best to reach these people,” says BK Prasad, Member-Secretary of the temporary National Commission for Denotified, Nomadic and Semi-Nomadic Tribes, “but even these people have to come to the government. Most of the time, these people do not come.”

He recognises that DNTs may require “a special approach”.

An earlier DNT commission, responsible for the 2008 report, issued a slew of suggestions for government, centring on the recommendation to address the needs of DNTs separately from other disadvantaged social groups. Upon release the report was, in the words of civil servant and consultant to the commission Pooran Singh, “put into the almirah [closet]”.

The new Commission is making a priority of addressing a deep information gap: at this point there is zero reliable, countrywide demographic information on denotified communities, a state of affairs which gives credence to Rana’s sense that “they have become the lowest of the low; they are invisibles”.

While the first order of business is the creation of a comprehensive list of DNT communities, the ultimate goal, according to Prasad, is that “they should be mainstreamed into society in a way that is not too much of a change for them”.

Mainstreaming will be a trickier proposition for DNT communities that have found their way into the sex trade. “Once you become associated with a trade like this, it is very hard to integrate,” says Anuja Agrawal, a sociologist who has studied DNT communities involved in intergenerational sex work.

“Giving up [sex work] happens only when a very concerted effort is made; when other opportunities then become available.”

Back in Najafgarh I speak to a young woman from the Sapera caste, a DNT community traditionally involved in snake-charming and wedding-drumming, who describes the stigma that follows her Perna neighbours.

She has nothing bad to say about them, she explains. “It’s their occupation. How will they survive without it?” But, she concedes, “general caste [non-DNT] people get angry that they do such kind of ‘wrong work’.”

Prasad’s proposal is to remove young girls from their familial contexts: “If we can wean children away, get them admitted to [state] residential schools – because beyond a certain age, slowly, slowly, they will follow their parents. Children imbibe what is happening around [them].”

He adds: “This change will happen slowly. It is true that everyone who is educated up to high school does not get a job.” He estimates that if 10 percent try for a new sort of life, perhaps 2 percent will succeed.

Now 14, Leela’s younger daughter is on one of several Apne Aap scholarships to a private boarding school. She has already progressed further in her education than anyone else in her family. Her classmates don’t know much about her background but they know what’s relevant: she’s bright, and a really good dancer.

I meet her when she is home for a weekend. She is a gazelle of a girl, as nice as Leela, with a gently teasing sense of humour she practises on me, in English, over WhatsApp. Unlike her mother, who never went to school, or her older sister who dropped out to become a wife, she won’t marry until she’s in her 20s, Leela says.

“My daughter says when she gets a job, we’ll go away,” says Leela. For her family, it’s the first glimpse of an alternative path.

Leela’s children – the schoolgirl and the housewife – are not the only signs of a gradually broadening field of options.

*Names have been changed to protect the privacy of individuals.