INDONESIA: A gay ex-policeman takes his battle to court, a landmark case 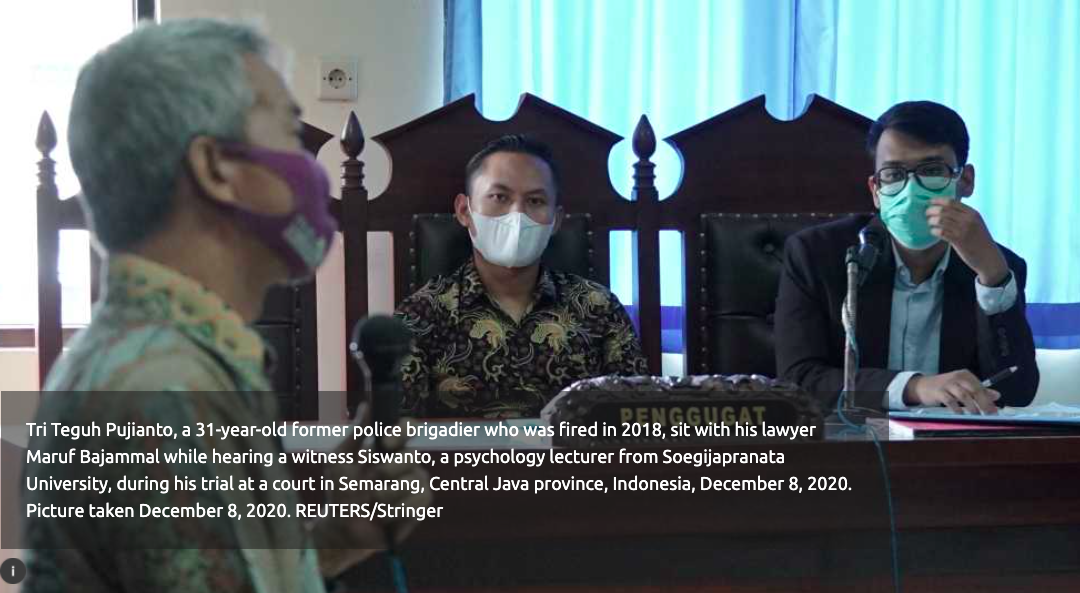 Tri Teguh Pujianto, a 31-year-old former police brigadier was fired in 2018 after 10 years on the job, after police apprehended him and his partner.

Reuters (09.12.2020) – https://bit.ly/2WjIASL – The first gay Indonesian policeman to sue the conservative country’s police force for wrongful dismissal due to sexual orientation was back in courts this week, determined to be reinstated.

Tri Teguh Pujianto, a 31-year-old former police brigadier was fired in 2018 after 10 years on the job, after police in a different town apprehended him and his partner on Valentine’s Day when they were saying goodbyes at his partner’s workplace.

The landmark case in the world’s largest Muslim-majority nation was initially thrown out last year after a judge told Teguh he had to wait until the police internal appeals process was completed. That is now over and Teguh refiled his suit in August in what rights groups say is the first case of its kind.

“This is my fight, my last-ditch effort,” Teguh told Reuters.

“Why won’t they judge my service for all those years? Why exaggerate my mistakes, which I don’t think were mistakes anyway?”

With the exception of sharia-ruled Aceh province where same-sex relations are banned, homosexuality is not illegal in Indonesia although it is generally considered a taboo subject.

The Southeast Asian country is, however, becoming less tolerant of the lesbian, gay, bisexual and transgender (LGBT) community as some Indonesian politicians become more vocal about having Islam play a larger role in the state.

A survey by the Pew Research Center this year also showed that 80% of Indonesians believe homosexuality “should not be accepted by society”.

Discrimination and violent attacks against LGBT people have increased in recent years and police have prosecuted members of the community using anti-pornography and other laws. Lawmakers from four political parties this year have also been trying to garner support, so far unsuccessfully, to pass a bill requiring LGBT people to seek treatment at rehabilitation centres.

The Central Java police have accused Teguh of violating “ethical codes of the national police… by the deviant act of having same-sex intercourse,” a court document shows.

Teguh’s legal team said they are challenging what they call the “elastic” nature of the police code of conduct given there is no mention of sexual orientation in police regulations.

Dede Oetomo, a gay scholar who runs the advoacy group GAYa NUSANTARA, said Teguh had made history, whether he wins his case or not.

“He’s broken the mould because he’s brave,” he said. “My hope is that more activists will emerge from cases like his.”

Teguh now runs a barber shop, a side business that he started in 2013. He said he’s always had the support of family and his friends in the force for his efforts to regain what has been his dream job since high school.

Asked why he is persevering, Teguh said he was fighting not only for himself.

“I want to fight for basic human rights, so there will no longer be arbitrary actions taken against minorities,” he said.