‘I won’t be the last’: Kamala Harris, first woman elected US vice-president, accepts place in history 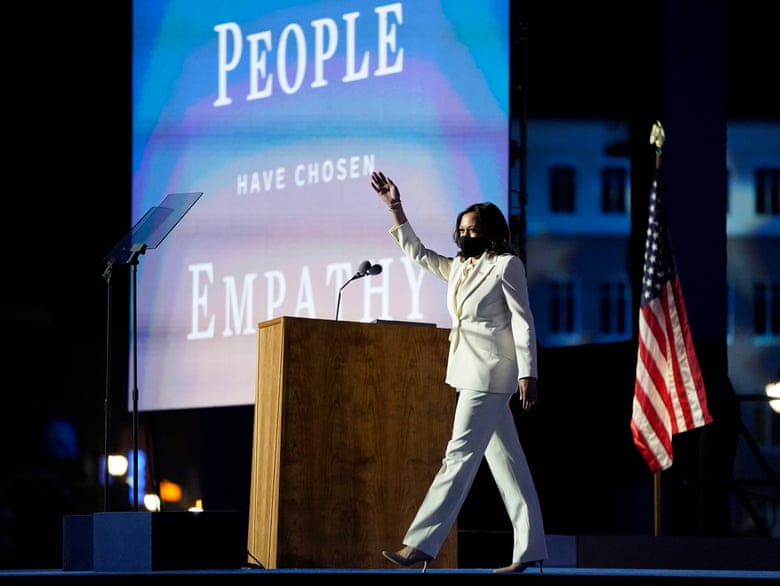 With victory speech, California senator brings tears to eyes of crowd in Delaware.

The Guardian (08.11.2020) – https://bit.ly/2Ie65cw – Kamala Harris accepted her place in history on Saturday night with a speech honoring the women who she said “paved the way for this moment tonight”, when the daughter of Jamaican and Indian immigrants would stand before the nation as the vice-president-elect of the United States.

With her ascension to the nation’s second highest office, Harris, 56, will become the first woman and the first woman of color to be elected vice-president, a reality that shaped her speech and brought tears to the eyes of many women and girls watching from the hoods of their cars that had gathered in the parking lot of a convention center in Wilmington, Delaware.

Wearing an all-white pantsuit, in an apparent tribute to the suffragists who fought for a woman’s right to vote, Harris smiled, exultant, as she waved from the podium waiting for the blare of car horns and cheers to subside. Joe Biden, the president-elect, would speak next. But this was a moment all her own.

She began her remarks with a tribute to the legacy of the late congressman and civil rights activist John Lewis.

“Protecting our democracy takes struggle,” Harris said, speaking from a stage outside the Chase Center on the Riverfront in Wilmington. “It takes sacrifice. But there is joy in it. And there is progress. Because we, the people, have the power to build a better future.”

With Harris poised to become the highest-ranking woman in the history of American government, this milestone marks the extraordinary arc of a political career that has broken racial and gender barriers at nearly every turn. As a prosecutor, she rose to become the first Black female attorney general of California. When she was elected to the Senate in 2016, she became only the second Black woman in history to serve in the chamber.

In her remarks, Harris paid tribute to the women across the country – and throughout history – who made this moment possible.

“I reflect on their struggle, their determination and the strength of their vision, to see what can be, unburdened by what has been,” she said. “I stand on their shoulders.”

She specifically honored the contributions of Black women to the struggle for suffrage, equality and civil rights – leaders who are “too often overlooked, but so often prove that they are the backbone of our democracy”.

As a candidate for president, Harris spoke often of her childhood spent attending civil rights marches with her parents, who were students at the University of California, Berkeley. When protests erupted in the aftermath of the police killing of George Floyd this summer, Harris joined activists in the streets to demand an end to police brutality and racial injustice.

As Biden searched for a running mate, pressure built to choose a Black woman in recognition not only of the role they played in salvaging his presidential campaign – which Biden acknowledged in his remarks on Saturday night – but of their significance to the party as a whole. Yet a narrative began to form that Harris was a somewhat conventional choice, a senator and one-time Democratic rival who brought generational, ideological and racial balance to the Democratic ticket.

But Harris disagreed emphatically, saying that her presence on the stage was a testament to “Joe’s character – that he had the audacity to break one of the most substantial barriers that exists in our country and select a woman as his vice-president”.

Yet Harris’s presence on the ticket was not only a reflection of the nation’s demographic future but a repudiation of a president who relentlessly scapegoated immigrants and repeatedly attacked women and people of color.

In a moment of reflection, Harris invoked her mother, Shyamala Gopalan Harris, who left her home in India for California in 1958, at the age of 19.

“Maybe she didn’t quite imagine this moment,” Harris said. “But she believed so deeply in an America where a moment like this is possible.”

In interviews and on the campaign trail, Harris often quoted her mother, sharing the advice and admonitions of a woman she describes as diminutive in stature but powerful in her presence.

On Saturday, Harris made a promise to the country.

“While I may be the first woman in this office,” Harris vowed, “I will not be the last, because every little girl watching tonight sees that this is a country of possibilities.”

Photo: ‘A moment all her own’: Kamala Harris gives an acceptance speech in Delaware. Photograph: Drew Angerer/Getty Images.