HORN OF AFRICA / EGYPT: Freedom of religion or belief dramatically violated in a number of countries

HRWF (30.06.2017) – Violations of Freedom of Religion or Belief in the Horn of Africa and Egypt are widespread, and vary in their nature depending on the country’s government, levels of democracy, security, and social environments, as a conference at the European Parliament has recently highlighted. Freedom of Religion or Belief greatly intersects with other rights and policy issues in that part of Africa and the EU must understand the root causes of tensions and violence, and be vigilant in examining law vs. implementation and practice to properly develop its external policies in this region.

On 28 June 2017, MEP Tomas Zdechovsky, in collaboration with HRWF, hosted an event in the European Parliament in Brussels to address Freedom of Religion or Belief in the Horn of Africa and Egypt and these subsequent factors. With over fifty participants present, the panel consisted of:

This diverse panel was able to accurately examine and question the many dynamics of Freedom of Religion or Belief in the Horn of Africa and Egypt; including violations stipulated by non-state actors and by governments. As MEP Zdechovsky emphasised, Freedom or Religion or Belief is a grave concern, and the European Union needs to continue efforts to help those who are persecuted for their religion, for these efforts can make a real impact, as they did in the case of Petr Jasek, a Czech Christian humanitarian aid worker sentenced to 20 years in prison but released after 15 months thanks to pressure from the international community.

Non-state actors & religious persecution in the Horn of Africa

In the Horn of Africa, religious minorities often face social hostilities and persecution from non-governmental actors. Dr. Mark Barwick claimed that, particularly in the last two decades, inter and intra-religious tensions have resulted in social exclusion of vulnerable groups, discrimination, and terrorist attacks. Dr. Mark Barwick made reference to two external forces that have exerted influence in the region;

One external force being Christian missionary activities, which mostly come from the US. Dr. Barwick claimed that they are mostly perceived wrongly as a “western intrusion”. The objection to the presence of such missionaries has not come only from Muslims but also from segments of the Christian community, resulting in intra-Christian tensions.

“The increase in Salafist inspired groups in the region; many of which are based on Saudi Arabian thought and funded by the governments of the peninsula;” Al Shabaab is one of such groups.

He highlighted that, “The motivations of attacks however are not entirely religious.” Explaining the recent attack against a Kenyan university by Al Shabaab, that killed 148 students, most of whom were Christians, Dr. Barwick called a “reprisal for the incursion of Kenyan security forces into Somalia”. The attack resulted in a sharp rise in tensions between Muslims and Christians. Dr. Barwick also explained that there are not only “tensions between Muslims and Christians, but there are also intra-Muslim tensions, as al Shabaab has targeted other Muslim groups…The majority of Muslims do not adhere to their rigid interpretation of Islam”. 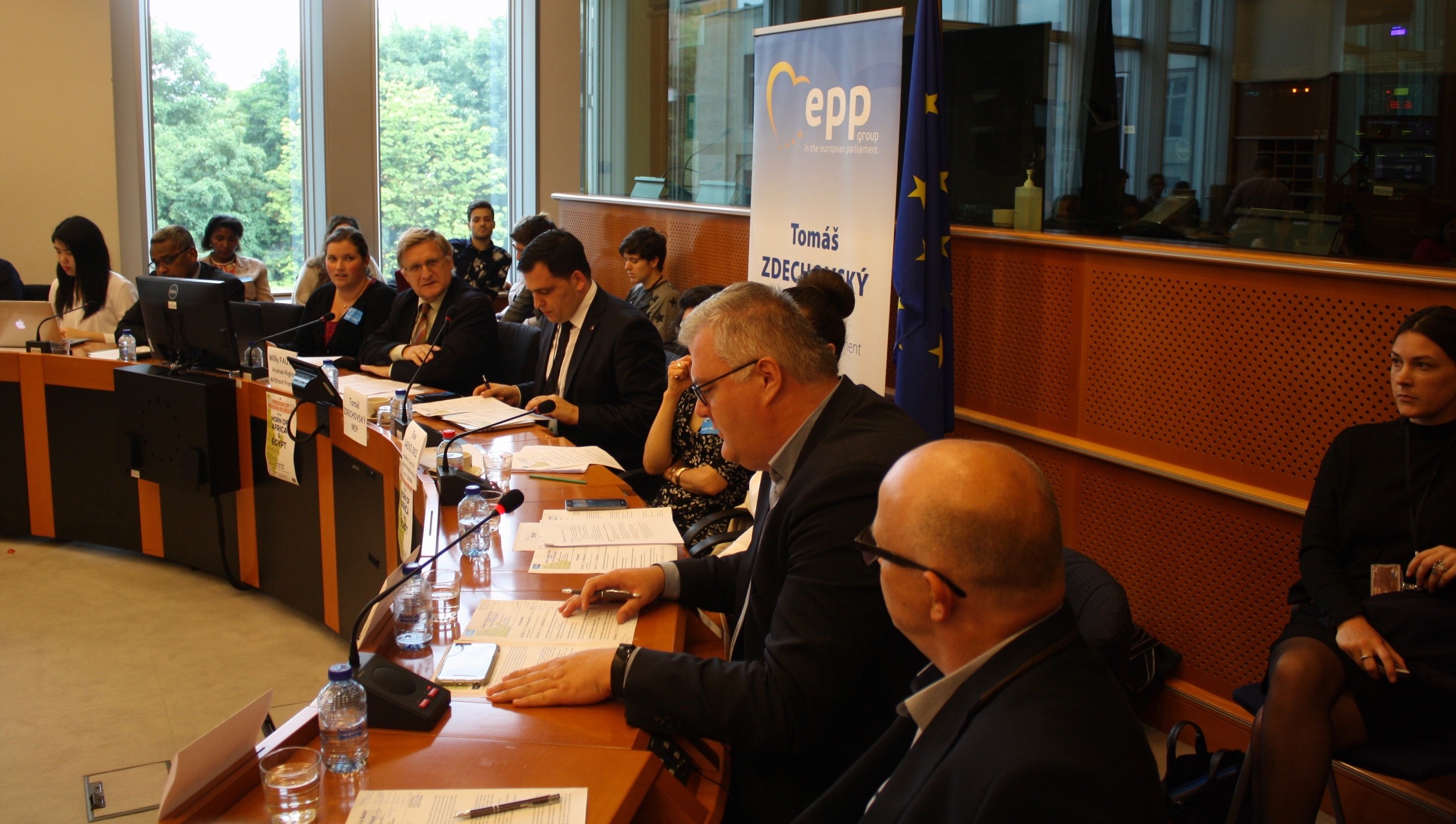 Major Serge Stroobants, of the Institute for Economics and Peace, further details the security dilemmas in the region; specifically Al Shabaab. In regards to terrorism and religion in the region, he explained that:

“terrorism in Africa is very different from what it is in the rest of the world. Most terrorist groups in Africa started from conflicts about land or water between nomadic groups and sectarian groups evolved from there. The top layer that was added to this was religion. If there is a certain pattern; it would be the Salafist pattern aiming at annihilating everything that is not in line with the Salafist interpretation of Islam in which Christians are perceived as infidels and apostates”

“Al Shaabab was not a Salafist movement in the beginning; it was a political movement aiming to expand their territory and population. Religion is a facilitator to gain access to territory and politics. The targeting of religious minorities, Christians being one of them, is a justificiation for recruitment and sponsorship from outside Somalia”.

“al Shabaab works through political fragmentation. Al Shabaab insurgency is highly influenced by political, economic, regional, and clan dynamics. The latter is one of the least understood factors. Somalia has five dominant clans and they are institutionalised in the countries’ reform. Al Shabaab has the most representation and the most diversity in terms of its representation of clans.”

Violations stipulated by governments in the Horn of Africa

Outside of the security issues related to non-state actors, we also see serious human rights violations related to Freedom of Religion or Belief that are stipulated by governments. In particular, there are grave concerns regarding torture, inhumane and degrading treatments, as well as legal complexities relating to constitutional and legal guarantees verses the implementation and practice of these guarantees.

Dr. Susan Kerr, of Christian Solidarity Worldwide, shared her expertise on Eritrea, stating the extreme conditions that FoRB prisoners are often subject to. Dr. Kerr discussed how FoRB prisoners are kept in inhumane locations; including in open-air prisons, holes in the ground, or even in metal containers. Such locations can be especially damaging given the extreme heat in Eritrea. 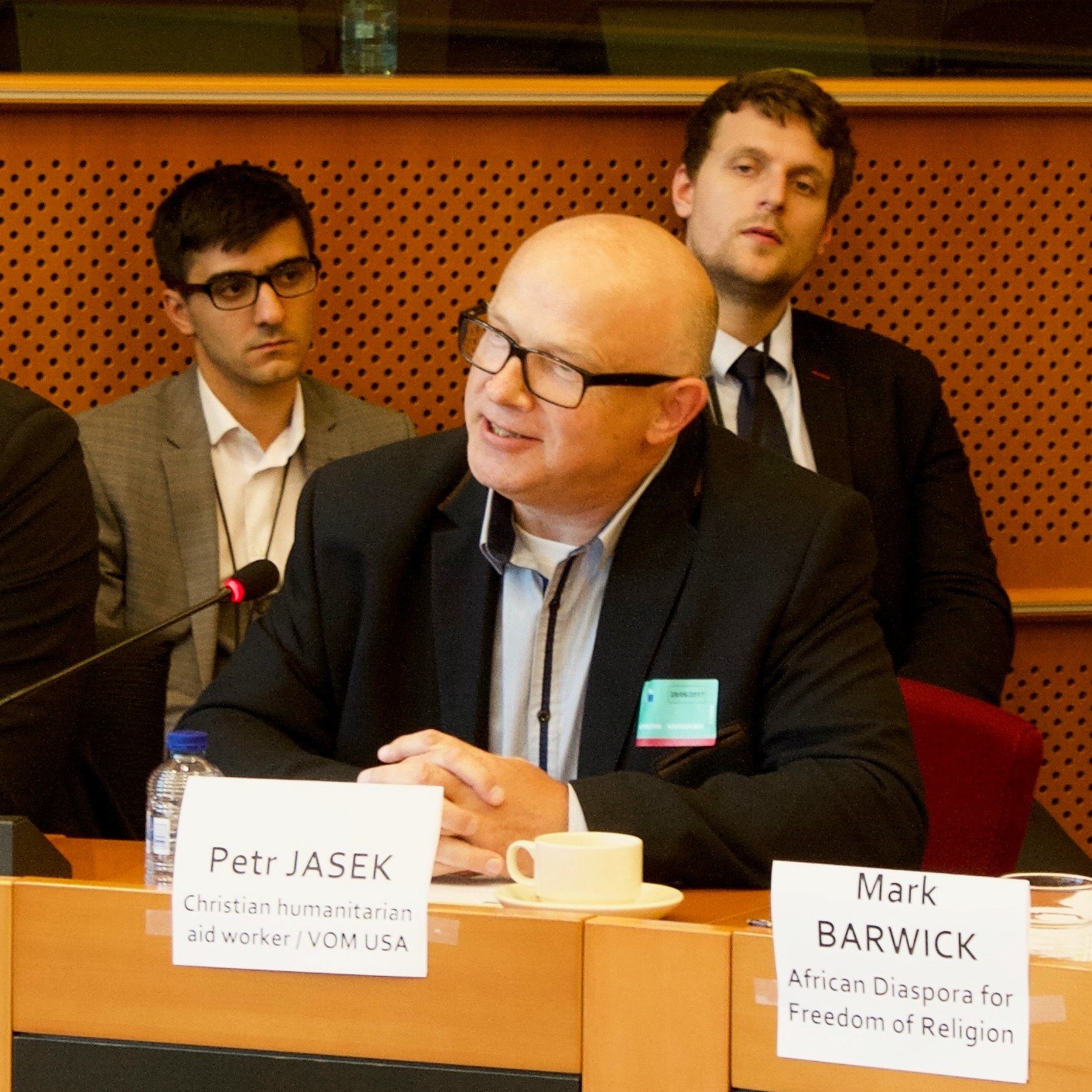 Petr Jasek, a Czech Christian humanitarian aid worker, who spent fifteen months imprisoned in Sudan, gave a testimony regarding his experience in prison. He described how his activities were constantly monitored by Sudanese security prior to his arrest in December 2015. After organising aid for a Christian student who had needed critical medical aid, Mr. Jasek and two colleagues, Hassan Abduraheem and Kuwa Shamal, were arrested and imprisoned.

Mr. Jasek was sentenced to twenty years in prison in Sudan. He was released in February 2017 after a Czech delegation negotiated with the Sudanese officials.  He shared his stories from prison, describing his transfers between five separate locations, in one of which he was placed in a cell with ISIS affiliates. He explained how he was able to hear of efforts by MEPs while in prison and how this gave him hope during his imprisonment;

“In the last prison…I was able to smuggle, in bread, a cell phone that my family sent to me. After eight months of not having direct contact with my family, I was finally able to do so. I started to receive information about what the European Parliament was doing, about what different organisations were doing. Some people in that prison had smart phones, and with those I was able to read the resolution of the European Parliament online. From that prison, I was able to see how many people signed petitions. All of these actions served as encouragement for my Sudanese colleagues and me.”

Mr. Jasek’s story and testimony at the European Parliament captivated the audience and proved the power of the MEPs’ resolution when it comes to European citizens imprisoned in external countries.

Complimentary to Mr. Jasek’s testimony, Willy Fautre, director of Human Rights Without Frontiers, explained the legal mechanisms in Sudan that violate Freedom of Religion or Belief and proposed questions regarding the EU’s relationship with the country.

Mr. Fautre outlined the clear violations that are taking place in Sudan, such as the demolition of Churches and arrest of Christians:

“Last year, the government designated at least 25 churches for destruction. They address multiple denominations, from Catholic to Coptic Orthodox, the Sudan Presbyterian Evangelical Church, Pentecostal Churches and Jehovah’s Witnesses. The government claims that they violate legal designated purposes for these plots of land. Additionally, in 2016, HRWF identified eight Protestant Christians in prison.”

Mr. Fautre concluded that when dealing with a country that violates basic human rights, the EU is confronted with the policy question of whether to enact sanctions or to engage with said country. This is a particularly urgent factor with Sudan, as Fautre explains:

“While the US has for decades opted for an estranged and hostile relationship assorted with sanctions, it has recently moved to a cautious flexible engagement strategy, and the EU, as a soft power, has a privileged engagement with Sudan. The outcome of both strategies has proved to be unsuccessful.

Despite the EU’s financial and human investment in Sudan, no progress in the legislation concerning human rights and religious freedom has been registered and there is no sign that the criminal code will be brought in line with international standards.

In the recommendations of its report in 2016, the EP Intergroup on FORB advocated some process of conditional engagement, saying ‘EU aid should only be provided on the basis of cooperation with international human rights law, protection of FORB or non-belief minority groups.’ Unfortunately, there does not seem to be any other meaningful option to conditional engagement with Sudan but it is easier to say than to put in practice.”

Coupled with the example of Sudan, the case of Egypt proves that it is vital to evaluate the legal prescriptions and the practices on the ground. Oftentimes, national constitutions and laws protect basic rights, but when one investigates the reality on the ground, violations are rampant in many countries.

Eva Saenz-Diez from Academic Council of European Neighbourhood Council / GERMAC (Louvain-la-Neuve) discussed the case of the Coptic community in Egypt. She outlined the official discourse of the state, and the claimed protection that it provides for all citizens;

“President El-Sissi has, on several occasions, demanded Al-Azhar to renew the religious discourse…Al-Azhar has repeatedly condemned…attacks against churches…[and] has recently announced that Al-Azhar will submit a draft law…criminalising hate speech, particularly against any religious beliefs” 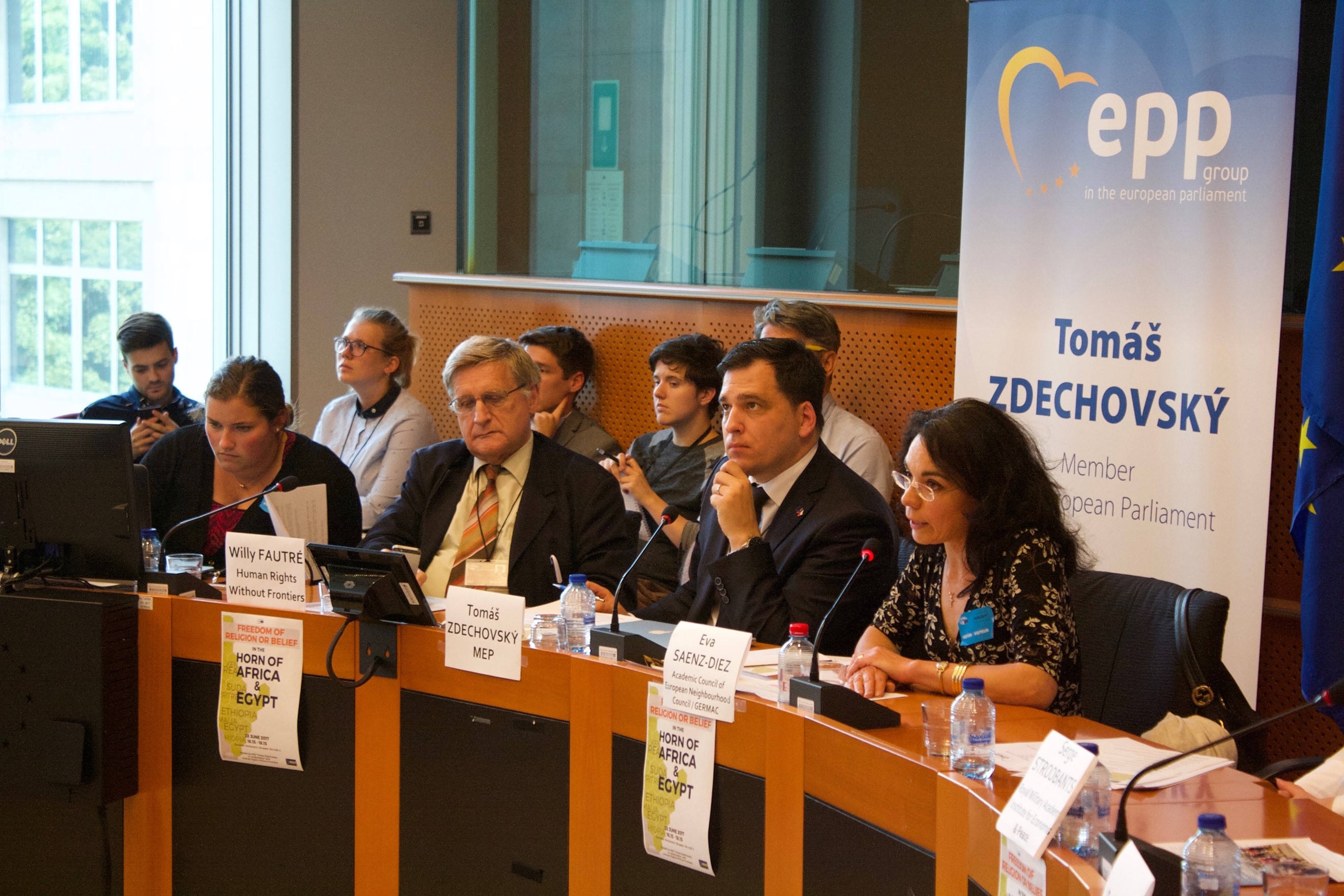 Ms. Saenz-Diez emphasised that on the ground, reality is much different for religious minorities. In Egypt, there is a severe lack of protection for Copts. There have been attacks against the Coptic community perpetrated by terrorist groups and threats and violence from other citizens, a lack of proper and timely intervention from the state and security forces, a lack of proper investigation, accountability measures, and judicial fairness after attacks are carried out, in addition to the blatant new church construction law that the Egyptian Parliament approved in August 2016.

In relation to the role that the West plays, Ms. Saenz-Diez concluded that:

“Western media rarely talks about everyday life. In everyday life, Copts suffer from discriminatory behaviours and measures, or see their beliefs publicly ridiculed or even highly criticized…Furthermore they suffer from derogatory discourse both in governmental and Azhari education systems”

In conclusion, it can be said that Freedom of Religion or Belief is severely violated in the Horn of Africa and Egypt, stipulated both by non-state actors and by governments. With a Brussels view-point, we must understand the root causes of tensions and violence, and be vigilant in examining law vs. implementation and practice to properly develop EU external policies in this region with the aim of improving the situation of human rights and freedom of religion or belief in the Horn of Africa and in Egypt.