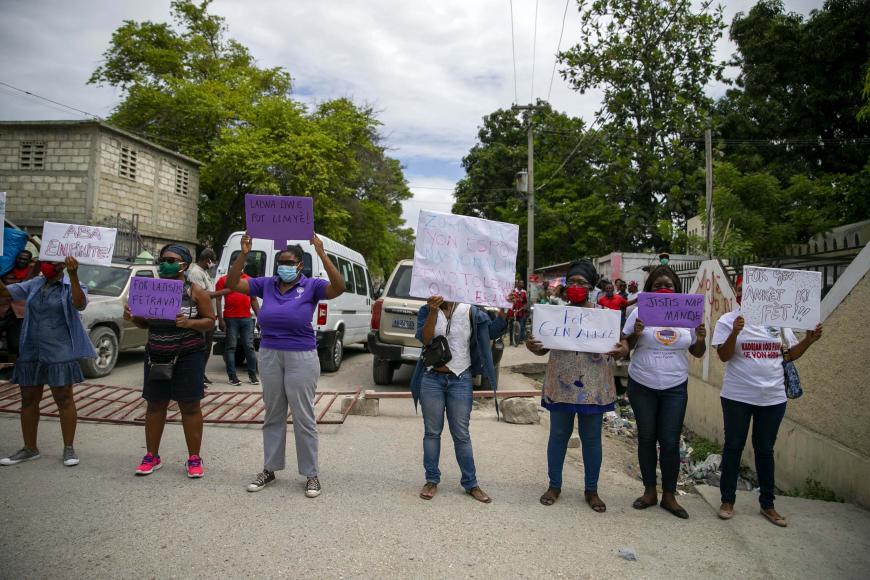 After reports by The Guardian and Human Rights Watch and pressure from Haitian rights groups Kay Fanm, Solidarite Fanm Ayisyèn (SOFA), the National Network for the Defense of Human Rights (RNDDH), and others, over the past seven months, FIFA investigated serious allegations of sexual harassment and abuse against Jean Bart, also known as “Dadou.” FIFA’s Ethics Committee handed him the maximum punishment in football on Friday, November 20, 2020.

“FIFA’s decision is a vindication for all the courageous survivors of abuse and witnesses who came forward to report sexual abuse,” said Minky Worden, director of global initiatives at Human Rights Watch. “As Human Rights Watch has documented, they faced personal threats and stigma in society. FIFA’s punishment is an important signal that if you are an abuser in football, your days are numbered.”

Jean-Bart had been president of the Haitian Football Federation (Fédération Haïtienne De Football, FHF) since 2000. Following their investigation into evidence of systematic sexual abuse of female players, FIFA’s Ethics Committee found Jean-Bart guilty of “having abused his position and sexually harassed and abused various female players, including minors.” He is now banned from the sport for life in Haiti and internationally, and fined 1 million Swiss francs (approximately US$1.1 million). He can appeal to the Court of Arbitration for Sport, and has said he will.

Survivors of sexual abuse in Haiti told Human Rights Watch that they want justice for abuses by the president but also football sanctions for all officials who aided and knew about abuses in the national football academy.

“Playing for Haiti, I gave my heart,” one women’s national team player told Human Rights Watch. “Without us players, you don’t have a game. I am so happy Dadou can’t abuse his power and stop us from achieving our dreams anymore.”

Since May, Human Rights Watch has worked together with the international football players’ union FIFPro, who provided lawyers and support for athletes, helped to interview witnesses, and collected evidence of systemic human rights abuses in Haitian football, including confiscation of players’ passports, labor rights abuses, grooming child athletes for sexual exploitation, and threats to kill witnesses and survivors.

Jean-Bart has been Haiti’s football federation president since 2000 and was re-elected to a sixth term in February. Jean-Bart has publicly denied all allegations and successfully sought to have a judge in Haiti purportedly “clear” him of all charges and exonerate him. That a judge made this pronouncement the day before Jean-Bart’s lifetime ban is testament to the power he wields in Haiti and the challenge survivors face in taking on Jean-Bart and his allies. In August, Human Rights Watch documented threats and attacks on witnesses and whistleblowers, which could prevent them from coming forward with evidence of abuses.

FIFA’s statement signals other sanctions against abusers and officials who knew about or facilitated abuses in the Haiti federation could come soon:

“The aforementioned ethics proceedings are part of an extensive investigation concerning Mr Jean-Bart, as well as other officials within the FHF, who were identified as having allegedly been involved (as principals, accomplices or instigators) in acts of systematic sexual abuse against female football players between 2014 and 2020. The proceedings are still pending with respect to other FHF officials.”

It is essential for FIFA to discipline others who took part in sexual abuse and to remove them from football, Human Rights Watch said. FIFA needs to ensure ongoing therapeutic and logistical support for players, and enforcement of any bans and fines.

“In addition to protecting survivors and witnesses, FIFA should exercise its authority to ban and sanction all officials implicated in sexual abuse or threatening or menacing witnesses during its investigation,” Worden said. “In its best form, football is fun, empowering, and healthy for young people and FIFA should do its part to ensure player safety.”