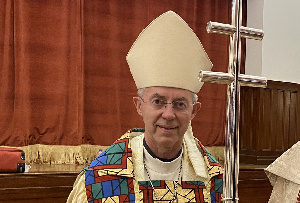 Ghana Web (27.10.2021) – https://bit.ly/3BrADgn – The Archbishop of Canterbury, the Most Revd. Justin Welby, has reminded members of the Anglican Church of the position they hold when it comes to the issue of same sex marriage.

He said in a statement on Tuesday October 26 ahead of the debate on the anti-gay bill which is currently before Ghana’s Parliament that : “I am gravely concerned by the draft anti-LGBTQ+ Bill due to be debated by the Ghanaian parliament. I will be speaking with the Archbishop of Ghana in the coming days to discuss the Anglican Church of Ghana’s response to the Bill.

“The majority of Anglicans within the global Anglican Communion are committed to upholding both the traditional teaching on marriage as laid out in the 1998 Lambeth Conference Resolution I:10, and the rights of every person, regardless of sexual orientation, before the law. In Resolution I:10, the Anglican Communion also made a commitment “to assure [LGBTQ+ people] that they are loved by God and that all baptised, believing and faithful persons, regardless of sexual orientation, are full members of the Body of Christ.”

“Meanwhile on numerous occasions the Primates of the Anglican Communion have stated their opposition to the criminalisation of same-sex attracted people: most recently, and unanimously, in the communiqué of the 2016 Primates’ Meeting.

“I remind our brothers and sisters in the Anglican Church of Ghana of these commitments.

“We are a global family of churches, but the mission of the church is the same in every culture and country: to demonstrate, through its actions and words, God’s offer of unconditional love to every human being through Jesus Christ.”

Meanwhile, the Majority Leader, Osei Kyei Mensah Bonsu, has explained the steps that the anti-gay bill will go through before its passage.

The Suame lawmaker told TV3’s Dzifa Bampoh in interview on Tuesday October 26, the day Parliament resumed sitting that, “Let me be emphatic, it will not be done today, the reason is simple you want to let people follow processes and procedures of enacting legislation.

“Why because, it has just been referred to the Committee.

“That is the first reading, the committee then will go to sit on it and allow civil society organizations, allow religious groups who have so much interest, allow other groups, allow the general public who have interest to express the interest appropriately usually in a memoranda but there are some of them who will not encapsulate into any memorandum and then submit same to the committee, they will want to appear in person before the committee.”

The Promotion of Proper Human Sexual Rights and Ghanaian Family Values Bill was laid in the House on Monday, August 2 and read for the first time.

Reading for the first time, a clerk in the legislative assembly stated that the Bill proscribes lesbian, gay, bi-sexual, transgender, queer and intersex (LGBTQI) and other related activities and propaganda or advocacy and promotion for same.

It also came to light that it supports protection for children and persons who are victims or accused of homosexuality.

“For the first time, it is referred to the Committee on Constitutional, Legal and Parliamentary Affairs for consideration and report,” Mr Asiamah Amoako, who is also the MP for Fomena, directed.

The controversial bill has already divided opinion in the Ghanaian public discourse.

While some, particularly the religious and traditional groupings, have supported the Bill and hopeful of its passing, others say it could incur the wrath of the international community against Ghana.