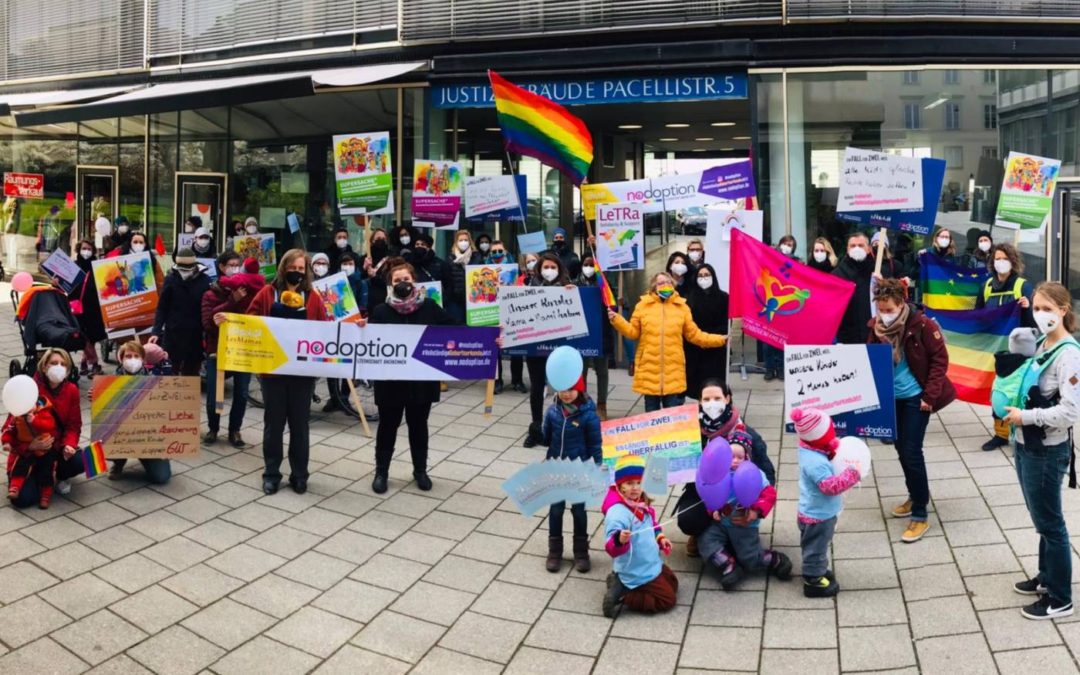 Over a dozen lesbian couples have gone to court seeking to reform Germany’s civil code, which does not recognise lesbian parents

Openly News (06.05.2021) – https://bit.ly/3hqfwok – When Inga celebrated the birth of her first child with her wife Jenny, the last thing she expected in her bid to be recognised as the baby’s second mother was a criminal record check – so she went to court to change the law.

In Germany, only the biological mother is legally recognised as a parent and her female partner must go through a formal adoption process to become the child’s second parent, even if they are married. The process can take years.

“They asked me for a medical certificate, an HIV test, my criminal records, a self-written report of my life and photos of me with the child, among other things,” Inga, 38, told the Thomson Reuters Foundation.

“There is no information available about how these things are assessed: how healthy do I have to be in order to be allowed to be a parent? How much do I have to smile in the pictures? Or how much money should I earn?”

Inga and Jenny are among more than a dozen lesbian couples who have gone to court since August seeking to reform Germany’s civil code, which does not recognise lesbian parents, forcing the second woman to apply to adopt her own child.

Cases are being heard in family courts around the country, with two cases heading for the federal constitutional court – where a ruling in favour of the women could force the government to change the law.

Inga was traumatised by the nine-month wait to be recognised as the mother of her son, born in 2018. She had to take him to hospital multiple times when he fell seriously ill, as Jenny had returned to work, but she had no legal parenting rights.

“I was not allowed to take any decisions regarding his health,” said Inga, who declined to give her full name as the case involving her parental rights over her second child, filed in December, is ongoing.

“They would not consider me his mother legally.”

Germany is one of the most liberal countries in the world in terms of LGBT+ rights. Gay sex has been legal since the 1960s and LGBT+ people have wide-ranging workplace discrimination protections and are allowed to serve in the military.

Yet, in parts, it remains a conservative country.

A 2019 study by the Robert Bosch Stiftung, a charitable foundation, found that 21% of Germans did not believe gay men or lesbians should be able to have children.

Same-sex marriage was introduced in 2017, but parliament has rejected a Green Party bill seeking to automatically recognise lesbian couples as co-parents. Another bill, sponsored by the Social Democrats (SPD) last year, never made it to parliament.

The “Nodoption” or no adoption initiative began with Christina Klitzsch-Eulenburg and Janina Eulenburg who filed a case in August seeking to be recognised as co-parents of their child.

“It is discriminatory that we are required to adopt our own child,” said Klitzsch-Eulenburg, whose case has been adjourned until the constitutional court rules on the other two lawsuits.

“There’s something wrong in a democracy when a minority is so poorly protected.”

Germany falls mid-way between countries like Britain, Spain and Austria, which grant joint parenthood from birth, and East European states that do not allow second-parent adoption, says the Network of European LGBTIQ Families Associations.

Berlin-based Carrie and Marie-Luise are one of two couples whose case was referred on to the constitutional court in March.

“We are doing it for our children, but also for all the other rainbow families in a similar situation,” said Carrie, who asked for her full name to be withheld.

Lawyer Lucy Chebout, who represents several “Nodoption” families, believes it could take about two years before a ruling is made. But she is optimistic.

“The winds seem to be changing,” Chebout said, adding that the law “needs to be reformed urgently”.

But action is unlikely before the Sept. 26 election, which will give Germany its first new leader in 16 years as Chancellor Angela Merkel steps down.

Polls show the Greens overtaking Merkel’s ruling CDU/CSU alliance, with a coalition between the two seen as the most likely scenario after the election.

“If they don’t do anything now, with the September general elections and the coalition negotiations afterwards, nothing might happen in the next year and a half,” said LSVD spokesman Markus Ulrich.

But the chances of changing the law through parliament remain slim, LGBT+ activists say, given that the conservative CDU/CSU – which is in a grand coalition with the SPD – did not back its junior partner’s proposed bill last year.

The CDU/CSU did not respond to requests for comment.

The SPD-led family ministry said in an emailed statement that “sadly it has not been possible to reach an agreement with our coalition partners” regarding legal reform.

Klitzsch-Eulenburg is angered by the delays.

“It cannot be that my son might have to wait until he’s five or six years old to have two legal parents,” she said.