Daily Mail (18.03.2017) – http://dailym.ai/2mkHzKp – Right-wing extremists in Germany have hampered the construction of a mosque by erecting ten large crosses at the site.

The group, planted the wooden structures in the small village of Marbach, near Erfurt, in the central eastern state of Thuringia, in early March.

The owner of the site has said he plans to take legal action against the activists, named as ‘Citizens for Erfurt’. 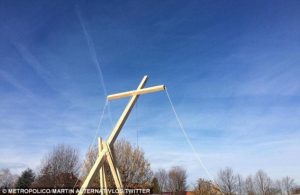 The mosque is being constructed for the Ahmadiyya Muslims in the area. The sect of Islam was founded in the 19th Century by Mirza Ghulam Ahmad.

The community’s imam, Imam Said Ahmad Arif, said the move by the right-wing demonstrators would not stop the construction of the Mosque.

He added that the demonstrators were in the minority and that the Muslim community had received support from a range of politicians, apart from the growing right-wing populist party Alternative for Deutschland (AfD).

On the Citizens for Erfurt Facebook page, the group wrote: ‘We built a sign of identity and our way of life. For the preservation of our culture.’

He said: ‘There is no reason to ram ten crosses into the ground as a sign of battle. The cross of Jesus really stands for love, for love of your neighbor and your enemies.

According to our constitution, this freedom is not only for Christians but also for Jews and Muslims. Therefore, we support the right of the Ahmadiyya community to set up a mosque here.’

But Corina Herold, spokeswoman in the Thuringia state parliament, said the planting of the crosses was a ‘fundamentally good’ action.

She claimed that Muslims do not need a mosque in which to worship and should be content with prayer houses.

A spokesperson for the Thuringia state government said they could not remove the crosses because they had been erected on private land.