GEORGIA: Who are right-wing forces that attacked Georgia’s LGBTIQ+ ? 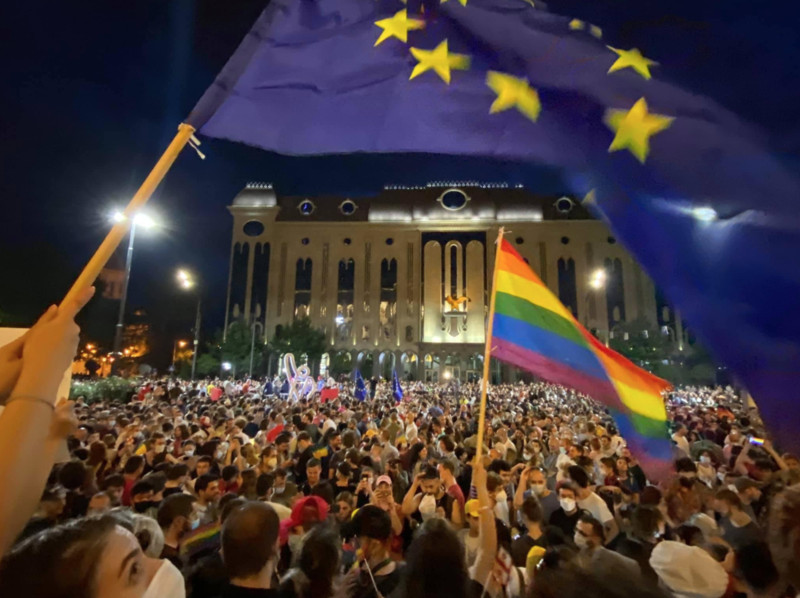 Who are right-wing forces that attacked Georgia’s LGBTIQ+ ?

By Gillian Kane And Mariam Kvaratskhelia

EU Observer (13.07.2021) – https://bit.ly/3edGWv2 – As citizens around the world mark the closing of gay pride month with celebratory marches and parades, in Tbilisi, Georgia, organisers and activists are fighting for their basic right to assemble.

In this former Soviet Republic in the Caucasus, LGBTIQ+ rights have long been a litmus test for democracy and tolerance.

On 5 July, Georgia failed that test when organisers of Tbilisi Pride were confronted with violence by counter-protestors and forced to cancel the march.

Georgian prime minister Irakli Garibashvili had accused the “radical opposition” of planning the Pride march in order to sow “unrest.”

Following his statement, mobs stormed and ransacked the office of the Pride organisers while Orthodox priests and others attacked journalists.

Police stood by and failed to prevent the violence.

These events illustrate how LGBTIQ+ advocates in hostile countries like Georgia – at great personal risk – must push boundaries to create the public space that will allow them to truly celebrate.

Pride marches, starting with Stonewall in 1969, have always been an evolution. Georgia’s LGBTIQ+ movement is diving headlong into that clash, yet also picking up some support in the process.

The day after the violence unfolded, over 7,000 people waving rainbow flags marched down the capital’s main street to the Georgian parliament. This show of solidarity with the LGBTIQ+ community was brave and unprecedented.

Just weeks before Tbilisi Pride the ultra-conservative Georgian activist, Levan Vasadze, who is affiliated with the group that organised the counter-protests, held a press conference at the Tbilisi Marriott Hotel.

Seated next to Vasadze as he announced his intention to enter Georgian politics was the American anti-LGBT activist Brian Brown. The moment encapsulated how even as US president Joe Biden tries to normalise US foreign policy, Trump allies continue to work to promote illiberalism abroad.

Brown vowed at the press conference to engage support for Vasadze in the US, including from Steve Bannon, while also teasing the promise of support from “president Trump himself.”

Brown did all of this despite his 501(c)3 non-profit, the International Organization for the Family, which includes the World Congress of Families, being barred from campaigning for or against political candidates under US law. American authorities should take action.

Brown first rose to prominence in the late naughts with his campaign against same-sex marriage in California and his creation of the National Organization for Marriage.

After the battle against same-sex marriage in the US was lost, he turned his attention abroad becoming president of World Congress of Families in 2016.

Notably, Brown’s election to this position was announced while he was in Tbilisi at a WCF conference where anti-LGBT forces gathered to “establish a beachhead in the region.” In addition to his collaboration with Vasadze, Brown has nurtured relationships with illiberal leaders in Europe such as Hungarian prime minister Viktor Orban and former Italian minister of the interior, Matteo Salvini.

The WCF was formed in Russia in 1997 at a meeting between Allan Carlson, an American academic and former official in the Reagan administration, and Russian intellectuals.

WCF has been designated an anti-LGBTI hate group by the Southern Poverty Law Center. Brown continues fostering relationships with Russia and after Donald Trump was elected president, he worked to unite Russian and American conservatives.

Levan Vasadze, who made his fortune in Russia, also shares connections to the Kremlin. Alexander Dugin, a Russian ultra-nationalist who is widely considered to be the Kremlin’s chief ideologist—his nickname is ‘Putin’s Brain’—is a close associate. The two met immediately after Vasadze launched his political movement last month.

Vasadze’s attacks against the Georgian LGBTI community are well-documented.

In 2019 he organised illegal gangs to break up the first Tbilisi Pride.

Brian Brown was in Tbilisi and joined Vasadze before a crowd gathering on the steps of a church to protest the pride march. Though Vasadze was investigated by the ministry of interior for creating vigilante patrols, there were no consequences.

This year, Vasadze reprised his threats to organizers and the government, and to great effect. Tbilisi Pride was cut short because of violent intimidation, likely incited by Vasadze and Garibashvili’s rhetoric.

To fight this wave of repression, Georgian officials must condemn the violence and prosecute those responsible. And US authorities must hold Americans accountable to the damage they do to democracy abroad in violation of US law and against human rights.