FRANCE: No crosses in a public place: 97,000 people sign a petition against the removal of the cross overhanging a statue of John-Paul II 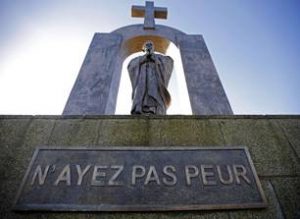 HRWF (01.12.2017) – http://bit.ly/2ytNaUX – As of 1st December 2017, more than 97,000 people have signed an online petition protesting against the ruling of the Council of State to remove a cross overhanging a statue of the late Polish-born Pope John Paul II in Ploërmel, (Brittany, Western France).

The petition “opposes the removal of the cross from a public space and emphasises the Christian roots of Europe”. It is addressed to the European Parliament, the centre-right European People’s Party and the European Court of Human Rights.

Gifted to Ploërmel by the Georgian-born Russian artist Zourab Tseretel, the statue which features a cross on the arch framing it, was installed in a public square in October 2006.

A local citizens group then launched a legal drive to remove the cross citing a century-old French law on the separation of church and state, but the town’s mayor refused.

Controversy erupted when in late October France’s top administrative court ruled that the cross must go in line with the 1905 law forbidding “raising or affixing any religious sign or emblem” in a “public place”. The court gave the town of Ploërmel six months to remove the cross above the papal statue.

According to the 1905 Law on the separation of state and religion, no religious symbol can be displayed in the public space. However, those pre-existing the law can remain in place in the public space, can be repaired or can be totally replaced.

On 26 November, 350-400 people organized a demonstration near the statue to express their opposition to the removal of the cross.

Although the statue of the late pontiff itself is not in question, the court’s move drew ire in heavily Roman Catholic Poland where the Polish-born saint is widely revered and religious symbols are not restricted by law.

Recommended reading (in French) about the Ploërmel case: