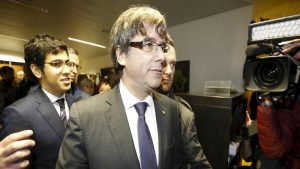 The Parliament Magazine (16.11.2017) – http://bit.ly/2hLFia9 – Since the issuing last week by a Spanish judge of a European Arrest Warrant (EAW) against Catalonia’s ousted president Carles Puigdemont, the EAW system has once again come under the hungry glare of the media spotlight.

Once issued by an EU member state, an EAW requires another member state to arrest and hand over a criminal suspect or sentenced person to the requesting country for trial.

The EAW is an important tool in combating serious cross-border crime and terrorism and the EAW system is founded on mutual recognition, a principle which itself relies on mutual trust in the judicial systems of all EU member states.

Unfortunately, the reality is different. Not all EU member states have a judicial system that is in-line with EU standards, and some countries rightly deny the surrender of a wanted person to another EU member state due to the risk of an unfair trial and poor detention conditions.

Currently, a number of flaws in the EAW system have been identified by members of the European Parliament, which they have asked to be remedied in order for the EU to avoid unjust cases in the future, along with increased mistrust in the EAW.

On 27 January this year, British MEP Claude Moraes, Chair of the European Parliament’s Civil Liberties, Justice and Home Affairs Committee, expressed his concerns in a parliamentary question in which he urged the European Commission “to prevent the system from being abused, a problem compounded by cases of member states failing to protect the basic rights of individuals when issuing EAWs.”

Takkula said that “during the 2010-16 period, Poland and Romania issued to the UK 13,722 and 6,033 requests respectively, while the UK only issued 73 and 49 requests to these countries. One of these cases concerns Alexander Adamescu, a German citizen living and working in the UK, whose father died in prison after he was denied an early release despite being seriously ill (in a coma) and aged 68.”

He added that each surrender procedure had a cost: at least €25,000.

Interestingly, Věra Jourová, Commissioner for Justice, Consumers and Gender Equality answered on behalf of the European Commission that it “is aware that sometimes European arrest warrants (EAWs) are being used in a non-proportional manner, meaning that the issuing judicial authorities use it in trivial cases and/or instead of other EU instruments (such as the European Investigation Order or the European Supervision Order).”

Jourová concluded that “surrender procedures are sometimes also affected by poor prison conditions that may result in risks of violation of the fundamental rights of the person requested under EAW.”

She continued, “As clarified by the Court of Justice of the European Union in the Aranyosi – Caldararu judgment, the executing national authority must postpone and possibly put to an end the execution of a EAW if, following exchanges with the issuing judicial authority, it finds a real risk of violation of fundamental rights of the requested person in the issuing state.”