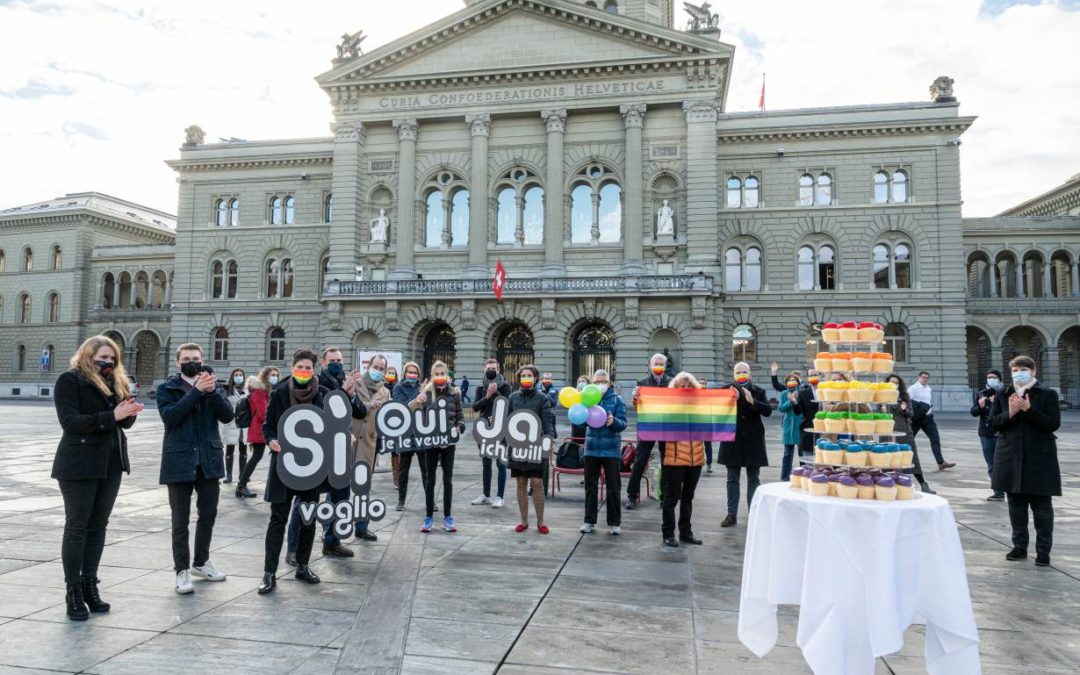 Same-sex marriage or civil partnership is legal in 30 European countries, but laws allowing lesbian couples to have children – through adoption or sperm donation – have lagged behind

Thomson Reuters Foundation (26.04.2021) – https://tmsnrt.rs/3xwcXXu – It took Leonie Plastina and her wife Sonja years of careful research – poring over LGBT+ rights laws and private medical costs in various European countries – to fulfil their dream of having children.

The Swiss couple consider themselves lucky – Sonja conceived in their first round of in-vitro fertilisation (IVF), which they eventually did in Spain. But their costly, cross-border quest highlights the challenges lesbian couples face to parenthood.

“It makes you painfully aware that you’re not really the same,” Plastina said on a video call. “You almost feel like you are living in a parallel world, where you are treated different just because of the fact of who you love.”

Same-sex marriage or civil partnership is now possible in 30 European countries, according to LGBT+ advocacy group ILGA-World, but legislation allowing lesbian couples to have children – either through adoption or sperm donation – has lagged behind.

Lawmakers in Switzerland, where civil partnerships have been legal since 2007, voted in December for same-sex marriage, a law that also included joint adoption and access to donated sperm for married lesbian couples.

The law is expected to be challenged in a referendum later this year, but polls show large majorities in favour of the policies, meaning couples like the Plastinas could soon be able to get fertility treatment in their home country.

The couple, who got a civil partnership in 2016 but consider themselves married, are now expecting their second son, after transplanting a frozen embryo left over from their first round of IVF.

In total, they have spent about $15,000 on their fertility treatments, not including travel costs, a price too high for many. Leonie also had to adopt their son, Joshua, once it became legal to do so in 2018, which took almost two years.

“Many factors could influence (opponents): a conservative cultural approach, a religious heritage linked to the ‘sanctity of life’ concept, the manipulation of these issues for political consensus,” Elena Falletti, a law researcher at University Carlo Cattaneo in Italy, said by email.

Switzerland’s largest party, the People’s Party (SVP), opposes the same-sex marriage and IVF law, saying on its website that the proposals defy “a natural order that no ideologue can ever change”.

Laws banning lesbians from having fertility treatment at home send many abroad in their quest.

Emilie Jouvet, a lesbian filmmaker from Marseilles in France, spent 11,000 euros ($13,270) on seven rounds of artificial insemination and two rounds of IVF in Belgium, before finally falling pregnant.

French President Emmanuel Macron pledged to legalise IVF for single women and lesbian couples in 2017, and the measure won preliminary approval before being blocked by senators earlier this year. Lawmakers must now seek to reach a compromise.

Campaign group Manif Pour Tous, which also mobilised large protests against same-sex marriage before it was legalised in 2013, hailed the senators’ vote in a statement on its website, calling it a “victory for the best interests of the child”.

Campaigners held a “Dyke March” in Paris on Sunday, ahead of Lesbian Visibility Day on April 26, to protest against the removal of lesbians and single women from the bioethics bill.

“We demand, among other things, anonymous assisted reproduction by default, free and reimbursed for all, without any conditions,” Lea Haurie-Hontas, a spokeswoman for Les Collages Lesbiens, the group planning the march, said by email.

But even in countries where fertility treatment for lesbian couples is legal, there are demands to make state funding for the treatment equal to that guaranteed for straight, infertile couples.

In much of England, same-sex female couples have to pay for six cycles of intrauterine insemination (IUI) – which is cheaper but generally less effective than IVF – at private clinics before being offered six free cycles of IUI, and then IVF.

In comparison, heterosexual couples are offered three free cycles of IVF if they have not conceived after two years of unprotected sex.

One cycle of IUI costs between 700 and 1,600 pounds ($2,220), according to government estimates, while donor sperm costs at least 850 pounds – money that LGBT+ campaigners say many struggle to afford.

Despite the costs, more lesbian couples are turning to fertility treatment to start a family, accounting for 2,151 IVF cycles and 2,599 IUI cycles in 2018, up from 320 and 875 a decade earlier, according to the most recent official data.

The NHS funded 14% of those IVF cycles, compared to 39% for heterosexual couples, the data showed.

However, Beazer has since had two miscarriages and, having spent about 17,000 pounds, the 34-year-olds cannot afford to pay for more fertility treatment right now.

“For some people who would be amazing parents, it’s just unaffordable,” Pearson said.